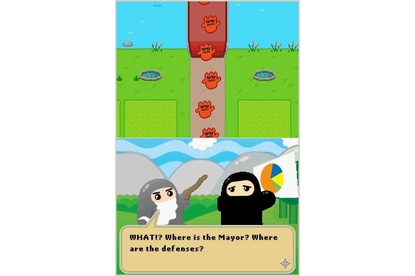 Ninjatown is bursting with charm and personality and it's found the perfect fit on a system that is just as original and unique. And while it may not appeal to the masses, those who do play it will not be disappointed.

While not as adorable as the plush toys that Ninjatown is based on (and harder to hug) this strategy game has a leg up on the stuffed-ninja-toy-line in a number of other departments — most noticeably in complexity, depth and level of involvement. That's not to say, however, that Ninjatown is an overly complicated strategy game. In fact, as far as the genre is concerned, Ninjatown is as simple as they come. But in this unique game's case that doesn't end up being a shortcoming; simplicity is one of its strengths.

Ninjatown is a pretty straightforward, tower-defence strategy game. As various demons approach your village of ninja, you are given the task of building up your stealthy defences in order to fend off the waves of minions from reaching your cherished cookie stash. This is done by placing various ninja huts along the predefined monster path and hoping your ninja hut occupants (ninja) have what it takes to defeat the various undead bruisers. For the most part, that's the basic premise of the title, and while the design is fairly simple, the game manages to stay entertaining through diversified level objectives and a well-balanced difficulty progression.

After the completion of each level, the game further reveals its plot through storyboard-style cinemas that are usually very entertaining and funny. In fact, this is probably the game's strongest suit: it's brimming with personality. The cast of charming ninja and bothersome demons are endowed with such appealing quirks and foibles that each of them remains memorable, ensuring that at the very least this game becomes a cult hit.

State of the martial art?

Unfortunately, Ninjatown isn't without a few flaws. Despite the fact that the game fends off monotony with varied level goals and decent balance, you'll occasionally have to utilise trial and error to figure out exactly what is required to defeat each demon horde. And the graphics, while intentionally simple, also can be seen as a weakness. The art for some of the secondary, background objects is often too basic and just looks wrong, both in proportion and perspective. However, this game places little importance on trying to be the most technologically-advanced title, and instead focuses on the most important aspect of any video game: being fun. And in that, it succeeds in spades.