Final Fantasy: The 4 Heroes of Light

Final Fantasy: The 4 Heroes of Light on Nintendo DS has undeniable artistic charms but suffers from an underdeveloped story 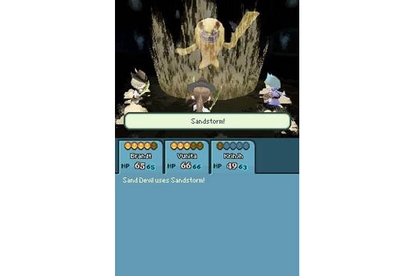 Matrix Software should have a big, friendly wooden sign hanging in front of their office in Tokyo -- a sign branded with a happy caricature of a black mage right below the text, "Ol' fashioned Final Fantasy just like Papa Sakaguchi used to make!" Their work on the DS remakes of Final Fantasy III and IV were particularly devoted to bringing the difficulty and simplicity of 8-bit RPGs into the modern age. The 4 Heroes of Light, their first original Final Fantasy, marries the job system of FFIII DS and the intense difficulty of FFIV DS with the stringent item management and storytelling of vintage Dragon Quest. While the game can be both engrossing and beautiful, it is ruined by wild shifts in difficulty and shallow storytelling.

The titular four heroes are teenage citizens of the Kingdom of Horne. You begin as one of these plucky, unnamed youths celebrating his birthday by reporting to the king for duty. The haughty princess -- another Hero of Light -- has been kidnapped by a witch, so it's off to rescue her, leading you to soon meet up with the princess' insecure attendant and another firebrand boy from Horne. After rescuing the princess, a magic crystal tells the group they are destined heroes and gifts them with a crown. The crowns, earned at pivotal story moments, act as the game's job system. With all four heroes in action, you get a full picture of the brilliantly simple battle system: Turns are dictated by level while attacks, dictated by AP, are automatically directed at the strongest opponent.

The core play in 4 Heroes is ingenious but is ruined by bad design choices. Immediately after leaving the first dungeon the group is separated, and the game's first fifteen to twenty hours are then spent with a party of only two or three characters with constant shifts in story perspective. The structure would work if it weren't for the near-random nature of when you are suddenly jumped to another continent and a different character. Each succeeding event, the attendant characters, and the inevitable dungeon (complete with boss) typically requires you to use the most recently unlocked job classes, negating any real strategic decision making.

The bosses in the first half of the game are intensely difficult as well, requiring you to use specific elemental equipment and spells to defend and attack to succeed at all. Each character can only carry fifteen items including their equipment and spells, so if you reach the end of a dungeon with the wrong gear (and there's typically no way of knowing what you need until you reach the boss) you have to either warp out using a dragon's wing or walk out. It's a frustrating and illogical design choice, almost negating the charm of the game's desert, ocean, forest, and snowy towns. The second half of the game sees all four heroes in your party and over half of the job crowns available. You have also collected enough gems (your currency and equipment/job leveling resource) to begin unlocking the most useful skills/gear. Rather than becoming a deeper game at this point, 4 Heroes of Light becomes so easy as to be banal. The third-tier skills for each crown (the maximum) are over-powered to the point of killing bosses in two or three uses. The end of the game, though, throws you into a long, brutal dungeon filled with multiple bosses and without access to your skills most of the time -- an end-game gauntlet true to 8-bit design, but one that makes no sense given the pace of the rest of the game.

4 Heroes has other problems. The story and dialogue aren't deep -- the play and art are the stars of the show -- but what little there is comes off as morally confused. For instance, you're tasked with saving a plague-ridden city late in the game. The town, a would-be Babel with a tower built to the sky, is convinced that they've brought the plague on themselves by offending their goddess. When you reveal the source of evil to be a demonic pharmacist and cure the town, they then insist it was because they weren't faithful enough to their deity. So the message there is that blind faith is both the cause of and answer to all problems?

Despite its many issues, it's impossible to deny 4 Heroes' artistic charms. The FF Tactics by way of Charles Schulz character design and the Mitsuto Suzuki orchestrated soundtrack are both wonderful and make expert use of the aging hardware. The game also has a wealth of content, with four insanely challenging optional dungeons that unlock the game's final eight job classes and a multiplayer mode that earns you new gear by adventuring with a friend. Still, artistic merits and admirable design ethos don't save an inherently flawed game.