A flashy and comprehensive keyboard that's well suited to gaming 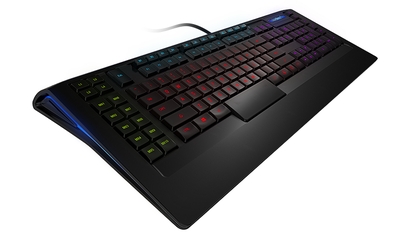 The SteelSeries Apex does a good job of securing its place as a premium, membrane-based keyboard. While the design and illumination is compelling, it may be tempting to pay a bit more to get a mechanical keyboard instead.

A hardcore gamer knows that mechanical switch-based keyboards are the way to go when it comes to PC gaming, but they are often too expensive and too noisy for more casual gamers. Membrane-based keyboards such as the SteeelSeries Apex are a good alternative thanks to their quieter operation and slightly more affordable pricing.

The SteelSeries Apex is a mid-to-high-end keyboard that's priced only a little better than a mechanical keyboard. However, it offers a few features that can't be found on too many keyboards in the same price range.

It's reasonably large keyboard, and this is mainly due to the fact that the wrist rest comes integrated. It is not an oversized wrist rest that can be found on some other keyboards, but the fact that it's permanently attached means that users do not have the option to remove it or use their own third-party wrist rests. The exterior is rugged and comes in black with white accents, with normal sized keys packed relatively close to each other.

There are two rows of programmable keys at the top of the keyboard, and the Apex also comes with an oversized space bar, and a pair of diagonal arrows to accompany the existing directional arrow keys. It's up to the user to find creative ways to use the diagonal keys, but the larger space bar is a welcome addition and easy to adjust to.

Customisation is the theme of the Apex, to the point where it comes with four layers of programmable keys, effectively allowing for over 500 macros to be assigned. A handy addition is that one row of macros keys is raised higher than the other along the top of the keyboard, which makes it easy to track down the required keys without looking away from the screen.

The Apex comes with colour LEDs capable of 16.8 million colours split into five independent colour zones. The ability to allocate individual colours to each zone really helps to make the Apex stand out against competing keyboards, which tend to only allow a single colour to be assigned uniformly to all keys. Physical customisation comes in the form of swappable rubber feet, allowing the user to adjust the angle of the keyboard in lieu of foldable plastic flaps found on most keyboards.

Premium experience at a cost

We put the Apex to the test using recent titles such as FarCry 3: Blood Dragon, and Company of Heroes 2. The keys worked well during gameplay and there were no issues in commands being recognised. The two raised bumps on the W key were appreciated, as it made it easy to return to the WASD zone on the keyboard purely by feel after activating macros.

Despite the larger size of the space bar, it responded well during gameplay and did not feel clunky to use. The feel of the keys is obviously different from a mechanical keyboard, but the Apex's membrane still did a good job to ensure an adequate amount of resistance when playing games or simply typing.

One thing that became apparent during our testing is that the Apex is sturdy, but not quite as rugged as other keyboards on the market, particularly some of the premium mechanical keyboard offerings that are typically aimed at pro gaming. While it feels solid and will hold up fine for most gaming needs, it doesn't feel quite as indestructible as some more high-end gaming keyboards.

The Apex does a lot of things right, particularly when it comes to customisation, but it's still a membrane-based keyboard, and the user will ultimately have to decide if the premium price tag is warranted compared to other membrane-based keyboards. The macros keys and customisable illumination are hard to overlook, but it's possible to pay a bit more to get a decent mechanical keyboard.