An already solid headset gets a premium version 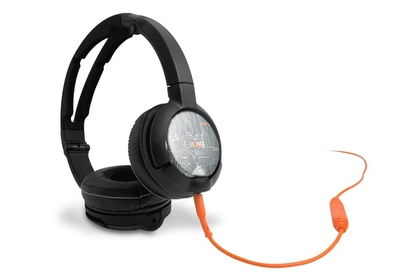 If you're looking for a solid headset for gaming, the Luxury Edition of the SteelSeries Flux is a good investment. It could use some refinement though, especially when it comes to padding under the headband.

Danish peripheral manufacturer, SteelSeries, has several lines of gaming-focused headphones, and the Flux line is at the upper end of the scale. The regular Flux headset comes with different colour options, but if you want a more premium look you can go for the Luxury Edition that we’re reviewing here.

This headset ditches the multiple colours for a uniform black design with silver side plates and an orange cable. There is an extra set of black side plates for those of you who want a more consistent look. The ear cushions are also upgraded from regular pads to pleather cushions, while a dedicated carrying case is included for storing the headset.

While the Luxury Edition comes upgraded with a fancier exterior, it features the same innards as the regular Flux. The earpiece comes with a frequency response of 18 to 28000Hz and an impedance of 29 Ohm, while the microphone has a frequency response of 50 to 16000Hz and sensitivity of -38dB. The basic construction of the headset is also identical; it comes with the same wide frame designed to sit on both the head and neck for long periods of time.

Connectivity is provided in two ways, either with a cable that has the microphone and audio split into separate 3.5mm jacks, or the cable that has both integrated onto the one jack. The first cable is typically used with PCs while the second one is used with smartphones or portable music players.

The earpieces can be rotated for either easy storage or to make them more comfortable to wear while hanging off the neck. The headband is adjustable, though there are no visual notches to keep track of the adjustments. Padding under the headband consists of several strips of soft rubber, which means that the weight of the headphones can be felt while you use them. SteelSeries likely did this for durability reasons, though the Luxury Edition could have been an opportunity to add the same pleather padding used for the earpieces, particularly considering how comfortable the earpiece cushions are. Wearing the Flux never got uncomfortable during our testing, but those of you who have used headsets with padding on the headband may notice the difference.

The Flux headset comes with a collapsible design that enables it to be folded neatly into the included pouch. The ability to fold the headset makes it handy for those of you who want to take them on the road, though the accompanying pouch may not be that well suited for the task. The pouch is made from a soft cloth that looks and feels nice to touch, though it provides only minimal protection from bumps and falls. This will not be an issue if you never take them out of the house. Those of you who plan to take the headset outside may want to invest in a more robust storage solution. For example, the Beats by Dre range of collapsible headphones come with padded pouches that address the transportation challenge, and it would have been nice to see the Luxury Edition come with a similar style of pouch.

We tested the Flux headset while playing FarCry 3: Blood Dragon, and StarCraft II: Heart of the Swarm. The earpieces did a good job of replicating the loud action and explosions, and the ambient noise and music also sounded crisp. Aided by the earpiece cushions, outside noise was blocked quite well and did not affect the overall listening experience during gameplay.

Although not specifically designed for non-game tasks, we also put the Flux to the test with music and movies on a smartphone. The audio in both cases was faithfully replicated with no audible noise or distortion. As such, we think that the Flux can be put to good use both in games and with other forms of portable entertainment.