A familiar mouse experience with a professional gaming focus 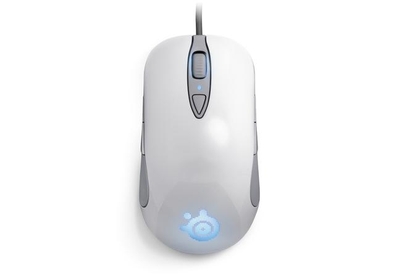 SteelSeries Sensei [RAW] is a simple looking yet highly practical mouse well suited for gaming and non-gaming use. However, gamers that want more bells and whistles in a mouse will likely look elsewhere.

Danish peripheral manufacturer, SteelSeries, has made name for itself by creating PC accessories aimed at the professional gaming circuit. The company’s latest concoction is the Sensei [RAW] gaming mouse, which comes in a frost blue edition. From a technical perspective, the mouse is capable of 10.8-megapixel HD image correlation at up to 12,000 frames per second, with movement tracking of up to 150 inches per second. This hardware capability is encased in a glossy white exterior and bright blue LED.

Left-handed gamers have a tendency to miss out on gaming mice, as they often feature an asymmetrical design that fits in the hands of right-handed users. The Sensei [RAW] is a symmetrical mouse, which means both left- and right-handed users can make use of the design. At first glance, the mouse seems to have a lot in common with Microsoft’s IntelliMouse. As a former, long time user of the IntelliMouse, this made using the Sensei [RAW] a very familiar and comfortable experience. Special mention should be made of the clear, stylish packaging of the mouse, which allows retail customers to inspect the mouse up close before deciding to buy it or not.

The front of the mouse has two clickable buttons and a scroll wheel. There is also a DPI toggle switch and a LED indicator just above the scroll wheel. Either side of the mouse is fitted with two programmable buttons that are aligned symmetrically. The main exterior of the Sensei [RAW] is a smooth and glossy white plastic, which encapsulates the two main buttons, while the sides are covered in a grey, lightly textured plastic that is also used for the remaining programmable buttons. Sweat has a tendency to make the smooth white plastic a bit slippery for the two main buttons, though the textured grey sides ensure that the mouse remains gripped during use.

The actual mouse is quite lightweight, and when combined with the three slipmats underneath, it ensures that the Sensei [RAW] glides smoothly on most surfaces. Physically, the mouse does not allow for any customisation like competing upper-middle to high-range products do, though software customisation is done through the downloadable SteelSeries Engine software.

The mouse has three lighting zones, spanning the indicator under the DPI switch, the scroll wheel and the rear logo. The blue LED is bright and visible even when gripping the mouse, with pulse speed and illumination customisable through the software. Competing high-end mice are fitted with multicoloured LEDs, so users looking for this added variety should be aware that the Sensei [RAW] LED is single coloured.

In addition to customisation options, the Steelseries Engine software comes with analysis tools that tracks which buttons are pressed in which profiles. The user can then use this information to map their controls in a more effective manner. By taking the time to do this, the user is able to use the switch under the scroll wheel to move between sensitivity settings on the fly. The four buttons on the side of the mouse can be used to assign macros via the software, though in reality this function gets overlooked unless users retains themselves to make use of the buttons. Traditionally, macros work well with keyboards as they are stationary. During gameplay, however, there was a tendency to accidentally press the side buttons on the Sensei [RAW] due to the placement.

Put to the test

The simple, symmetric design of the Sensei [RAW] means that it works well both for gaming and for regular application use. Again, this is likely due to its similarity to the IntelliMouse, which was a mainstay on many desktops for a long time. RTS games are demanding of mouse capabilities, such as their accuracy and responsiveness, so the Sensei [RAW] was tested with StarCraft II: Heart of the Swarm. The mouse movement when navigating the battlefield was smooth, and selecting units to carry out commands was effortless via the primary buttons. Far Cry 3: Blood Dragon was used to test the mouse in an FPS environment, and the switchable settings on the mouse made a difference during various combat situations. I was able to use regular settings during fire fights, and could switch easily to sniper shots and more accurate settings by simply pressing a button.

All up, this is a simple mouse that performs well and is suitable for left- or right-handed users.