The Sun Storage 7210 packs as much as 44TB of surprisingly fast and affordable storage in a single 4U chassis. 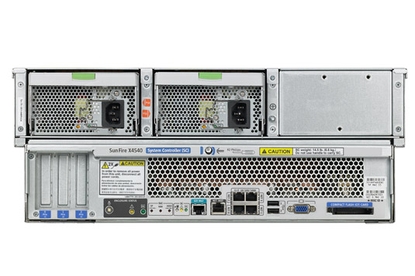 A thoroughly heavyweight filer in a small form factor, the 7210 packs as much as 44TB of surprisingly fast and affordable storage in a single 4U chassis. The web-based GUI is fantastic, and performance is stellar. It's just about everything you could want in a storage server.

As a closed appliance, the 7210 doesn't offer much outside-the-box potential, but it delivers plenty of inside-the-box performance. When originally setting up the system, I configured a storage pool (a zpool) and an NFS share via the GUI, then tested it from my Linux workstation, using the single-gigabit NIC on that box. Much to my surprise, using dd to create a 10GB file on the NFSv3 share ran at nearly wire-rate, achieving a 115MB/s sequential write time. I then tested with NFSv4 and got the same results. Using Iometer and a Windows Vista system, I was able to get about 90MB/s sequential writes, which is quite good.

Configuring iSCSI is simple: Create an iSCSI share, link an initiator, and off you go. I did have a few issues with LUN (logical unit number) discovery at one point, but clearing the LUN configuration and starting over remedied the situation. As with the NFS performance, I was able to achieve nearly wire-rate throughput with sequential reads and writes via iSCSI and a software initiator running on a CentOS 5.2 system. Using an iSCSI hardware initiator will decrease the CPU load on the client system, but will probably achieve similar performance figures.

In addition to the single-protocol tests, I ran a bevy of multiprotocol tests. Running sequential reads and writes via NFSv3, NFSv4, iSCSI, and CIFS from four separate client systems to the 7210 with a 2GB aggregate link resulted in all four protocols running around 55MB/s to 60MB/s during load. Again, this is very close to wire-rate speeds. During these tests, the aforementioned protocol and system component health indicators were heading toward a dark and stormy night. However, the FishWorks interface didn't falter, even when the system was running as hard as it could. Throughout the most intense parts of these tests, I didn't get the feeling that I'd lost communication with the 7210 or that it was fragile in any way.

The Sun Storage 7210 Unified Storage System isn't cheap, but the cost is actually fairly low considering the capabilities. Make no mistake, none of this capability would be possible without ZFS; no other file system available today can make use of the resources present in the 7210 like ZFS, and the addition of the solid-state logging drive just increases the potency of this file system.

The market for multilingual filers has plenty of players, from NetApp to Adaptec, but in terms of bang for the buck, Sun's 7210 is in rare territory. Regardless of price, son of Thumper is a uniquely complete representation of what a filer should be.