This peephole camera from Swann is a nice idea, but it doesn't work very well 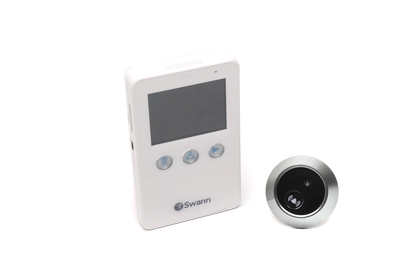 This camera from Swann can be installed in a door's peephole and take pictures of people who ring your bell. It's a nice idea, but it's a cheap product and this is noticeable in its image quality and overall usability, both of which are not good.

There are a few different ways you can turn the peephole in your door into a camera, but most involve a fair bit of know-how, both in the parts that need to be sourced and in the way they need to be installed and connected. Swann's DoorEye Camera solution is basically an all-in-one unit that runs on battery power and requires minimal D-I-Y knowledge for installation. The problem is that it isn't very good.

It's a very basic unit that feels cheaply made (it is $119 after all) and it has a 0.3-megapixel camera and a 2.8in LCD screen that don't supply good quality image images. There are two basic parts to this unit: the peephole camera and doorbell unit, and the main unit, which holds the LCD screen, 8MB of internal memory, a rechargeable battery and a speaker.

To secure the unit to a door, you need to either already have a peephole installed that you want to replace, or you'll have to drill a hole that's 12mm in diameter for the camera's brass screw and the mounting pole to pass through. This pole is long enough to fit a standard thickness door (35mm). The pole is threaded and is used to hold the camera to the main unit via the main unit's mounting plate. The screen part of the main unit then plugs in to the mounting plate via the circuit board board and can be screwed in place.

Once all the parts are in place, the Swann DoorEye Camera looks like a very neat solution, but getting to that point requires some fiddling. A flat cable runs from the camera through the mounting pole and you'll need to be mindful of it so that you don't twist it and rip it as you screw the mounting pole in place. You'll need to do this while holding the backing plate in place in its correct position. The camera part will stay in place in the peephole if you have lined it up properly and used the supplied double-sided tape to stick it to the door.

It doesn't take too long to install at all, especially if you already have an easily removable peephole and don't need to drill any holes — screwing in the mounting pole is the most time consuming part. The thing is, it really isn't worth the effort. Its camera and LCD screen are of a low quality, it has a narrow field of view (60 degrees), it has an annoying ring tone (which could be hard to hear unless you are close to the door anyway), and the unit has poor usability thanks to slow performance and cheap plastic buttons.

When the doorbell button is pressed, the camera activates to take a picture of the person who pressed it and also to show a live picture of the person outside your door. If you are not standing directly behind the door when the bell rings, then you won't be able to see who is there unless you press the button that has an icon of a person on it, which enables the LCD screen and shows a live view of who is outside. This isn't ideal. Furthermore, the angle of the camera is barely wide enough to capture a person's face in full at the height of a standard peephole, and it will do a horrible job if there is any backlighting, not enough lighting, or if the person is moving.

It also didn't always work properly, especially when an SD card was installed in its memory slot. Sometimes we'd press the doorbell and instead of taking a picture it just activated the screen. Sometimes the bell was cut off in the middle of a ring the screen only flashed on for a second. It was very inconsistent.

This unit is meant to be most useful for when you're not home, as it can store an image of anyone who presses your doorbell while you are out. The use of a battery rather than mains power is convenient, to a point. You'll have to dismantle the main unit, disconnect it from its mounting plate and take it to a computer to charge it via USB when it runs out of juice. You'll probably want to do this at night when there is less likelihood of anyone knocking on your door (and because it can take up to four hours), but that will depend on when the LCD screen displays a message saying the battery is running low.

Swann describes this unit as a "protection system" (it even ships with eight security stickers claiming 24hr surveillance), but it feels more like a toy instead (and you'll have fun deciding where to put the stickers). The camera and LCD screen are poor quality and there aren't any settings so that you can tailor the unit to your needs (you can't change ring tones, volume or picture quality, for example). It's a nice idea though and would be worth considering if it was a better quality product. It might only work well for a small apartment that has a consistently lit hallway.