The first turn-by-turn GPS navigation app for the iPhone 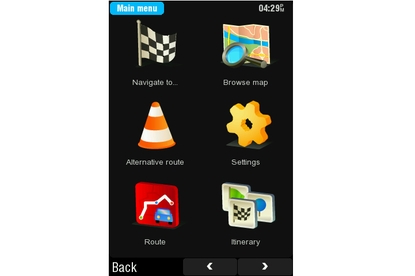 Sygic's Mobile Maps 2009 iPhone app is far from perfect, but it’s a great start. Lane guidance, signpost display and speed limit notifications are all included. There are plenty of bugs that need to be ironed out, but with software updates this app will get better.

The first turn-by-turn GPS navigation app for the iPhone is finally here. Whereis provides the Australian maps for Sygic Mobile Maps 2009, and despite plenty of bugs that need to be ironed out this app is a good first effort.

Sygic Mobile Maps 2009 is based on other Sygic Mobile applications, including versions that run on Windows Mobile and Symbian-based smartphones. As such, it has a similar interface. You are unable to swipe screens left or right like you can with many other iPhone apps, but the basic tapping method still works effectively. The app is simple to use. Menus are clearly labelled, options are straightforward and, most importantly, the app is fast. We were lucky enough to test Mobile Maps 2009 on an iPhone 3GS (hence benefiting from the upgraded processor), but the app is also compatible with the iPhone 3G. It runs very smoothly and did not pause or freeze at any stage during our tests.

Searching for an address is a simple matter of hitting the "Navigate to..." button and selecting an address. Mobile Maps 2009 filters street names by suburb, which helps narrow down search results. You can hide and show the keyboard on any of the "Navigate to ..." screens. Although it's easy to input data, we would have preferred the use of Apple's regular iPhone keyboard layout rather than the slightly smaller Sygic version. In addition to navigating to an address, Sygic Mobile Maps 2009 can navigate to favourite destinations, a postcode in Australia or New Zealand, Points of Interest (POIs), a point on the map or a specific GPS coordinate, and you can also select from previous routes. One feature missing is the ability to navigate to an address in your iPhone's contact list.

The navigational experience is positive on the whole, with clear maps and good detail. With a clear view of the sky, it took less than 10 seconds to get a GPS fix in most instances. We were less impressed with the accuracy: it's not a huge issue, but often the arrow denoting your current position on the map is slightly behind your real position, suggesting that the iPhone's GPS chip isn't as accurate as those used in dedicated in-car GPS units. The Mobile Maps 2009 app recalculates a route if you head off course, but it does so without any warning.

The map screen is clear and concise, particularly in the landscape view. Four boxes at the bottom of the screen can display a variety of information (customisable in the settings menu) including remaining time to destination, time of arrival, current speed, GPS signal indicator, length of route, distance to destination and current time. A nice touch is the trip progress indicator, a blue line that moves across the bottom of the map as you navigate your route. At a quick glance, it allows you to see how much progress you've made.

Unfortunately, the Mobile Maps 2009 app lacks text-to-speech technology, so it won't read out street names. It also displays incorrect names for some motorways and freeways, such as the S7 and S8. Another issue is that you can only adjust the volume while the voice is making an announcement (pressing the iPhone's volume buttons at any other time simply adjusts the volume of the phone's ringtone). We felt the volume of voice instructions could have been louder, even at the highest level.

The lack of text-to-speech is perplexing considering the app boasts some features that are more advanced, including lane guidance, signpost display and speed limit notifications. Lane guidance is a little small and can be hard to see, but it works very effectively. We found it worked on a wider range of roads than many dedicated GPS devices. The signpost display shows a static image of upcoming road signs, with a cross on all directions except the one you need to take on your route. Speed limit notifications are also very handy and aren't just restricted to main roads.

Sygic originally advertised speed, red-light and school zone warnings as features of the Mobile Maps 2009 app, but they aren't included. They are no longer listed in the App Store description. Sygic has announced that safety warnings will be included in an update scheduled for release in the coming weeks.

Other features of the app include pedestrian and bicycle route planning, multi-stop trips, customisable POIs, a next turn preview and the ability to specify areas you want to avoid. You can display any route as images, text instructions or a summary format. An annoyance is the fact that if you are playing iPod music while using the app, the music cancels when voice prompts are played and doesn't resume. Similarly, when you receive a phone call the app closes and doesn't automatically resume when you end the call.

Sygic has announced that an update will add speed and red light camera warnings and extra POIs. The free update will be available shortly and will also increase the volume of voice instructions, fix the music playback issue, improve GPS signal information and add low battery status information. We'll update this review as soon as we get our hands on the new version.

For more information about the iPhone, visit our dedicated iPhone Centre.