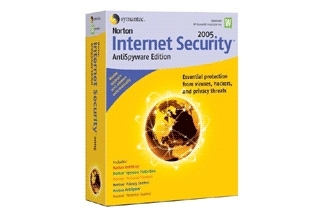 Symantec's latest security suite now includes a new anti-spyware element. Having tried this while it was in its beta form, we weren't hugely impressed, finding that it failed to block many common spyware applications (like Hotbar, Xupiter, and Total Velocity). It also tended to recommend full Internet access when the firewall picked up various outgoing DNS requests, which was also cause for concern.

Fortunately, we can report that most - though not all - of these early issues have been resolved, and a concerted attempt to corrupt our test system was largely unsuccessful. That said, it still automatically gives products like MSN Messenger full access without asking permission, and user-installed software like the MyWebSearch toolbar is still ignored - though whether MyWebSearch qualifies as spyware is a margin call.

As always, Norton Internet Security's front end is very logical and easy to use, and it's still one of the most comprehensive security suites, but one of the difficulties facing any anti-spyware/antivirus tool is striking a balance between security and transparency. One of this suite's strengths is that most of it requires no manual configuration; another is its ability to thoroughly remove spyware once it has been detected.

With this much-improved late addition, Norton NIS 2005 AntiSpyware Edition has regained its position as one of the leading security suites. However, more advanced users may prefer security tools that ask more questions. It's worth pointing out that free anti-spyware solutions are also available.