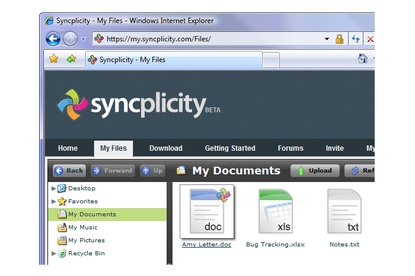 With its breadth of features, ease of use, and added bonuses such as version control, Syncplicity is our current top pick among file-syncing services.

As its name implies, Syncplicity is a file-synching service that requires very little maintenance, or even any interaction, once you've set the program to do what you want.

The installer prompts you to synchronise the usual suspects (Documents, Pictures, Desktop, and so forth), but you can specify any files you want. When you do, it copies them to Syncplicity's servers.

When you install Syncplicity on a second computer or add new folders to the server, it will offer to sync (download) the files already on the server to the second machine. If you agree, you can tell it where to put the folder.

If a folder by the same name already exists in your specified location, Syncplicity asks whether you wish to merge the two. If you don't, you can enter a different location. Sending sharing invitations to multiple colleagues can be time-consuming: for each recipient, you have to click 'Add Someone' and then type in their e-mail address; you can't enter multiple addresses.

Similar to Dropbox and SugarSync, Syncplicity lacks a remote-access feature; but given Windows' built-in networking and Remote Desktop tools, we don't see that as a serious omission.

Along with Dropbox, Syncplicity is the only product among the sync apps we've tested with an explicit versioning feature that preserves different editions of your files as they are synched, added, and removed. You can access an older version of a file by right-clicking the file and examining a list of the versions Syncplicity has tracked since the original upload. The list includes buttons for downloading a version to your local computer or reverting to that version.

Syncplicity bills itself as a backup service, but its interface doesn't include any special backup commands: the online copy of your synced folders is your backup. Syncplicity's claim is perfectly fair, since it stores on its servers not only copies of past versions but also copies of deleted items. Syncplicity's free service will delete older document versions after 30 days, however.

Syncplicity's free account caps out at 10,000 files, 2GB of storage, and two PCs, with limits on numbers of file versions and how long they'll be kept. A basic paid ($US10-per-month) account re­moves all limits except storage capacity, which tops out at 40GB with an op­tion to purchase additional 50GB blocks at a cost of another $US10 a month each.