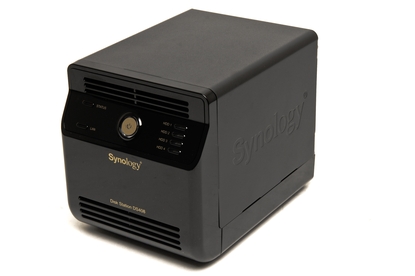 Although the DS408 certainly has good software and strong multimedia capabilities, it is ultimately let down by a poor case design that restricts the ability to hot-swap hard drives. This will suffice for home use, but is inadequate for situations where data integrity is a must.

Synology’s DS408 is an easy to use network-attached storage (NAS) device. While its basic functionality and software are strengths of the device, poor design and the inability to properly hot-swap drives make it unsuitable for heavy use.

The DS408 is a four-bay NAS device capable of housing up to 4TB of storage in a range of disk configurations, including basic, JBOD, and RAID 0, 1 and 5. Running off Gigabit Ethernet, the DS408 manages to fit two USB 2.0 ports to attach a shared printer, external hard drive or USB-capable uninterruptible power supply. Unfortunately, there is no button on the device itself to facilitate a quick backup of an external disk or USB stick.

The DS408 doesn’t open from the front like many NAS devices. Instead access is through the device’s back panel, requiring the user to remove four thumb screws and detach the back cover as well as the top and sides. The DS408 doesn’t have fixed SATA ports — there are separate cables provided, but they must be attached to the device’s motherboard by the users themselves. The DS408 also doesn’t utilise hard drive trays to facilitate easy ejection. Drives are instead supporting by a cage resembling those found in cheaper PC cases; thankfully, they can be screwed in for some extra security.

To add to the mess created by non-fixed cables, the hard drive power cables that accompany the device aren’t positioned the right way. Since SATA power and data cables can only be attached in one way, the power cables in this instance must actually be positioned upside down in order to fit. As the cables are quite short, doing this inevitably increased tension on the cable and decreased the manoeuvrability of the disk itself. These odd design choices culminate in a setup inferior to competitive NAS devices such as QNAP’s TS-409 Pro. This probably won’t faze those who intend to set up the NAS once and leave it alone, but users intent on regular hot-swapping or worried about disk failures won’t see too much to like about the DS408.

Thankfully, there are some upsides to the device. Server set up and configuration is semi-automated, thanks to bundled software for both PCs and Macs. Server administration is also extremely easy using the device’s embedded Web server. Synology has clearly focused on the software side of things with the DS408, resulting in one of the most user-friendly interfaces we’ve seen in a NAS device. Advanced tasks like configuring RAID tasks and administering FTP servers are almost as easy as creating a photo station or backing up data through the Web server. Given the interface’s resemblance to Windows Explorer it’s unlikely that many novices will be confused when attempting to configure the DS408.

Hard drive management is fairly easy, though a little odd. Although initial set up involved formatting the hard drive, when it came to mapping a drive we discovered that we had to format the drive again through the Web server. Nevertheless, hard drive formatting is fairly quick, with the DS408 managing to perform a basic format on a 1TB disk in under 2min. Drive management may not offer enough options for advanced users, but it should suffice for home and small office use.

The DS408 can host a HTTP or FTP remote server as well as a dedicated photo station for sharing photos across the Web. The device is also able to host iTunes and UPnP servers for network media streaming, while an integrated download station allows users to schedule HTTP, FTP and BitTorrent downloads. The DS408 also allows users to configure BitTorrent settings, changing upload and download speeds as well as changing BitTorrent protocol encryption. Perhaps the most unusual feature of the DS408, however, is the Surveillance Station, which allows users to record video from IP cameras attached to the same network — essentially transforming the DS408 into a four-terabyte surveillance digital video recorder.