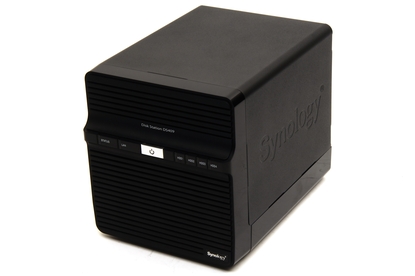 We weren't thrilled by the design of Synology's Disk Station DS409 NAS device and it doesn't write data particularly quickly. However, the combination of quick read speeds and powerful media browsers make this a viable option for storing and serving audio, photos and video.

Synology's Disk Station DS409 is a competent network-attached storage (NAS) device with four disk bays (you'll have to provide that hard drives yourself). It has a total potential storage capacity of 8TB.

We aren't sure which is uglier — the Synology Disk Station DS409 or Seagate's BlackArmor NAS 440 — but Synology's NAS device is certainly less practical. The DS409 has four drive bays, but they aren't hot-swappable. They can be accessed by unscrewing the back panel and lifting up the entire middle casing. Space inside the case is cramped, making it difficult to extract the bottom drive caddy without disconnecting power and network cables and lifting up the NAS device.

The back panel sports single eSATA and Gigabit Ethernet ports, and two USB ports. The USB ports support external hard drives (formatted with FAT32, ext3 or NTFS file systems) as well as uninterruptible power supplies (UPS), printers, and even speakers and iPods. The NAS device lacks a one-touch copy button, which would let you easily back up a USB hard drive.

For our tests, we installed two 1.5TB Seagate Barracuda 7200.11 hard drives in a RAID 0 array. The Disk Station DS409 consumed 30.7 Watts when idle and had a peak power consumption of 34W when simultaneously reading and writing data, which is similar to the power consumption of the QNAP TS-239 Pro Turbo NAS when using the same hard drives. The Disk Station DS409 can be configured to hibernate after a set time (the default is after 20 minutes of inactivity), which allows it to reduce power consupmtion to as little as 14.2W by putting the hard drives to sleep. You can also choose different cooling modes to suit both 2.5in and 3.5in hard drives.

Like the QNAP TS-239 Pro Turbo NAS device, the Disk Station DS409 features an icon-heavy Web interface that provides step-by-step wizards to guide you through both basic and advanced configuration. You can configure sharing protocols and an FTP server, as well as individual user permissions and data quotas. Supported RAID configurations include levels 0, 1, 5, 5 + Spare, 6 as well as JBOD (which combines storage capacity) and Basic (separate volumes for each hard drive) configurations. Data on the NAS device can be backed up to an external hard drive, as well as a Synology or rsync-compatible server.

For photos, videos and music, Synology offers an iTunes server and UPnP media streaming. Though the Disk Station DS409 lacks a powerful third-party media interface like TwonkyMedia, its audio and photo media browsers are quite powerful. The Audio Station, for example, allows you to play music stored on the NAS device or from a connected iPod and it can output audio to USB-connected speakers. The Audio Station won't recognise an iPhone or iPod Touch in the media browser, but you can stream music already on the NAS device to either of these devices using Synology's DS audio and DS photo iPhone apps.

In Intel's NAS Performance Toolkit, the NAS device streamed 720p video footage at a rate of 53.2 megabytes per second (MBps), and recorded the same footage at 69.7MBps. The Disk Station DS409 is slightly slower than the ProWare DN-500A-CM but significantly faster than Promise's SmartStor NS4600.

Unfortunately, the results in our real world file transfer test results (transferring data between the NAS device and a 300GB Western Digital Velociraptor) weren't as good. When transferring 20GB of 3-4GB files, the Disk Station DS409 NAS device had a write speed of 36.6MBps, a read speed of 55.3MBps and performed a simultaneous read/write operation at 21.1MBps. These speeds are more on par with the Promise NAS device, which also had poor write speeds in this test.

In our small file test we transferred 3GB worth of 1MB files. The Disk Station DS409 NAS device wrote data at 6.9MBps, read it at a rate of 36.6MBps and performed a simultaneous read/write transfer test at a rate of 5.2MBps. We expected the results in this test to be slower than the results in the large file test, but write speeds in both tests show that the NAS device isn't the best for constantly transferring large amounts of data. Thankfully, its read speeds make the Disk Station DS409 NAS device a good candidate for a media streamer.