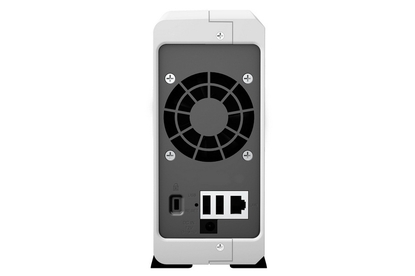 The Synology DiskStation DS112 is a one-bay NAS device, plus so much more.

Before entering the Synology Showcase competition, I went to the company's Web site to do a bit of research on the DSM 4 software. It looked like it was a lot more than just a NAS. I wondered if all of the features listed were available only on the higher end units. It turns out they are available on the single drive SOHO/consumer units like the DS112.

I run an IT services business from a home office that supports primarily small, local businesses with fewer than 10 computers and a number of home users. So I would fit the target demographic exactly for this type of NAS device. The DS112 also has two USB 3.0 ports and one eSATA port on the rear, which can be used to connect external hard drives and USB printers.

Unpacking and setting up the DS112 was quick and simple. I popped the Installation CD into my laptop and loaded the Quick Installation Guide. The guide takes you through opening the unit and installing the hard disk. The unit will take up to a 4TB drive. You then just plug in the supplied Gigabit Ethernet cable to your router and turn on the unit.

Now you start the Synology Assistant to format the drive, load the Disk Station Manager (DSM) software from the supplied CD, and set the administrator user password. Access to the DS112 is via a browser. The layout follows the usual desktop style with icons on the left and a task bar across the top. I installed the Media Server and Windows (CIFS) so I could test.

Accessing files from theDS112 provided about the same performance as accessing the files on a Windows file share. What did surprise me was that when I tried accessing the DS112 from 4 devices simultaneously, it provided noticeably better throughput than the Windows system that I used for comparison. Coupled with DHCP services, LDAP services and mail server, this system could be used to easily replace a basic file server in a small office.

To test DLNA, I tried streaming a 1080p movie to one PC. I had no problems. I then tried two PCs and two Sony Blu-ray players, which were all connect by Gigabit Ethernet. The movie played without stuttering and the audio remained in sync. My wireless network is only 802.11g, so streaming HD video to one wireless devices was excellent. I did not expect too much more, however I was able to stream SD video to seven wireless devices, three phones, two iPads, and two laptops at the same time without any problems at all. I did a quick test of the iTunes servers and performance was very similar. I was extremely impressed with the performance under load.

In Conclusion the DS112 is basically NAS plus a whole lot more. The wide array of installable (and free) services that are available means it could replace a basic file/print server at a fraction of the cost of even a basic Windows system. My only issue is that the setup and configuration could appear to be overly complex for users with little knowledge of networking. This could be remedied with a simplified setup that automates setting up file and media sharing, which would be the most common home uses.

Note: we recently conducted a Synology competition in which users had to tell us how winning a Synology NAS device would increase their office productivity. The winners of these NAS devices (including the author of this user review) kindly agreed to review these devices to further illustrate how they will be using them for their day-to-day work.