Synology's two-bay NAS device is a fast performer, though you'll pay a premium compared to other two-bay NAS devices. It lacks some SMB-focussed features, but home users will find the audio and photo browsers very useful.

Synology's DiskStation DS209+II network-attached storage (NAS) device provides up to 4TB of storage over two hard drives. The lack of hot-swapping and volume encryption features are disappointing, but fast file transfers and easy-to-use media streaming make this an appealing option for the home. 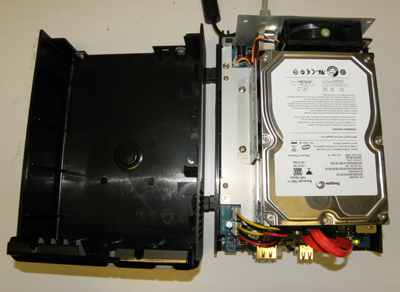 The Synology DiskStation DS209+II NAS device has a strikingly similar enclosure to QNAP's TS-210 Turbo NAS, though it has a standard matte black finish instead of the TS-210's glossy white. The casing can fit two 2.5in or 3.5in hard drives at a time, but there are no drive bays as such. Instead, installing hard drives is a matter of pulling the casing into two pieces and screwing the drives into a cage. Synology bundles SATA data and power cables which connect to the NAS device's motherboard, but these are quite short and working out the best way to connect the drives can be a little troublesome. Hard drives can be formatted in a JBOD configuration, as well as in RAID 0 or RAID 1 arrays.

Connectivity is standard fare on the Synology DiskStation DS209+II; you get two USB 2.0 ports which can be used to connect external hard drives, printers and UPS devices. There's only one Gigabit Ethernet port, so no failover/load balancing setup is possible. Predictably, there is a USB port and one-touch copy button on the front, allowing you to easily back up to the NAS device from external hard drives. However, Synology has added in a little something extra, with a front-mounted external SATA (eSATA) port; this can provide very fast file transfer speeds for the few hard drives that offer the connection.

Inside, the DiskStation DS209+II NAS device is powered by a 1.06GHz CPU with 512MB of DDR2 memory, a slight step up from the components in the TS-210 Turbo NAS. The NAS device consumes between 33.5 and 37 Watts of power during use, though a hard drive hibernation feature effectively halves power consumption after a set amount of time.

The DiskStation DS209+II's performance surpasses most other two-bay NAS devices we have tested, particularly when streaming media or writing large files. It does fall behind the likes of business-targeted devices like the QNAP TS-239 Pro Turbo when reading data, but considering the price difference you're certainly getting better bang for your buck here.

Synology bundles its DiskStation Manager AJAX-based Web interface with this NAS device, which makes it extremely easy for even the tech novices to create a basic setup. There are numerous wizards to help setup and configure everything from shared folders and users to backup schedules. From here you can enable and access media browsers for audio, photos, as well as separate managers for HTTP/BitTorrent downloads and viewing up to 12 IP-connected cameras simultaneously.

The NAS device supports Windows (SMB), Apple (AFP) and Linux (NFS) network protocols, as well as FTP and HTTP/HTTPS server capabilities. You'll be able to stream media to DLNA-certified UPnP players, iTunes clients or use the included the Web-based audio and photo browsers. The audio browser is particularly impressive as it can play music from the NAS, connected iPods and Internet radio stations. It can even output audio directly from the NAS device through USB-connected speakers. Unfortunately, it won't play media from the iPhone or iPod Touch, but users aren't completely left in the lurch; Synology's DS audio and DS photo iPhone apps provide access to the browsers.

Data can be backed up to external hard drives as well as to other Synology or rsync-capable servers. However, with no volume encryption or IP-based block-out system security on the NAS device is unfortunately lacking.

Though this NAS device won't offer all the features small businesses are likely to want, home users will appreciate the media browsers and ease of use. The quick performance also means this NAS device will be able to stream high-definition media to multiple computers without a stutter.