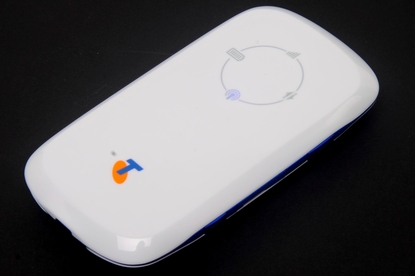 Telstra has finally jumped on the portable Wi-Fi modem bandwagon, letting up to five devices simultaneously enjoy the Next G network's wide coverage and fast speeds. The Telstra Pre-Paid Mobile Wi-Fi modem gets hot during use and could have better battery life, but it remains a good solution if you're after some flexibility from your mobile broadband device.

Telstra has finally launched a mobile broadband Wi-Fi modem that allows multiple devices to connect to it wirelessly for shared Internet access. A similar product to Virgin Mobile's Wi-Fi Modem and the Vodafone Pocket WiFi, the Telstra Pre-Paid Mobile Wi-Fi modem, which up to five devices can connect to, offers better speeds and coverage than its competitors, but gets hot during prolonged use and its battery life could be better.

The Telstra Pre-Paid Mobile Wi-Fi modem is a straightforward device; it is made of white plastic and is very light. It looks and feeling quite flimsy. The rear battery cover feels cheap and creaks annoyingly when pressed, and the power and WPS button, along with the microSD card slot cover, also contribute to the modem's budget feel. When connected over Wi-Fi, multiple computers can access the content of a microSD card.

The Telstra Pre-Paid Mobile Wi-Fi modem charges via a standard miniUSB port through an included AC adapter or USB cable, and the device can still be used while it is charging. The modem gets quite hot during both charging and regular use; if you keep it in your pocket, this is quite noticeable; while it won't burn you, it can get a little uncomfortable.

The Telstra Pre-Paid Mobile Wi-Fi modem has four LED indicators on the front denoting battery, signal, network and Wi-Fi. It's an inferior display to the one on Vodafone's Pocket WiFi, which uses a handy monochrome OLED display that also shows how many devices are connected, and how much data is being used.

As with similar products, the Telstra Pre-Paid Mobile Wi-Fi modem is very simple to set up: you simply insert your SIM card and the battery, turn the unit on and it is ready for use. The unit comes with a default SSID and WPA key, which is printed on a card in the box. You can change the network name and the password by accessing the device's Web interface; settings are minimal and the layout of the page is basic and rather ugly, but it does the job and is something you won't need to access too often.

Up to five separate devices can connect simultaneously to the Telstra Pre-Paid Mobile Wi-Fi modem, and we didn't notice much slowdown with two smartphones, an iPad and a notebook connected simultaneously.

As is always the case when it comes to mobile broadband, the speed of the Telstra Pre-Paid Mobile Wi-Fi modem will depend on a number of factors, including the mobile network, the area you're in, the time of day and network congestion. Telstra's Next G generally offers better network speeds and coverage than its competitors; the Telstra Pre-Paid Mobile Wi-Fi modem is capable of theoretical maximum download speeds of 7.2 Megabits per second (Mbps) and upload speeds of 5.8Mbps.

Using our Broadband Speed Test, the Telstra Pre-Paid Mobile Wi-Fi modem managed to achieve download speeds of up to 4.2 megabits per second (Mbps), but it regularly hovered around 2.8Mbps in North Sydney. Upload speeds were also stable at around 1.4Mbps.

Telstra claims the Pre-Paid Mobile Wi-Fi modem has a battery life of up to four hours, but during our tests it lasted just over three and a half hours before it ran out of juice. This is a little less than the Vodafone Pocket WiFi and the excellent NetComm MyZone 3G.

The Telstra Pre-Paid Mobile Wi-Fi modem is available for $149 and includes an initial 5GB of data that can be used over 90 days.