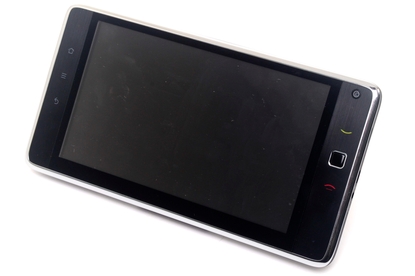 Despite its obvious shortcomings, the Telstra T-Touch Tab is a reasonable multimedia device and Google's Android operating system is far less restrictive than Apple's iPad/iPhone platform. The T-Touch Tab is effectively alone as an affordable, entry-level tablet that doesn't skimp on too many features.

Telstra has customised the T-Touch Tab interface. The home screen is split into five tabs at the bottom of the screen — home, Web, entertainment, communications and favourites. Each of these tabs has two home screens, making for a whopping 10 home screens in total. You can customise each screen as you wish, including removing any Telstra widgets or shortcuts from the home screens. Surprisingly, you can also uninstall most Telstra apps from the T-Touch Tab — the only Telstra shortcuts and services that can't be removed are Foxtel, Email, MySync, WhereIs Navigator, Scan Code and TelstraOne.

The Android notifications toolbar has also been modified — tapping the "i" button in the top-right corner brings down a split screen with notifications on the left and open tasks on the right. You can quickly close open applications by pressing the "x" button next to the name of the app. The toolbar displays icons for Bluetooth, Wi-Fi, screen brightness, 3G, mobile coverage and battery. Tapping on the Bluetooth, Wi-Fi or screen brightness icons allows you to quickly adjust the settings, which is very handy. 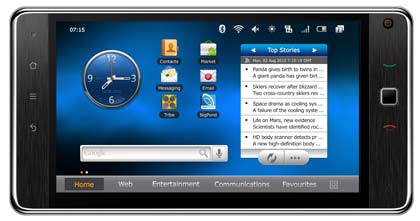 The Telstra T-Touch Tab features a modified home screen interface that is split into five tabs at the bottom of the screen, effectively creating 10 customisable home screens.

The Telstra T-Touch Tab's performance is adequate, but not outstanding. Swiping through home screens often results in slight lag and the transitions between screens isn't as slick or smooth as higher priced alternatives. The T-Touch Tab also lacks multitouch zooming, which is particularly annoying when using the browser or Google Maps. It doesn't support Flash video, and it doesn't have haptic vibration feedback.

The Telstra T-Touch Tab doubles as a fully functioning smartphone, though there is no earpiece on the device so you can't hold it up to your ear like a regular phone (this is a good thing as you will look like a complete idiot doing so). Instead, you can use the built in speakerphone, which possesses surprisingly good audio quality, or pair the device with a Bluetooth headset. The T-Touch Tab also possesses dual cameras: a front-facing camera for video calls, and a 2-megapixel camera on the rear for taking photos and recording video.

Unfortunately, the Telstra T-Touch Tab has mediocre battery life. Even with moderate use, it rarely lasted three hours, and struggled to even last this long when used regularly. We watched 20 minutes of an AVI video file, listened to music, and periodically used the browser and a few Web-centric apps like Facebook and Twitter and the T-Touch Tab needed a recharge before the two hour mark. On a device that’s been tailored for Internet and multimedia use, this is a real black mark.

Despite its obvious shortcomings, the Telstra T-Touch Tab is a reasonable multimedia device and Android is far less restrictive than Apple's iPad/iPhone platform. While the Dell Streak and the upcoming Samsung Galaxy Tab could be considered competitors, their higher price means the T-Touch Tab is effectively alone as an affordable, entry-level tablet that doesn't skimp on too many features.