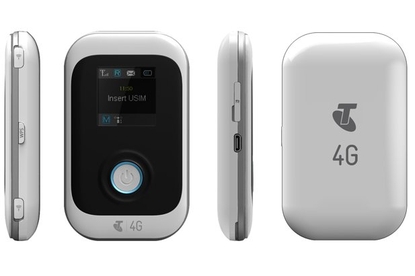 Telstra has continued to add to its 4G product portfolio since the network was switched on in late 2011, but the pre-paid Wi-Fi 4G modem is the first product targeted at pre-paid users. It offers excellent speeds provided you are in a 4G coverage zone and is competitively priced.

The Telstra pre-paid Wi-Fi 4G is a battery powered, portable modem manufactured by ZTE. It allows up to five Wi-Fi enabled devices to connect to it wirelessly for shared mobile Internet access, through Telstra's 4G network where available. It offers largely the same functionality as the Mobile Wi-Fi 4G modem, which was made available for post-paid customers back in March.

The Telstra pre-paid Wi-Fi 4G modem is a fairly simple device, about the size of a deck of cards in both height and width. It's constructed largely from glossy white plastic, though the front of the modem has a gloss black panel which houses the small OLED screen. A chrome strip runs around the edge of the modem in an attempt to add a touch of class, while the corners are smooth and round making the device comfortable to hold.

A large power button sits below the screen with an LED ring surrounding it that flashes blue when the device is powered on. A WPS button and two antenna sockets on the right side allow users to boost reception in flaky coverage areas if needed. The pre-paid Wi-Fi 4G charges via a micro-USB connection on the left side, next to a micro-USB card slot that's concealed by a plastic flap. If the battery is flat the pre-paid Wi-Fi 4G modem can be connected to a computer via the included USB cable and used as a wired modem. 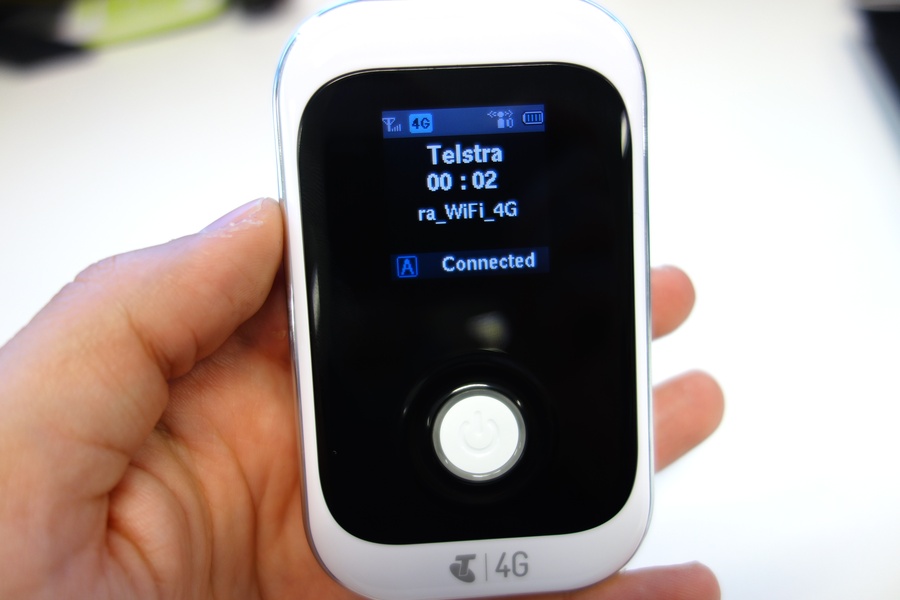 The Telstra pre-paid Wi-Fi 4G modem is about the size of a deck of cards.

Aside from impressive 4G speeds where available, the best feature of the pre-paid Wi-Fi 4G's design is the LED screen. It displays information including signal strength, the number of devices connected, a battery level indicator, how long a connection has been active for, the network type and the default SSID network name. The screen can also display your network password so you don't have to remember it every time you want to connect a new device, though this can be hidden if you're concerned about security.

To hide the displaying of your network password and change any other settings, you'll need to access the Telstra pre-paid Wi-Fi 4G modem's Web interface. It's accessible by pointing your browser to http://telstra.wifi.4g and logging in using the default password supplied. The Web interface is both straightforward and functional. Options include editing the SSID name and password, editing the APN, changing the screen time and a host of other advanced networking and security options.

4G speeds impressive, if you can get them

The Telstra pre-paid Wi-Fi 4G Modem is marketed as a 4G device, but it uses both 3G and 4G technology. If you move out of an area with 4G coverage, the pre-paid Wi-Fi 4G falls back onto the company's regular Next G network, supporting HSPA+ dual channel speeds of 1.1 megabits per second (Mbps) - 20Mbps.

The Telstra pre-paid Wi-Fi 4G modem promises "typical" download speeds ranging from 2Mbps to 40Mbps when in a 4G coverage zone, while typical upload speeds range from 1Mbps to 10Mbps. These are best case scenarios though, and the results we achieved were far less, albeit still pretty impressive. Like all mobile broadband products, the speed of the pre-paid Wi-Fi 4G modem will depend on a number of factors including time, location, network coverage, signal strength and congestion.

Telstra's 4G coverage is currently available in all eight capital cities (5km from GPO) and their respective airports in Australia, along with over 80 regional and metropolitan centres (3km from city centre), so you obviously don't get 4G coverage everywhere. Telstra says it will continue the LTE rollout into other coverage areas "where demand requires the extra capacity", so the network will continue to expand over time. 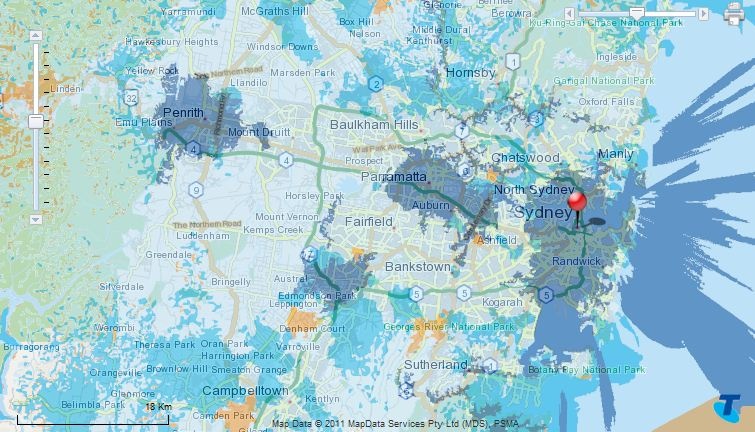 You'll need to be in a Telstra 4G coverage zone to achieve the fastest possible speeds. In the above map, 4G coverage is denoted by the dark blue colour. (Image credit: Telstra)

If you happen to be in a 4G coverage zone, you can expect impressive speeds. Using PC World's Broadband speed test, we managed to achieve a top download speed of almost 30Mbps, though speeds generally hovered between 16Mbps and 23Mbps on most occasions. Upload speeds during testing peaked at around 15.8Mbps (higher than Telstra's quoted 10Mbps). We also used the pre-paid Wi-Fi 4G modem to stream live video for almost two hours and it worked seamlessly.

Perhaps the biggest disappointment of the Telstra pre-paid Wi-Fi 4G modem is its battery life. In our tests, it lasted just over three hours before needing to be recharged. This is nearly an hour short of the four hours ZTE quotes on its specifications sheet. It's not a terrible result, but if you will be using the modem on a daily basis and aren't always near a computer or power outlet, it may be an idea to purchase an extra battery. Unlike many other devices of this kind, we found that the Telstra Pre-Paid Wi-Fi 4G doesn't get too hot with constant use. It warms up, but doesn't become hot enough to be an annoyance.

The Telstra Pre-Paid Wi-Fi 4G sells for $169 and comes with 5GB of pre-paid data to use with a 30 day expiry. A full list of Telstra's pre-paid mobile broadband plans can be found on its Web site.