So how do you spice up a turn-based strategy game previously based on classical figures and historical battles? 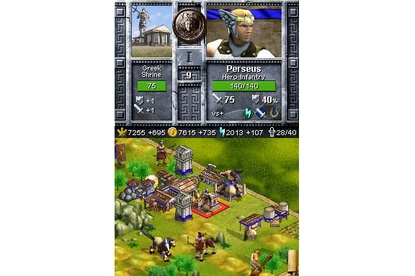 Age of Empire fans beware: while this game is certainly the best in the series, it also closely resembles the previous iteration, making it feel less like a history lesson and more like deja vu. Age of Empires: Mythologies is the latest instalment in the DS's Age of Empires games, following up the entertaining and well-received AOE: The Age of Kings. And while there are a number of differences between these two titles, on the whole this game is pretty similar to its predecessor, which is both a blessing and a curse.

So how do you spice up a turn-based strategy game previously based on classical figures and historical battles? According to THQ, you add mythological monsters and make the battles more fictitious, because if there's one thing school has taught us, it's that "history" and "facts" are not fun.

The Age of Empires Strikes Back

Like Age of Kings, Mythologies is a fairly deep strategy title, with a wide array of unit and terrain types, distinct monsters and enemies, and diverse technologies to research. It also successfully utilises the DS's unique control schemes, making for a very sound and well-conceived presentation. In addition, Mythologies' graphics have been noticeably improved upon, making this the Age of Empires title to own if you haven't played the previous iteration.

The Gods Are Angry

However, if you are fairly familiar with the first title, there are a few things about this game that might give you pause. For one, with the gameplay being as similar as it is to Age of Kings, the addition of the Mythological characters and god powers needed to create enough original content to keep the series fresh and interesting. Unfortunately, these additions don't completely deliver. The effectiveness of the new god powers is often difficult to immediately see, making their use infrequent at best. And the new myth units don't feel all that much different from the regular mortal units. Players may also find that the larger scale battles tend to drag and feel repetitive, especially when they can see that the battle has already been decided in their favour, but they still have to go through the formality of killing every opposing unit on the map. That being said, if you haven't yet played an Age of Empires title on the DS, Mythologies is without question the most competent turn-based strategy game available for the console, and if you're a fan of mythology, all the better.