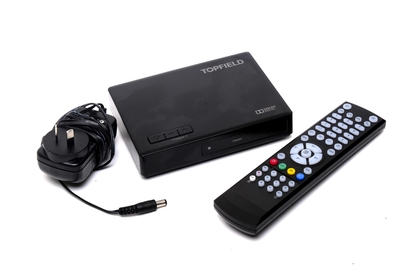 This inexpensive Topfield set-top box allows you to tune in to SD and HD digital TV broadcasts easily. It even has a USB port so that you can plug in a hard drive and use it as a recorder and media player. Great for anyone who doesn't want to splash out on a large PVR.

Topfield's TBF100HD is budget set-top box device with basic functionality and a small size. It's a useful device to consider if you want to add digital TV reception to an old TV, or even if you want a tuner for a caravan or garage.

There isn't much to this unit at all. You get a small box with a channel display on the front and some ports on the back, as well as remote control. Connections include HDMI, composite video and audio, a USB port and two antenna ports (one which is a pass-through). It ships with a small 12V power adapter rather than an internal power supply, and it's a breeze to set up and use. For our tests, we plugged in a rooftop antenna and connected it to a TV using both HDMI and composite connections (not at the same time of course).

When you switch it on for the first time, the set-top box asks you to confirm the language and country details, and it does a sweep to detect the channels in your area. For us, the scan took only a few minutes and it found all of the channels it was supposed to. it's an HD tuner, so this included channels such as One HD and ABD News 24. Channel changes were sluggish compared to many new tuners we've seen, but since this is such an inexpensive box, we weren't surprised by this. Picture quality was decent and signal quality was excellent for all channels except ABC, which was a little erratic in our environment.

Because this device is only a set-top box, you can't use it to record any shows unless you plug in a USB hard drive. Once you do, you'll be able to hit record manually, or use the timer (or EPG) for any shows that you want to watch later on — you'll even be able to use time-shifting. We had no problems using a regular, 500GB, NTFS-based USB hard drive with the Topfield. It was able to record programs without requiring a format. We were also able to play media files (AVI and MP4) off the hard drive through the set-top box's media player function, as well as listen to MP3s.

The remote control could be better. It has very small playback control buttons that are hard to use and the buttons are very squishy overall. But apart from that, this little set-top box is ideal if all you want is something basic through which to watch and record digital TV, although you'll need to supply your own external hard drive for the latter. It's also a decent media player.