The Topfield TRF-7160 is a versatile PVR with two digital TV tuners and a 500GB hard drive; it can record up to four TV shows at once. It also has network connectivity and a USB port, so you can get recordings off it and also put DivX, Xvid, MP3 and JPEG files on it. Some of its interface needs work, but overall it's an easy to use PVR that's well worth considering.

Update: The TRF-7160 now gives you the ability to record a TV series without having to hook up the device to the Internet. Topfield calls this Intelligent Recording (or Topfield IR) and claims it's an Australian first for a PVR. New TRF-7160 units will have this ability straight out of the box, existing users can update the firmware using the instructions on this page: http://www.itopfield.com.au/seriesrecord/.

Topfield's TRF-7160 is a personal video recorder (PVR) with a 500GB hard drive and two digital TV tuners. You can record shows onto its internal hard drive and time-shift TV broadcasts. You can also attach a USB 2.0 hard drive in order to view files you've downloaded from the Internet or ripped from a DVD or connect the PVR to your home network so that you can download from and upload files to its hard drive. It's quite a versatile PVR, but it's by no means perfect and could use a more intuitive on-screen interface.

The Topfield has one hard drive in it and the PVR doesn't make any noticeable noise while it's operating. It's a basic-looking unit with an old-style display panel on the left that shows the time when the unit's in standby mode; it shows the time, channel and hard drive status when it's switched on. There is a bright blue light in the centre of the unit that remains illuminated whether the PVR is powered on or in standby mode — and it's very annoying. The right of the front panel has a cover that flips down to reveal volume and channel buttons, and it also has an undocumented slot. It's a bit of a waste of space.

The rear has one antenna port as well as Ethernet, USB, and digital and analog video connections. You can connect the TRF-7160 to a TV or receiver via HDMI, but it also has component and composite video outputs — cables for all of those connections are supplied in the box. On an older, 4:3 television, you might only be able to use the composite connection, which will flicker slightly, but will still provide very clear and vibrant picture. (You'll have to manually change the aspect ratio to 16:9 letterbox format in order to properly fit everything onto the screen; thankfully, this can be done with a press of the A/R button on the remote control.) The HDMI connection displays a crystal clear 1080i image on a big-screen, Full HD TV. During our tests, the TRF-7160 consumed close to 30 Watts while it was operating and 5.6W when it was in standby mode.

When you first switch on the Topfield, you're greeted with a black screen and a very simple menu system that consists of five icons: Recording, Entertainment, Settings, Installation and Information. Installation is the first item you must visit, so that you can search for TV channels.

The Topfield took around two minutes to find all of the stations in our area, using an antenna more than 25 years old. Once the scan is complete, the black background will go away and the current TV station you're on will start playing. From then, simply exit the menu and start watching.

Channel changes are super-quick using the P- and P+ buttons on the remote, but you can also use the OK/List button to skip directly to a channel you desire. The channel list can be easily edited by pressing the white Option button on the remote — you can quickly get rid of duplicate and unwanted channels. The Guide button on the remote can be used to bring up an overlay of the Program Guide, and you can click on a show to start watching it, or you can toggle the Episode Guide on and select programs that you wish to watch or record in the future. Click on a show twice to tell the Topfield to record it.

You can record up to four programs with the TRF-7160, but those four programs can only be from two main channels and their associated sub-channels. For example, you can record simultaneously from ONE HD, TEN Digital, GO! and NINE Digital. But you can't simultaneously record programs from TEN Digital, NINE Digital, SBS ONE and ABC ONE. While recording four programs from two channels, you won't be able to watch a program on a third main channel. However, you'll be able to play back a recording while you're recording live TV. Bringing up a list of recordings and selecting one is simple and swift.

With 500GB of internal storage, you can record just under 500 hours of standard-definition video or just under 90 hours of HD video; you can also record directly onto an external hard drive.

The TRF-7160 has a media function for playing music and watching videos. To view media files, you can either plug in a USB 2.0 drive or you can log in to the PVR's Web interface to upload them to the internal hard drive. 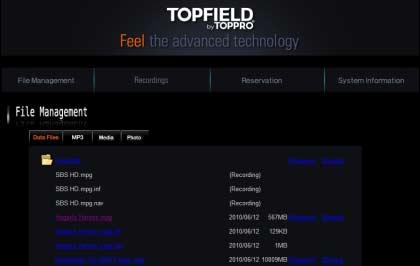 The Web interface is basic and easy to use.

Media playback on the TRF-7160 could be better though. While you can play videos and music that have been transferred to the PVR's internal hard drive — or off an attached external drive — it's not easy to play a series of files and skip between them. You have to either select them all while viewing the folder they're in, or press play while highlighting the folder containing those files. It's not an intuitive process. 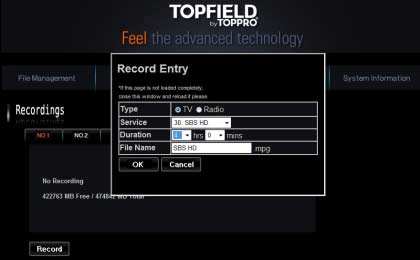 Using the Web interface, you can download recorded programs to your PC, or upload files from your PC to the PVR's hard drive, as well as schedule recordings.

To set up the Web interface, you need to plug the PVR into your router and then configure its IP address. (We used Belkin Powerline adapters to connect the PVR in the lounge room to the router in the bedroom) You then need to add a username and password. To access the Topfield from your computer, you just enter its IP address into your Web browser and log in by using the user credentials you created.

You can download files from the PVR to your PC, and you can upload files to its hard drive so that you can play them on the PVR. It will playback Xvid- and DivX-encoded files, as well as MP3s, and you can view JPEG photos on it, too. Unfortunately, only one file at a time can be uploaded, which can be a pain if you're trying to upload music or photos — you're better off just connecting a USB drive for these — but it's not much of an inconvenience for video files.

We would love it if the Topfield could browse a network directly and stream files off a LAN; similarly, we wish the PVR would show up as a network device from which we could stream recorded shows. Nevertheless, once you learn how to use the Topfield's interface it's easy to transfer files to and from it.

Using the default April 2010 version of the firmware, the TRF-7160 gave us a few problems. Its Web interface was a little buggy as it consumed a lot of CPU time when we uploaded files from a PC. Recorded TV shows can't be played back through Windows Media Player (this is documented in the manual, which tells you where you can go to download a player).

These problems were fixed when we switched to the latest firmware version (May 2010), and this even added a couple of new features: the ability to use TAP files (applications that can be uploaded to the PVR to change the look of its menu or add new features) and the ability to use NTFS-formatted hard drives instead of just FAT32-formatted drives. The firmware update process was very easy over the network — the TRF-7160 found and installed it automatically.

Overall, we quite like the Topfield TRF-7160 because it's easy to set up, it can record up to four shows at once via its two tuners, and changing channels was very quick. We like the Web interface, as well as the ability to attach a USB drive. The only things we'd like improved are the media playback interface on the PVR itself so that you can just play a list of files without first selecting them all, and we'd also like it if the Web interface could be set up to upload multiple files in one hit. But those are relatively minor quibbles; the TRF-7160 is definitely a unit worth considering.