Toshiba Tablet AT200 review: The AT200 is the world's thinnest and lightest 10.1in tablet The Toshiba AT200 tablet is the thinnest and lightest 10in tablet we've ever reviewed. However, it has a few niggling design flaws and is let down by outdated Android software that makes it hard to recommend.

Marketed as "the world's thinnest and lightest 10.1in tablet", Toshiba's AT200 certainly looks the part. Despite its razor thin credentials, however, the AT200 isn't as well built as it looks and is still waiting for the latest Android software update to address a number of issues.

Ultralight and super-thin. That's how Toshiba describes the AT200. While this is definitely marketing speak, it's hard to argue with the company once you've held the AT200 in your hands. At just 535g and only 7.7mm thin, the tablet is simply a featherweight to hold. It is without a doubt the most comfortable tablet we've ever used single-handedly. While the weight difference may not sound like much compared to the new iPad, the difference is immediately noticeable and something you'll quickly come to love.

Aiding the design is the fact that the AT200 looks the part, too. It has an attractive magnesium alloy finish on the rear, a gloss black bezel surrounding the screen on the front, and a recessed edge that has a gloss silver strip running through it. The latter in particular immediately sets is apart from the many bland, black slabs that make up most other Android tablets on the market. 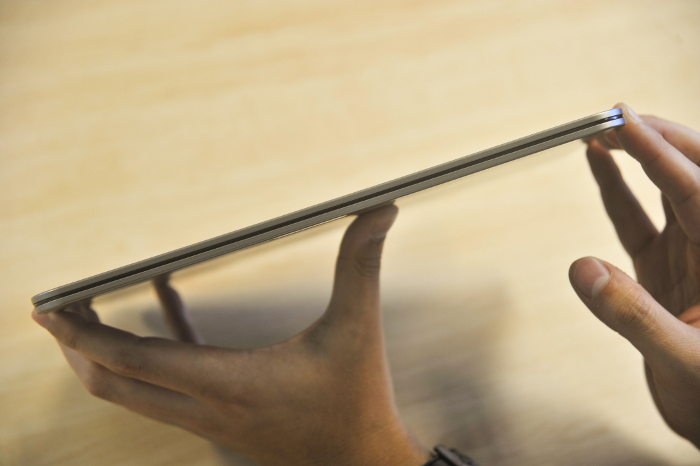 Sadly, there are a number of flaws with the design of the AT200 that detract from its overall appeal. The rear casing noticeably creaks towards the bottom when pressed. The metallic finish scratches way too easily. Worst of all, the outer rim on the back of the device has a sharp edge that digs into your fingers when holding the tablet. If you look closely along the edges you'll see that this finish is uneven, with the gap noticeably wider in some areas than others. This lack of attention to detail simply isn't good enough on a device commanding almost $600.

The Toshiba AT200 does have some other redeeming features. Users looking for flexibility will be pleased with the microSD card slot, a micro-HDMI port and a micro-USB cable. We like how none of these ports are hidden behind annoying plastic flaps or doors. What we don't like is the ungainly, chunky charger Toshiba includes. The charging connector is thicker than the tablet itself and seems overkill when many other tablets charge via a regular micro-USB connection. You can at least choose to charge the Toshiba AT200 via its micro-USB port, but charging time is significantly slower. 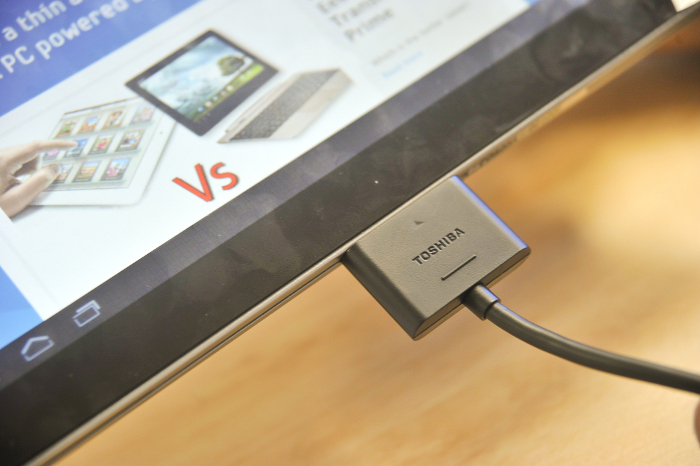 The Toshiba AT200 has a 10.1in Gorilla glass screen with a resolution of 1280x800. The screen isn't going to win any awards and certainly isn't as bright or crisp as the new iPad, or even the ASUS Eee Pad Transformer Prime. We also dislike the small, visible square shapes all over the screen. This imprint appears to be on the layer directly below the outside of the screen and is very noticeable at certain angles, particularly if there is light shining on the screen.