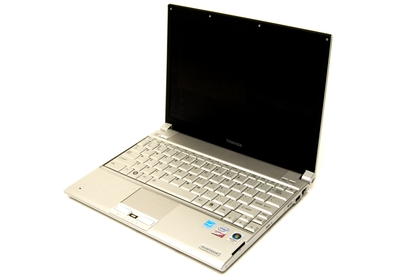 The Toshiba Portege R600 is the ultimate ultraportable laptop for a user who's constantly on the move. It's extremely light and strong, and it has a built-in optical drive and all the ports you're likely to require.

You'd be hard pressed trying to find a lighter notebook than Toshiba's Portege R600 (PPR61A-00400R), which weighs only 950 grams and is aimed at business users who regularly need to travel. It's a 12.1in laptop and it's very thin, but it doesn't have cut-price parts running it: you still get an Intel Core 2 Duo CPU, 3GB of RAM and a 120GB solid-state drive. It runs Windows Vista (or Windows XP — you get to choose).

The Intel Core 2 Duo U9400 runs at 1.4GHz and it is an Ultra Low Voltage CPU. This means that it produces less heat than a regular CPU, which is important given how small the notebook's chassis is. It's not a very quick CPU, which means you won't want to use it for advanced content creation, such as editing and creating videos. However it is efficient for everyday office and Web tasks, encoding music, creating presentations, editing photos and watching movies. It recorded a time of 2min 7sec in our Blender 3D rendering test, which is about one minute slower than a laptop with a high-end (non-low-voltage) Core 2 Duo.

Its performance was swift when using office applications and browsing the Web, but it became a little slow when it was displaying a DVD in the background (with CPU usage at 27 per cent). Web sites with plenty of Flash advertisements might also slow it down depending on how many pages you have open at one time.

You also get 3GB of RAM, integrated Intel graphics (which use up approximately 150MB of the RAM), and a fast 120GB solid-state drive. This drive recorded a speed of 33.31 megabytes per second in our file transfer tests, which is a shade quicker than the 7200rpm drive in Dell's XPS 13 and approximately 13MBps faster than a notebook with a 5400rpm drive (such as Sony's VAIO VGN-Z17GN/B).

The design and build quality of the Toshiba Portege R600 (PPR61A-00400R) are what set it apart from most ultraportable laptops. Its magnesium body is very light and strong, and Toshiba claims it can withstand up to 100kg of pressure (if it's evenly dispersed across the whole unit). Its screen feels very flimsy because it's so thin (only 5mm thick!), but it's actually designed to be flexible. It 'floats' inside the lid, instead of being screwed in place, which is one of the things that allow it to be so flexible. It's 2mm thinner than the Portege R600's DVD burner, which is 7mm thick!

The 12.1in screen has a native resolution of 1280x800 pixels, and it is transreflective. This means that it can use sunlight to produce its brightness, instead of the backlight. This can prolong the battery life, and there is a switch just above the keyboard that allows you to switch off the backlight when you are outdoors. In our tests the screen was easily viewable in bright sunlight, where it achieved the equivalent brightness of the backlight. In shaded areas it was a little dimmer than it was when using the backlight. Indoors, the backlight will have to be used.

A spill-proof keyboard is installed on the Portege R600. It can withstand accidental water, coffee, and coke spills. It doesn't have drainage points, as it uses a seal to keep the liquid from entering the base of the unit; you'll have to tip it upside down to get rid of the liquid. It's a comfortable keyboard to use because the keys are full sized and produce good bounce-back, but we found the notebook's touchpad to be a little inaccurate — sometimes it did not allow us to move the pointer smoothly. Its buttons are also uncomfortable to press.

After a long period of use on your lap, the Toshiba Portege R600 will get a little warm on its left side, which is where the CPU sits, but it doesn't get hot enough to cause discomfort. Because it uses a solid-state drive the component that makes the most noise is the CPU fan; it won't drive you nuts, however.

On the road, the Toshiba Portege R600 can be used for a longer time than most ultraportable laptops. It lasted 3hr 8min in our DVD rundown test, and it will last longer if you don't run many CPU-intensive applications (for example, if you're just typing up a document or reading reports).

Despite the Portege R600's size, Toshiba hasn't skimped on connections for the laptop; it has two USB 2.0 ports (one of them doubles as an eSATA port), Gigabit Ethernet, 802.11n wireless networking, D-Sub, an SD card reader and headphone and microphone ports. It also has a rotational volume control, which is more convenient than using a function key combination to adjust the volume level. However, if you will be listening to music you'll want to wear headphones or plug in some speakers, because the Portege R600 has only one speaker and it's very weak.

Despite being so thin, the Portege R600 even has an ExpressCard/54 expansion slot, which can be used to house a 3G data card or fast external storage. When in the office, you can sit the laptop in a docking station.

There's no doubt that the Toshiba Portege R600 (PPR61A-00400R) is the ultimate ultraportable laptop for a user who's constantly on the move. It's extremely light and strong, and it has a built-in optical drive and all the ports and slots you're likely to require.