Toshiba's Portege R700 is one of the lightest, strongest and most powerful ultraportable notebooks on the market Toshiba's Portege R700 maintains the sleek, light and strong design of its predecessors, but it's a much more powerful notebook. It shuns ultra-low-voltage processors in favour of full performance Core 13, Core i5 and Core i7 CPUs and it can run up to 8GB of DDR3 SDRAM. It's a brilliant option for small business and corporate users who want something small and light that doesn't compromise on performance and built-in features (such as an optical drive).

It feels like it was just yesterday we awarded the 12.1in Portégé R600 an Editor's Choice for its lightness, sturdy body and complete feature set. In reality, it was over 14 months ago. While the R600 is still a little marvel, we now have the 13.3in Toshiba Portégé R700 to look forward to in July. It improves on the R600 in many ways, most notably in the performance stakes.

Whereas the Portégé R600 packed an ultra-low-voltage CPU within its thin confines, the Portégé R700 runs regular Core i3, Core i5 or Core i7 CPUs. In fact, ultra-low-voltage CPUs won't be offered at all for the R700. It uses a new thermal management system called Airflow Cooling Technology, which has been co-developed by Intel and Toshiba to allow it to run the high-end CPUs without becoming a hand heater. We don't have the full details of this cooling solution yet, but Toshiba says it has to do with the spacing of all of the components in the chassis.

Read our full review of the Toshiba Portege R700 (PT311A-00J00Q) to see how it faired in our performance tests and overall evaluation.

Initially there will be five models offered in the Portégé R700 range and their specifications will vary, but some things to look forward to are the afore-mentioned Core i7 CPU, the ability to run up to 8GB of DDR3 SDRAM (via two stacked memory modules and using the 64-bit version of Windows 7) and the ability to run a third-generation solid-state drive (SSD) with a storage capacity of up to 256GB.

Graphics performance will be handled by the integrated Intel QM57 chipset, which will be powerful enough to drive the 1366x768-resolution screen, as well as Full HD resolution via the HDMI port in the side of the chassis. You also get two USB 2.0 Sleep-and-Charge ports, VGA, a combination eSATA/USB 2.0 port, headphone and microphone ports, Gigabit Ethernet, 802.11n Wi-Fi, Bluetooth 2.1, an SD card slot and, depending on the model you choose, you'll get an ExpressCard slot and a built-in 7mm thick DVD burner.

More ports are available in the R700's optional docking station. It's a new dock that's not compatible with the Portégé R600. It has HDMI and two USB 3.0 ports in addition to VGA, USB 2.0, audio, serial, and Gigabit Ethernet ports.

Traditionally, the Portégé has been a beacon for corporate users, but with the breadth of full performance CPU offerings, it should also appeal to small business users who want to retain high performance and plenty of features in a light and easy to carry notebook. The Portégé R700 is actually bigger than the R600 — it uses a 13in screen rather than a 12in, yet it doesn't feel much heavier. The Portégé R700 (PT311A-01L00Q), for example, is only 1.1kg, which is only about 150g more than the R600. The R700 is wider due to its larger screen, but the depth and height are almost identical — the R600 is thinner by virtue of a sloped design.

Check out our Toshiba Portégé R600 strip show in which we look at the internal design of the lightweight marvel in detail.

Gone is the silver styling of the Portégé R600, too. The Portégé R700 has a brushed black finish that looks elegant and definitely gives it a 'boardroom' feel. The engineering behind the R700's exterior panels is much more interesting however. Toshiba has used magnesium alloy with a honeycomb reinforcement that gives it better torsional rigidity. It means that the panels can withstand more force when they are bent.

The port design of the R700 is also said to be improved over the R600 in that all of the major ports use harnesses now. The power and USB ports, which are the most used ports on a notebook, all use leads to connect to the motherboard, which means that there's less chance of damaging the board if you plug a peripheral in too forcefully. The power port even has three dabs of glue holding it in place, which let it withstand more force without getting unstuck.

The optical drive, hard drive and dock connections, which were traditionally connected and held to the motherboard via solder alone, now overlap the circuit board and are screwed together so that the solder doesn't have to survive any tugs from these connections. All these little behind the scenes tricks should come together to hopefully make the Portégé R700 immune to breakage. Even the wireless antennas have undergone a transformation and are now 'chip-mounted'. Their wires still snake around the screen though. 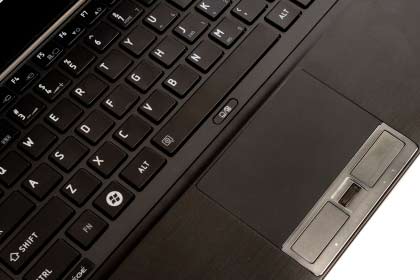 The keyboard feels good to type on and the touchpad is large (8.6x5cm) and smooth.

The keyboard has undergone a transformation as well. It's what Toshiba calls 'tile style', which is what other vendors describe as chiclet and island-style keyboards. The keys feel good to press and can all be found in familiar positions in the layout. They are big enough so that you won't end up mishitting when touch-typing. Above the touchpad there is now a button for disabling it.

The notebook will be available with 3-cell, 6-cell or 9-cell battery options. The 3-cell and 6-cell batteries will sit flush with the chassis.

Perhaps the most noticeable omission from our point of view is the rotational volume knob on the side of the chassis, which we love on the R600. The R700 even has better audio than the R600, as it now has two speakers whereas the R600 had one. The screen is also different compared to the R600. It's not a transreflective screen like we saw on the R600, which could use sunlight to become brighter while outdoors. It's still a matte screen, so it won't suffer from reflections in an office environment, but Toshiba says that some customers are pining for a glossy version.

The R700 will be available from July and pricing will start from $2170, which is a much more affordable entry point than the R600 offered. From the looks of it, the R700 will be the ultimate ultraportable laptop as it will offer an optical drive, an expansion slot, plenty of CPU performance and fast storage, all in a package that will weigh less than 1.5kg.