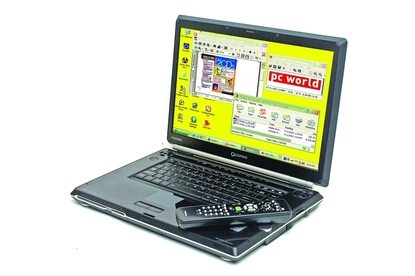 The unique Qosmio G20 goes a long way to justifying its price with home entertainment features to die for.

Its features include an specialised image processing chip and a second backlight in the 17" widescreen display to offer a brightness equivalent to that of a flat-panel television.

It also includes a remote and TV tuner, and there's a Linux-based system that enables the notebook to begin playing back CDs, DVDs and television almost immediately--without waiting for Windows to start.

Our PC WorldBench 5 productivity application benchmark scored a credible 82 on the G20, and the G20's 128MB Nvidia GeForce Go 6600 graphics controller helped it achieve an very respectable score of 11,864 in 3DMark 2001. If you have deep pockets and want to merge your lounge appliances and PC into one streamlined device, look no further.