A great Toshiba laptop for home, work and uni. 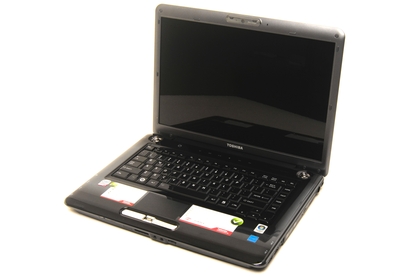 The Toshiba Satellite A300 is comfortable to use, looks good, and has plenty of ports. It's performance was a little slow in our CPU tests, but overall it's a great laptop for the home or office.

The Toshiba Satellite A300 (PSAGCA-09Y01N) is almost the perfect laptop for home users. It looks good, has a big screen, is comfortable to use, and contains a large array of ports. It's also not a heavy laptop; considering it has a 15.4in screen, its weight of 2.8kg is relatively light. You should be able to cart it to the office or the lecture hall without breaking too much of a sweat.

However, you won't get much life out of it if you use it on the road. It only lasted for 1hr 20min in our battery run-down test. In this test we loop a DVD with the screen at full brightness and the wireless connection enabled. With a balanced power scheme and a workload that utilises only a small percentage of the CPU's power, its 6-cell battery should last a little longer.

The Toshiba Satellite A300 has an Intel Core 2 Duo P8600 CPU running the show at 2.4GHz, and it's surrounded by 4GB of DDR2 RAM, a 4200rpm 400GB hard drive, and an ATI Mobility Radeon HD 3650 graphics adapter. When running at full-bore the notebook doesn't get overly warm, so it can be used on your lap for long periods of time without feeling uncomfortable.

Despite the good specs, it's not a speedy unit; it managed to encode 53min worth of WAV files to 192Kbps MP3s in 1min 11sec, which is at least four seconds longer than we were expecting. Nevertheless, the 4GB of RAM in the Satellite A300 and the relatively fast hard drive (it recorded 19 megabytes per second in our file transfer tests) will let you run photo editing applications comfortably, and multitasking will be a breeze.

Basically, you'll be able to use this laptop for watching movies, listening to and editing music, manipulating high-resolution photos, running typical office applications, and even video editing. In fact, it's a decent desktop replacement and it has almost all of the ports you will need, as well as a DVD burner. The only aspect of this laptop that needs work is its screen, which is only available with a native resolution of 1280x800. If you need more screen space, you will have to use an external monitor via the HDMI or D-Sub ports on the side of the laptop.

The notebook has a comfortable keyboard and touchpad. We're not sold on the glossy keys — they were hard to view at certain angles due to reflections — but touch-typists won't have a problem. The keys produced responsive bounce, and despite their glossy finish they weren't at all slippery or sticky.

We love the fact that the Toshiba Satellite A300 has so much useful connectivity built in to it. Not only do you get HDMI, FireWire, USB 2.0 and eSATA, you also get Sleep-and-Charge USB ports, which you can use to charge your phone or MP3 player even while the laptop is switched off and not plugged in (as long as the battery has some juice left in it). What we don't love is the amount of preinstalled software, which includes trial versions of Microsoft Office 2007 and Windows Live Onecare, and McAfee Antivirus.

The speakers on the Toshiba Satellite A300 are located above the keyboard (not near the palm rest where they might be muffled by your hands), and there is a subwoofer at the bottom of the unit. They produce clear and reasonably loud sound, and are perfect for listening to music or watching a movie in a small room (you won't have to carry external speakers if you want to listen to music in a hotel room, for example).

There are touch-sensitive buttons above the keyboard that can be used to control the media you are playing, as well as mute the volume. A volume control knob is present at the front of the laptop. It's easy to overlook it if you're constantly used to changing volume by pressing a function key combination — and we think it's a great feature. Additionally, the built-in FM tuner is great for when you want to listen to your favourite station (FBI 94.5 here in Sydney is our favourite) and don't have an Internet connection to stream it.

Overall, there is very little to dislike about the Toshiba Satellite A300. Along with the features we've already mentioned, it has dual-band 802.11n wireless networking, Gigabit Ethernet, a webcam, a fingerprint reader, a bright screen with good contrast and wide viewing angles, and an attractive design.

It would benefit from a backlit keyboard, a larger screen resolution and a 9-cell battery, but that would increase its price and take it out of the mainstream market. But as it stands, the Toshiba Satellite A300 is a great unit and well worth considering if you want a laptop that can be used at home, in the office or in the lecture hall.