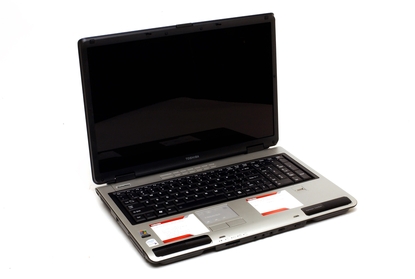 A powerful notebook that will run everything from Office to the latest 3-D games. Aside from flexing of the screen bezel, this is a solid machine that has a lot to offer.

One of Toshiba's top notebooks from their Satellite range, the P100 is powerful enough for anybody's needs, but will especially appeal to gamers. Achieving some of the best results we've seen in our benchmarks, and packing Toshiba's now standard Harmon Kardon speakers, along with a 17in display, the P100 is a great all around entertainment machine.

We expected big things from the Intel Core Duo 2.0GHz T2500 CPU with 2GB (2x 1GB) of DDR2 533MHz RAM, but we were still impressed by the 113 score in WorldBench 5, the highest yet achieved by a notebook. This score is in part helped by the 2GB of RAM. On top of this, the P100 has a Nvidia GeForce Go 7900GS graphics card, which helped the machine score 23,890 in 3DMark 2001 SE, overkill for most older games, and a respectable score of 3852 in 3DMark 2006. This machine is ideal as a game desktop replacement, or for playing games away from home.

Gamers will also enjoy the included numerical keypad. Most of the keyboard is ample in size, although the arrow keys have been awkwardly shrunk and all the surrounding keys, such as the right Shift and Enter keys, have been subjected to the same resizing. A selection of media controls give you quick navigation for your music and movie playback, and the touchpad uses Toshiba's two-in-one functionality with integrated hotkeys for e-mail, Wi-Fi and printing, not to mention three programmable hotkeys.

The two Harmon Kardon speakers, backlit by bright blue LEDs are hard to miss. However, putting garish luminescence aside, these speakers produce some of the best sound we've heard from a notebook, delivering clean tones with a good level of bass despite the lack of a sub-woofer.

As well as nice audio, the P100 comes with a better than average 17in screen, which has fair contrast and good brightness. While other P100 models have a higher resolution of 1680x1050, the high-end model we tested only supports a resolution of 1440x900. Although it would have been nice to get a slightly higher resolution, the screen itself has good viewing angles. Only a small amount of ghosting (a noticeable trail behind moving objects) was evident, so movie buffs and gamers should both be reasonably satisfied with the image quality.

Viewing your photos should be easy enough with a six-in-one media card reader (SD/SD-IO/MS/MS-Pro/MMX/xD) and if you intend to store those photos, your movies or your music on the P100, the 120GB hard drive should cover it. A DVD +/- RW drive means that not only can you watch a DVD movie, but you can also burn your data to free up storage space, while the included Express Media software allows you to watch your DVDs without having to boot into Windows.

Battery life wasn't great, but lands on par with similarly powered systems like the Dell XPS M1710. In MobileMark 2005's reader and productivity tests it ran for 141min and 116min respectively, while a worst-case scenario test (where we loop a DVD) ran for 97min; a little short of an average feature film.

The chassis is standard for Toshiba's 17in range and seems solid and robust. However, the bezel housing the screen flexes significantly, allowing the LCD to distort, which leaves room for potential damage. Applying pressure to the bezel near the edge of the LCD also causes distortion, so you'll want to be careful how you handle this screen. Measuring 394mm x 274mm x 35.9mm and weighing 3.3kg, this is far from the smallest notebook on the market. It serves better as a desktop replacement or for occasional portable use, rather than as a workstation for someone constantly on the move.

All the common video outputs are supported, including S-Video, VGA and DVI. A fingerprint scanner provides extra security and there's all the connectivity you should need with Wi-Fi 802.11a/b/g, Bluetooth, FireWire, Gigabit LAN and a 56Kbps modem.