A thin and light 11.6in laptop that's affordable and twice as fast as a netbook If you're after a small laptop that also has a little bit of speed, then the Toshiba Satellite T110 is a good choice. It's not perfect -- we think its touchpad and keyboard could be better, and its glossy screen is annoying -- but it's got plenty of useful features, it's relatively light and it has very good battery life.

Toshiba's Satellite T110 is a slimline laptop that's just a little bigger than a typical 10in netbook yet approximately twice as powerful. It's an 11.6in, Pentium-powered notebook and it can be used for watching videos, creating office documents and browsing the Internet. So basically it will do everything a netbook will do, but it will perform those tasks faster.

The Toshiba Satellite T110 is only 2.5cm at its thinnest point (with the lid closed) and 3cm at its thickest point. It weighs about 1.6kg and its build quality is good considering it's an entry-level notebook. It's similar in form and function to the HP Mini 311, which is an 11in NVIDIA ION–based netbook, and the HP Pavilion dv2, which is a 12.1in notebook with an AMD Athlon 64 X2 Neo CPU. At 11.6in, the Satellite T110 can be considered a netbook, but it's definitely more comfortable to use than one because of its larger keyboard, touchpad and palm-rest area.

The styling of the Satellite T110 is similar to other Satellite notebooks; there is a chrome trim and a pattern on the lid, palm rest and touchpad. Along the sides, you get three USB 2.0 ports, a D-Sub (VGA) port, 10/100 Ethernet, microphone and headphone ports, an SD card and an HDMI port. The screen has a webcam.

One of the USB 2.0 ports supports Sleep-and-Charge, which allows you to charge USB devices even when the notebook is switched off and not plugged in to a wall outlet. It's very handy for when you are travelling. There are various modes you can try in order to get Sleep-and-Charge to work with your device; we used mode 3 in order to get it to work with a Creative Zen digital audio player, but mode 4 works for iPhones.

Along with Sleep-and-Charge USB 2.0, the Satellite T110 inherits other features found in many of the bigger laptops in the Satellite range. These include plenty of diagnostics and settings utilities for the notebook's hardware. Among these utilities is a face recognition utility, the Eco utility, and a hard drive protection utility, which uses a sensor to park the drive's heads when it detects excessive movement. At its default setting, this protective utility is very sensitive and parks the heads even it you type a little too hard. This slows the system down, and if you are watching a video off the hard drive when the utility kicks in then it will stutter. 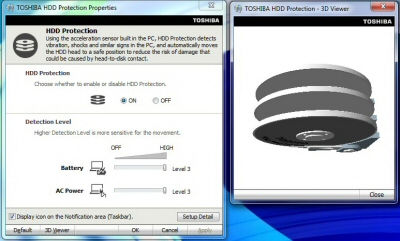 The hard drive protection utility is very sensitive and can park the drive's heads even if you type a little too hard.

Something new in the Satellite T110 is Toshiba's ReelTime utility. It looks like a reel of film that pops up when mouse-over it, showing you the most recent files you've accessed. Toshiba Bulletin Board is another new application; it lets you create boards and pin notes to them, create a to-do list, and view gadgets such a clock and calendar. It's something most of us probably won't use. 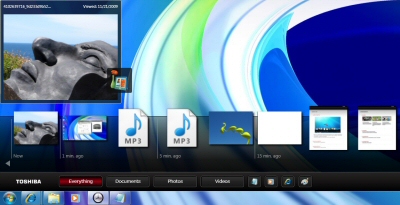 Toshiba ReelTime is a utility that allows you to quickly access recently used documents and media files.

On the inside, the Satellite T110 is powered by an Intel Pentium SU2700 CPU, which is a low-voltage, single-core CPU that doesn't have Hyper-Threading. It runs at 1.3GHz, which is 300MHz slower than an Intel Atom-based netbook. Despite this, and despite the fact that Intel Atoms have Hyper-Threading and the ability to process two instructions simultaneously, the Satellite T110 recorded 54 in our WorldBench 6 benchmark suite.

This score is 18 points higher than the fastest Intel Atom–based netbook we've seen (Samsung's NC10), 23 points faster than HP's Intel Atom–based Mini 311, and one point faster than HP's AMD Athlon 64 X2 Neo–based dv2. The Toshiba notebook even recorded a faster time in the multitasking test than both the Atom-based netbooks, though it was slower than the AMD-based notebook.

For media encoding, the Satellite T110 is twice as fast as a netbook with an Intel Atom CPU. It recorded a time of 3min 51sec in our iTunes test, in which we convert 53min worth of WAV files to 192Kbps MP3s. The Samsung NC10 performed the same task in 7min 52sec. It wasn't as fast as the HP Pavilion dv2, which performed the same task in 2min 17sec.

The good performance of the Satellite T110 is not just because of its CPU. It can also be attributed to the 4GB of DDR2 SDRAM and 250GB, 5400rpm hard drive. The drive recorded 25.3 megabytes per second in our transfer tests — 5MBps faster than a typical netbook. The laptop's integrated graphics adapter (Intel GMA4500 graphics) also scored approximately eight times better than a netbook in 3DMark06 (693). Not all of the 4GB of RAM is available to the system; 160MB is shared by the graphics card. Furthermore, if you use the 32-bit version of Windows 7, there will only be 2.58GB of RAM available to you. If you use the 64-bit version (which is installed), you will be able to use 3.84GB.

Ease of use and battery life

Because the Satellite T110 is so thin, it can get uncomfortably warm. It has a vent on the side through which a small fan extracts warm air. The fan is so quiet that at first we thought the T110 was passively cooled.

The screen is useable in bright environments, but we don't like the reflective glossy finish. It has a native resolution of 1366x768, which is a decent size that allows you to line up Windows side by side while you're working (and this is easy using Windows 7's Aero Snap feature).

We found the touchpad to be responsive but not smooth. The mouse pointer stuttered too much as we dragged it across the screen. Sometimes taps on the touchpad weren't recognised and we had to repeat the action, which got annoying.

The notebook's keys are 17.5mm wide, except for some non-alphanumeric keys like the Windows and arrow keys. The slash and apostrophe keys are also slightly smaller, but their size doesn't inhibit touch typing. There are no misplaced keys. The keyboard does bounce slightly, and it this can be a little disconcerting when you type.

The Satellite T110's 6-cell battery lasted 4hr 21min in our rundown test, in which we disable power management, maximise screen brightness and enable the wireless radio while we loop an Xvid-encoded video. This is a good result and you will be able to get more life out of it if you use a power saving scheme and turn down the screen's brightness. It's a much longer result than the Pavilion dv2 (2hr 50min) and the HP Mini 311 (3hr 29min) and even better than many 10in netbooks.

For $999, the Satellite T110 represents good value. It's suitable for anyone who wants notebook that's small and mobile yet more powerful than a netbook. It has good connectivity (including 802.11n wireless networking and Bluetooth), ships with the 32-bit and 64-bit versions of Windows 7, and it's reasonably comfortable to use. Most importantly, it has a long battery life.

The only drawbacks are its touchpad and keyboard, which we think could be a little better, and the glossy screen, which can be annoying. Nevertheless, this is a worthwhile notebook for anyone who travels frequently and can't justify shelling out over $3000 for the ultra-light yet robust Portege R600.