Toshiba Satellite U840 review: A 14in Ultrabook with 8GB of RAM and a hybrid storage solution Toshiba's 14in Ultrabook offers a good mix of light weight, thin design and useful features. It's a good all-round Ultrabook, but it could use a better screen and keyboard, as well as some tweaks to its build quality. It performed decently in our tests, but it comes with lots of pre-installed software that can sometimes get in the way -- be prepared to uninstall some stuff!

The Toshiba Satellite U840 Ultrabook (PSU4RA-00Q00C) is a 14in model that's not as thin and light as the company's 13.3in offering — it weighs 1.7kg and is about 20mm thick with the lid closed. It's a notebook that caters to users who want something a little bigger and perhaps more comfortable to use, but it does have one slight drawback in the area of comfort: its keyboard. If you can get used to its shallow and stiff-feeling keys (as we did), you'll enjoy this model. It's a laptop that provides good overall performance for office work and multimedia tasks, and it offers a good set of connectivity features.

The styling of the Satellite U840 is basic and it doesn't stand out, nor look overly boring — it's definitely not up to the standard of the premium HP Envy 14 Spectre, for example. It feels well made for the most part, although we did notice some slight clicking in the left side of the chassis and sometimes on the touchpad as we navigated, without pressing too hard against it. It is a 'clickpad' type of touchpad, which has the left- and right-click buttons located under the pad, and the whole pad clicks, but the clicking we noticed was not due to this. It didn't happen often though. The hinges that hold the screen could stand to be a little stronger; on some occasions, the screen tilted back a little on its own as we lifted the laptop.

The screen itself is adequate for general-purpose use, such as browsing the Web and working on documents, but it does have shallow vertical viewing angles that cause colour shift and contrast loss when the screen is not perfectly positioned. It's also a glossy screen that will reflect light and possibly cause grief unless you use the maximum brightness level. It has a glossy bezel around it, which counters the brushed style of the base. The native resolution is 1366x768, which is standard, but we wish it was 1600x900 to make better use of the extra screen size compared to a 13in model.

Like many Ultrabooks, the U840 has a sealed chassis, meaning you can't easily replace the battery or any of the components via access panels. Phillips-head screws hold the base in place, and these are concealed with rubber plugs. Vents are located on the bottom, as well as the rear of the base, and warm air is pushed out by a fan through the rear vent. It doesn't make a lot of noise, even when it's running at full speed when the CPU is under a heavy load. That said, you should expect some slight whirring, even when using the notebook for Web browsing. Despite having a conventional, spinning hard drive and 8GB of RAM, the base didn't get excessively warm during our tests. It got moderately warm at the rear — near the heat sink — when used on an uneven surface such as a lap, so you will have to be mindful of the vents and try not to block them completely (cue awkward sitting positions). 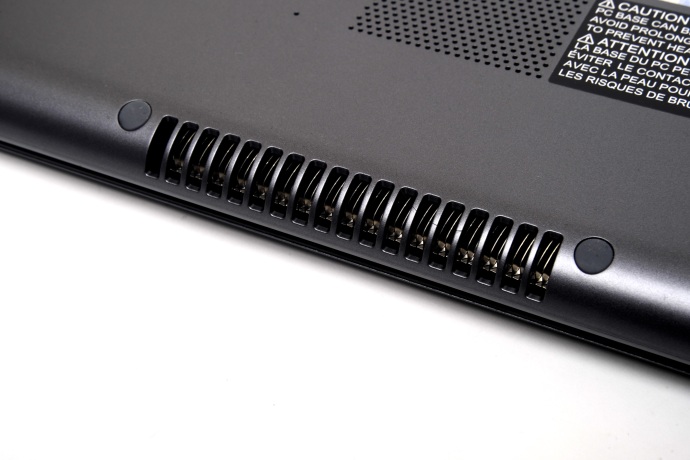 There is a useful array of ports located on the left and right edges of the base, and these include: USB 3.0 (1), USB 2.0 (2), separate microphone and headphone ports, HDMI, 10/100 Ethernet, and you also get an SD card slot. Two speakers are present — one on either side of the chassis — and while they are adequate for casual listening, their quality is not great and the sound separation due to their positioning can sometimes be irritating, depending on how you are sitting.

We got used to the chiclet-style keyboard and found it more comfortable to type on as our review period progressed — this was aided by the large palm rest (which is 95mm deep), too. Initially, the keys felt small (they are 15x12mm) and awkward to press, not to mention shallow and a little resistive, and the central location of the touchpad relative to the base and not the space bar put us off a little. We still think the keys could use more travel and sharper response, but we don't think it's a terrible keyboard at all. 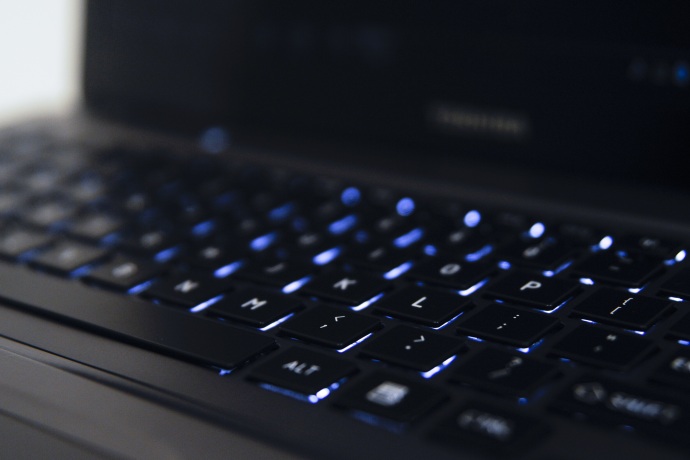 The positioning of the keys is standard, but you do get Page Up, Page Down, Home and End keys to the right of the Enter and Backspace keys, which takes some getting used to; the arrow keys have been given a good amount of space and are easy to feel for. Toshiba has set up the Function keys so that screen brightness, the software Wi-Fi toggle and the media and volume controls are the primary functions. A soft backlight illuminated the keys and it works on a 15sec timer. The light is not affected by the touchpad and will only be illuminated once a key is pressed.

The Synaptics touchpad is 99x62mm in size and it felt smooth and responsive during our tests. Its accuracy was good and it performed two-finger scrolling and three-finger flicks without any hassles. However, we did experience a lot of problems when undertaking right-click drag-and-drop operations; basically, we never succeeded in completing one such operation.

On the inside, Toshiba has created an engine room consisting of an Intel Core i5-2467M CPU, 8GB of DDR3 SDRAM, integrated Intel HD 3000 graphics, and a hybrid storage solution. This storage solution consists of a 320GB, 5400rpm Hitachi hard drive (HTS543232A7A384), and a 16GB SanDisk U100 solid state drive. The system felt responsive during our tests when launching applications and multitasking. A cold boot took 56sec, which is slower than we expected and a consequence of all the extra software that Toshiba has pre-installed on the system, including a version of Clickfree backup software, Splashtop Streamer and Norton Internet Security. The laptop took 4sec to awaken from sleep mode and bring up the Windows 7 Home Premium login screen.

In our Blender 3D rendering test, the system completed our four-thread workload in 60sec, while in the iTunes MP3 encoding test, it recorded 1min 10sec. These results are exactly the same as the HP Envy 14 Spectre, but a dash slower than the HP Folio 13 and Toshiba Satellite Z830 Ultrabooks, which all use the same CPU. Its graphics performance of 4286 in 3Dmark06, is a better showing than most Ultrabooks put up. In our file transfer tests, the hard drive averaged 55.78 megabytes per second (MBps), which is also a good showing, while in CrystalDiskMark it recorded a read rate of 74.89MBps and a write rate of 73.49MBps.

Heavy processing tasks such as video transcoding can be undertaken on this notebook, although it's not really designed for them; in our AutoGordianKnot test, in which we convert a DVD file to a 1.5GB Xvid file, the U840 took 1hr 10min to finish, which isn't too bad. A high-end notebook can do it about 15-20min quicker.

The battery in the Satellite U840 has six cells and it lasted 4hr 4min in our rundown test, in which we disable power management, enable Wi-Fi (an Atheros AR9485WB-EG 802.11n adapter), maximise screen brightness and loop an Xvid-encoded video. It's a time that is not as good as the Spectre, for example, and we were left wishing that it was longer. You can play with Toshiba's Eco utility to get more out of the battery, as well as gauge power usage.

The Satellite U840 is a good Ultrabook that should suit most portable computing needs. It feels reasonably light and well built for the most part, although there are some aspects of it that could use refining, such as stronger hinges, a better screen and more responsive keys, not to mention a Gigabit Ethernet controller instead of a slower 10/100 controller. We like its configuration (except for the lack of Gigabit) and performance, but wish it didn't have so much pre-installed software and, consequently, unexpected pop-ups when performing tasks such as plugging in a USB drive (looking at you, Clickfree). It's a notebook for Web browsing, office productivity and multimedia tasks, that would suit home users and students, and even small business users.