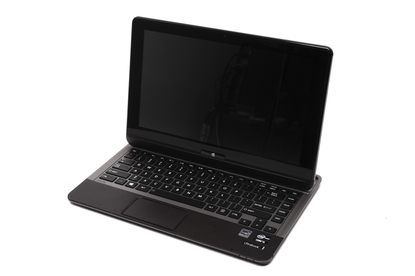 Toshiba's U920T sliding-screen hybrid Ultrabook is a neat concept that takes some getting used to. It's a hybrid that's fun to use as a tablet and it works equally well as a notebook. However, we're not sure how well the screen's mechanism will last over time. The unit has good connectivity features, but it's missing a Full HD screen resolution and dual-band Wi-Fi.

Toshiba has taken the hybrid Ultrabook concept and put it on the rails. Its Satellite U920T (PSUL1A-00S001) is a 12.5in, Windows 8 model with a screen that slides over its keyboard base. You can use it as a tablet or as a laptop, but it's designed primarily with the tablet form factor in mind, and the screen is always exposed in an out-facing position to reinforce this usage model. As such, the U920T is one of the first hybrids we've seen to move away from the folding clamshell design.

Physically, the U920T weighs 1.5kg, feels solidly constructed and it includes a very useful configuration for those of us that require good performance and connectivity features in a tablet device: there is an Intel Core i5-3317U CPU, 4GB of RAM, a 256GB solid state drive (220GB formatted capacity), while the sides have a full-sized HDMI port, an SD card slot and two USB 3.0 ports. Indeed, it's the perfect tablet-style device for those of us that need to be able to plug in large displays, memory cards from a camera, and USB sticks or fast external hard drives. It also has front and rear cameras, built-in Bluetooth and 802.11n Wi-Fi, but it is single-band only via an Intel Centrino Wireless-N 2230 adapter. The other hybrids we've seen so far support dual-band operation. It supports WiDi though (Intel Wireless Display), which is convenient.

To use the U920T as a tablet, all you have to do is switch it on. The power button is located on the left side of the unit, right next to volume controls and an auto-rotation screen lock. There is a physical Windows Home key on the bezel, which allows you to get back to the Start screen (or Desktop) very easily. The screen itself is capacitive and it performed well in our tests. Windows 8-specific gestures worked without fault and we didn't have any problems sliding our fingers across the screen to close, switch or re-arrange apps using the Snap feature. However, when using the touchscreen on the desktop, some small targets, such as the window close, restore and maximise icons, were a little hard to hit. But overall, the touch experience on this screen is a very enjoyable one.

You can use the U920T as a laptop by sliding the screen back towards the rear and then tilting it up. The screen is on a geared track that's visible once you lift the screen, and this, along with the other mechanisms that hold the screen in place and allow it to tilt, create an interesting and unpolished aesthetic. It's rare to see such a raw design with exposed mechanics in a consumer device. That said, it's one of the most mechanical devices on the market, so there is an increased chance of something breaking or getting misaligned over time. Sliding the screen over the keyboard left us with the feeling that one day a key might catch. We were also concerned about debris getting stuck in the track, which could make the screen get stuck halfway.

Basically, while it's a nice design, and one that is definitely interesting, it's also one that leaves you feeling a little nervous about how well it will hold up in the future. One thing we noticed about the mechanism during our tests was that it was a little loose. When the screen was down in tablet mode, it wasn't securely in place. It tended to move back and forth a little on its tracks as we handled the unit. This was quite annoying. We also think that over time the act of sliding the screen and tilting it up will get tiring. Having things plugged in to the rear of the unit will make the tablet-to-laptop transformation inconvenient at times and the transformation is also noisy (and not in an enjoyable way) as the screen traverses the track. Many new hybrids tout the clicking and snapping noises they make as enjoyable features; the U920T makes more of a clickety-clack sound as it moves.

The screen tilts upwards just shy of 90 degrees, which can be frustrating if you're used to constantly adjusting the tilt of your screen forward when resting the laptop on your chest while in bed, for example. The angles of the screen are quite wide though, and we rarely needed to adjust the tilt in order to make the picture look better, it was more the fact that we are used to the tilting action. The same can be said when it came time to shut down the laptop: we constantly tried to close the lid as if it were a clamshell laptop. We think it will take some time to get used to this form factor.

Gorilla Glass protects the screen from scratches, but it also means that it will reflect lights. Luckily, the brightness is high enough to mute most reflections off the Gorilla Glass finish. You don't get a Full HD resolution with the U920T, which means it doesn't compare well against the likes of the Dell XPS 12 convertible Ultrabook, nor against the ASUS Taichi21, for example (the ASUS actually has two Full HD screens). Instead, the Toshiba uses a 1366x768-pixel panel, which is just enough to satisfy the requirements for all of Windows 8's interface features. We would have liked a higher resolution, but we didn't have any problems using the device for multitasking or viewing high-resolution pictures and we think it will be fine for all but the most demanding users.

When used as a regular laptop, the U920T will present you with a regular keyboard that has backlit keys (they work on a timer that detects when you are typing). The keys are shallow though and they don't feel great to type on initially. However, they are adequately soft and we did get used to them after a while. The palm rest is not as wide as it could be due to the screen being mounted about 5cm in from the rear of the base, which means space for this and the touchpad is dramatically reduced. We do really wish the palm rest area had more depth. Typing on this Ultrabook for lengthy periods on our lap was tiring because there just wasn't enough space to properly rest our palms. It's more comfortable to type while resting the Ultrabook on a desk.

The touchpad itself is 85x43mm, and too small considering all the large pads we've seen on other Ultrabooks recently. It does the job though, and it even supports Windows 8's swipe-in-from-the-edges gestures, which have to be enabled in the driver software. They are disabled by default because the pad is so small you might accidentally invoke them while you use the touchpad for regular navigation.

As for performance, the Core i5-3317U CPU put up expected results in our tests. It recorded 49sec in the Blender 3D rendering test, 58sec in the iTunes MP3 encoding test, and 4517 in 3DMark06. The graphics performance is a little low compared to other Toshiba models that we've seen with the same CPU, such as the Satellite Z930 and Satellite U840W Ultrabooks. You won't want to use it to play complex desktop games, but it will be just fine for running games downloaded through the Microsoft store. Overall, it's a hybrid that felt zippy during everyday operations and a lot of this can be attributed to the fast solid state drive, which recorded 163 megabytes per second (MBps) in our file duplication tests, 487MBps in the CrystalDiskMark read test, and 264MBps in the CrystalDiskMark write test. These results aren't as fast as the fastest Ultrabook storage we've seen to date, which can be found in the Acer Aspire S7.

The unit didn't get uncomfortably warm during our tests, either as a tablet or notebook. it has exhaust vents on the spine and there are intake vents on the bottom of the base. It will warm up quicker if you use it on your lap and block these intakes while performing CPU-intensive tasks. A fan is present inside the chassis, and it makes a noticeable whirring sound only when the system is working hard. For the most part it is a quiet system.

Turning the U920T from a tablet to a notebook is not difficult, but it could get tiring over time, and we're not sure how well the mechanics of the design will hold up over prolonged use. That said, the overall user experience that the Satellite U920T provides is a very good one. We particularly liked using the tablet mode to view apps such as Boston Globe's Big Picture, and the Bing Maps, Sports and news apps are also fun to peruse.

However, there are still some quirks that Windows 8 throws up from time to time. In particular, the on-screen keyboard doesn't work too well when in the Desktop. If you place the cursor in a field to type something, you then have to bring up the keyboard manually. It would be nice if it could detect that you wanted to type in a field and came up by itself. Furthermore, when using Firefox and the on-screen keyboard at the same time, the Web browser regularly stalled when we were done with the keyboard. We had to wait for the browser to come back to life. While these aren't issues that are specific to the Toshiba, they are worth pointing out if you are considering this model or any other Windows 8 hybrid model at this time.

If you want to find out more about Windows 8's new features before buying a hybrid laptop like this one, be sure to check out our beginner's guide to Windows 8, which shows you how to get around the Start screen and much more.