A compact, well designed Android tablet with an excellent screen, but way overpriced The Toshiba Tablet AT270 has an excellent display, a good design, comfortable ergonomics and impressive performance. However, at $539 the AT270 is an incredibly tough sell given Google's Nexus 7 provides far superior value. Tough to recommend, barring a massive price drop.

Google's recently unveiled Nexus 7 tablet has thrown a giant spanner into the tablet world. Starting at $249 in Australia, it aims to infiltrate the lower end of the market by providing an affordable device with the latest specifications. Is Toshiba's 7.7in AT270 tablet, retailing for over $500, worth so much more of your hard earned cash?

A great design and a gorgeous touch of Super AMOLED

On paper, the Toshiba Tablet AT270 (called the Excite 7 in other markets) seems like a prime competitor to the Google Nexus 7. It's a much thinner device (7.85mm) compared to the Nexus 7 (10.5mm) and it's also one of the best designed tablets we've reviewed for some time. We particularly love the grippy, aluminium panel on the back. This surface makes the AT270 comfortable to hold and the metallic silver finish contrasts nicely with the glossy back front.

Toshiba deserves plenty of credit for the build quality of the Tablet AT270. The plastic body doesn't creak or rattle, even when you apply some force to the back case. The rounded edges are smooth and don't dig into your fingers regardless of how you hold and use the device. Weighing just 350g, the Toshiba Tablet AT270 provides excellent ergonomics for single-handed use. 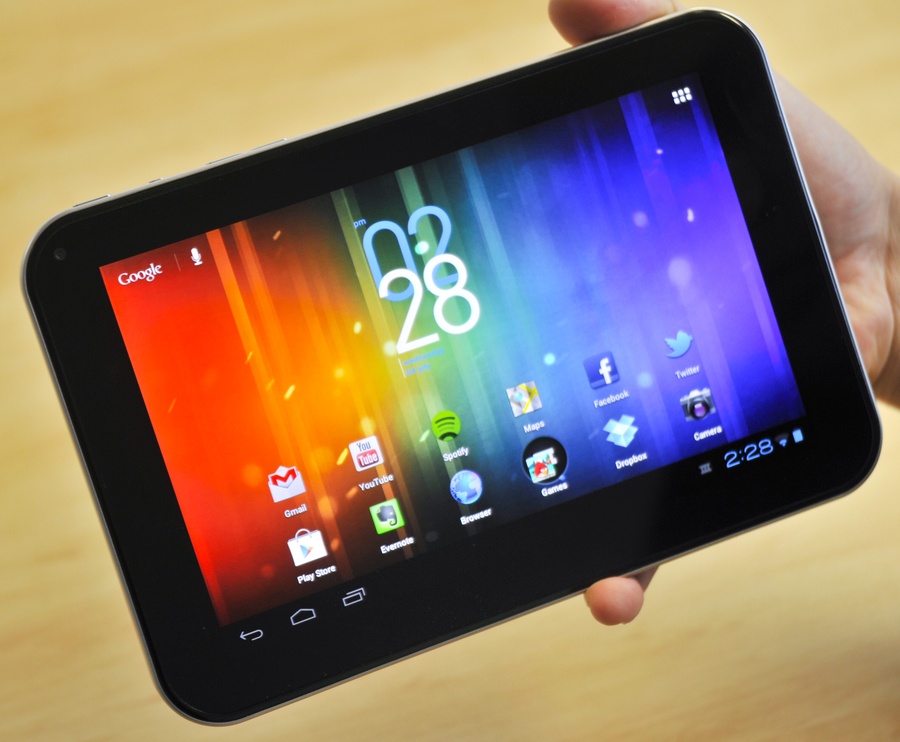 The Toshiba Tablet AT270 is well designed and has excellent ergonomics

Despite the thin body, Toshiba has included plenty of ports on the Tablet AT270. On the right you'll find a standard 3.5mm headphone jack, a micro-USB port for connecting to a computer and a microSD card slot. The power, screen rotation lock key and volume controls on the top all provide good tactility and are comfortable to press, even if they aren't raised much. On the bottom there's two speakers which flank Toshiba's rather enormous proprietary dock connector that charges the device. The connector looks ridiculously large when connected as it's thicker than the tablet itself, perhaps the only blight on an otherwise excellent design.

The Toshiba Tablet AT270's design is complemented by an outstanding screen, a 7.7in super AMOLED Plus panel with an impressive resolution of 1280x800. The display is responsive, has excellent brightness, vivid colour reproduction and is very bright. The 1280x800 resolution may not sound all that special on paper, but when you consider this is the same number of pixels used in most 10in Android tablets, the overall result is an impressively sharp and crisp image. Text isn't as sharp as Apple's new iPad, but it's not vastly inferior, either. A pixel density rating of 196ppi (pixels per inch) leaves the AT270 slightly behind the Nexus 7 (216ppi) but the screen is 0.7in larger in diameter.

The Toshiba Tablet AT270 runs an almost completely stock version of Google's Ice Cream Sandwich Android OS. The user interface is almost entirely void of any software customisation by Toshiba, aside from some video and audio enhancements that don't add much to the overall package. 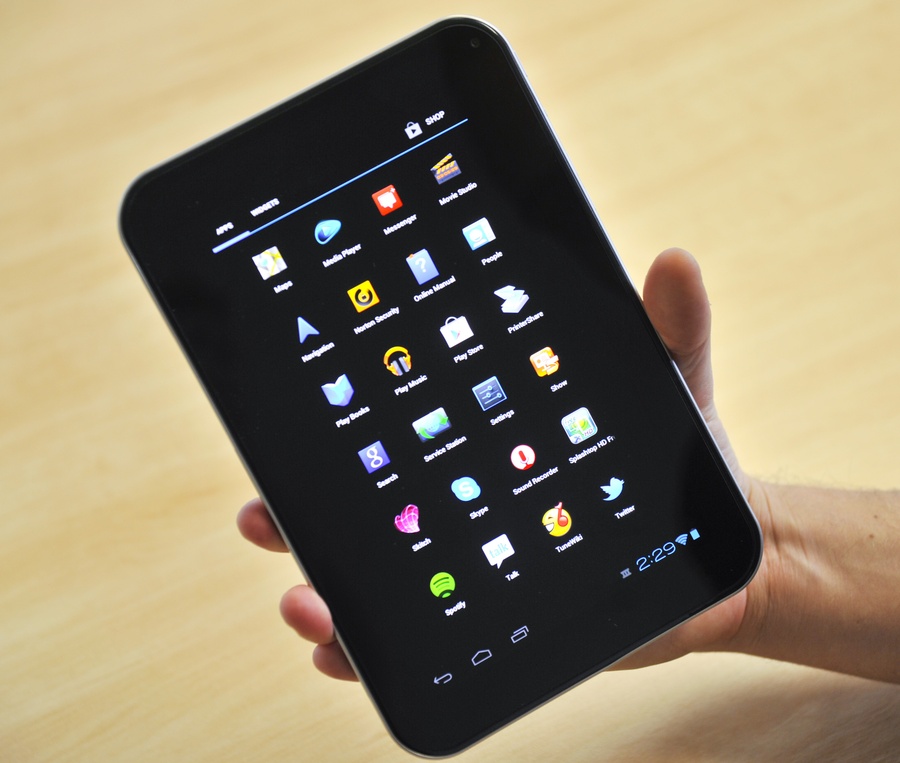 Toshiba pre-loads plenty of apps on the Tablet AT270, though most are underwhelming.

Most of these are underwhelming apps that will quickly be uninstalled, though Toshiba's Media Player is definitely worth a second look. In addition to acting as a player for video and music files, the app also allows you to stream content including photos, podcasts and other files to compatible DLNA devices like televisions. There's also a link in the menu to the AT270's online users manual, which negates the need for a printed manual in the box.

The default ICS software runs largely without issues on the Tablet AT270. Performance is impressive and the only real issues are the same ones we've experienced on almost all Android tablets — the browser often lags when scrolling or zooming in on pages, especially image-heavy sites, the screen takes too long to rotate when you change the orientation and there aren't enough Android apps optimised for a tablet. A good example is the Spotify app, which ridiculously only works in portrait mode because it was designed to be used on a smartphone and not a tablet. However, none of these issues can solely attributed to the AT270 itself and are merely a problem of the Android platform as a whole. 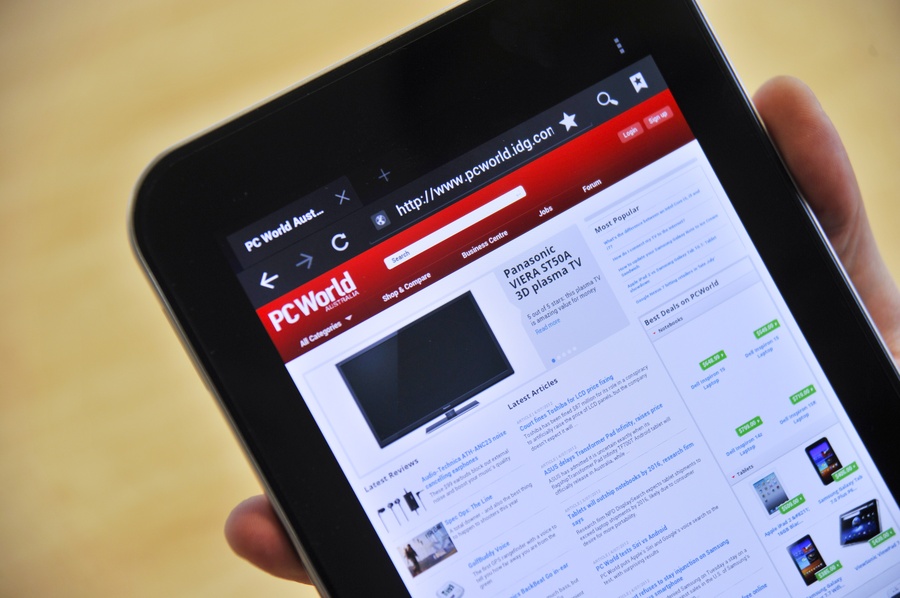 The browser does occasionally lag, but general performance is excellent.

What can be attributed to the Toshiba Tablet AT270 is the fact it excels at gaming, particularly as its small size makes it comfortable to hold for long periods. Graphic intensive titles like FLCommando, GTA III and Shadowgun play with ease. We didn't experience any lag while playing these titles and both the graphics and frame rates are impressive. It's clear the AT270's powerful 1.5GHz quad-core Tegra 3 processor and 1GB of RAM work overtime to deliver these excellent graphics. The result is a good example of what powerful Android tablets are capable of.

We generally have little time for rear cameras on tablets. Google seems to agree, as it ditched a rear camera completely on the Nexus 7. Toshiba may as well have done the same as it has equipped the Tablet AT270 with one of the worst cameras we've seen yet. Almost all of the photos we captured with the AT270 suffered from a lack of focus, lots of image noise and a complete lack of detail. As much as it may sound absurd, the 5-megapixel rear camera hardly takes better quality images than the front-facing 2-megapixel camera. All in all, don't bother taking pictures or recording video with the Tablet AT270.

As the above image shows, the cameras on the Toshiba Tablet AT270 are best described as abysmal.

Toshiba includes a software based SRS sound enhancer on the Tablet AT270 but it doesn't have too much of an effect on the speakers, which lack volume and sound muddled. There's a wide range of audio settings available to tweak including wide surround, volume boost, voice clarity enhancement and an automatic volume adjustment but all are best suited to listening through headphones rather than the speakers.

Two other features of the Toshiba Tablet AT270 make it well worth considering. The 16GB of internal memory can be expanded with a microSD card slot, making it far more flexible than the Nexus 7. The Toshiba Tablet AT270 also boasts impressive battery life, lasting for almost 9 hours during our tests. The lack of 3G connectivity obviously helps it preserve precious juice, but it's clear the AT270 should easily get you through two days of use.

All in all, the Toshiba Tablet AT270 is a very good Android tablet, but it's ridiculously overpriced when you start looking at competing models, particularly Google's excellent-value Nexus 7. The AT270 may have a rear-facing camera and removable storage, both lacking on the Nexus 7, but neither feature is worth such an extra outlay.

The Toshiba Tablet AT270 is available now through major Australian retailers for $539.