Toshiba Tablet AT300 review: An improvement on previous efforts, but a little overpriced The Toshiba Tablet AT300 is a definite improvement over the company's previous Android devices, particularly thanks to a thin and light design. However, compared to rival tablets the AT300 is slightly overpriced given that it offers little that sets it apart from competitors.

Toshiba's previous tablets haven't exactly been well received, with most of them considered ugly, bulky and largely uncompetitive against rival devices. The Tablet AT300, known as the Excite 10 in other markets, aims to change that with a slim design and a look and feel that's consistent with the company's 7.7 and 13in models. Although the Tablet AT300 is an improvement on Toshiba's previous efforts, it is overpriced and ultimately offers little that sets it apart from competitors.

Large but thin and aluminium is in

On first glance, the Toshiba Tablet AT300 is a relatively impressive looking device. It doesn't stray too much from the norm when it comes to form factor, but Toshiba appears to have the basics right. For starters, it's a much thinner device (8.93mm) to most other 10in tablets on the market, even measuring thinner than Apple's new iPad. In addition to its slim frame, the Tablet AT300 weighs just 599g. It feels comfortable to hold in either portrait or landscape orientation despite its large footprint.

Despite its large footprint, the Toshiba Tablet AT300 feels comfortable to hold in either portrait or landscape orientation.

The Tablet AT300 shares much of its design elements with the company's 7.7in (AT270) and 13in (AT330) tablets. We particularly like the grippy, aluminium panel on the back. This surface, filled with tiny, indented circles, means the AT330 won't easily slip out of your grasp. The metallic silver finish also contrasts nicely with the glossy back front, though the latter is a fingerprint magnet and is quite reflective.

Sadly, the build quality of the Toshiba Tablet AT300 can't match that of the impressive AT270. The bezel surrounding the display on our review unit clearly creaked when any force was applied and the edges physically depress, too. There's also a thin gap between the edge of the plastic in this area which easily attracts dust and particles after just a few days of use. 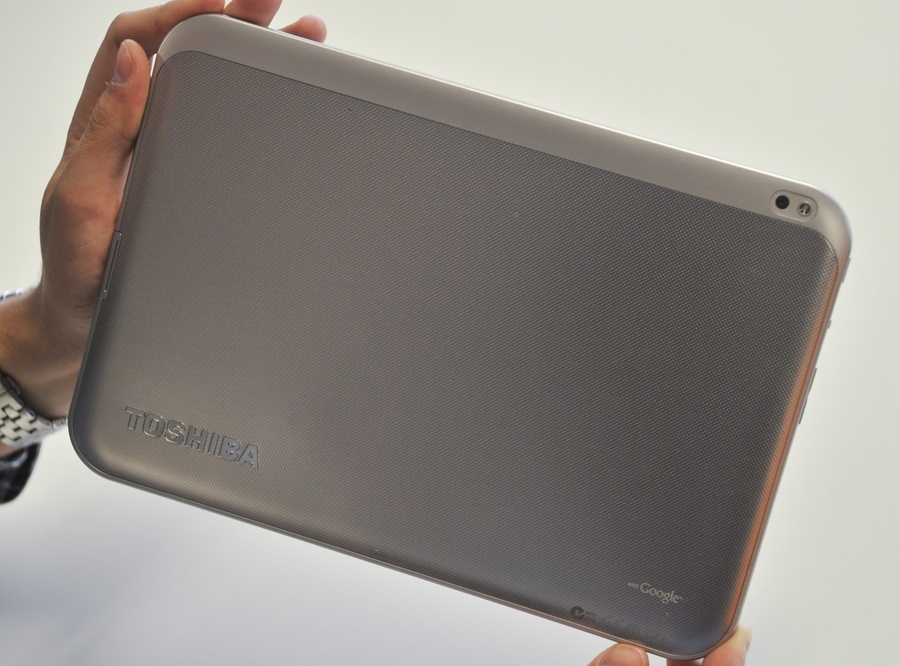 The grippy, aluminium surface on the back of the Toshiba Tablet AT300 is filled with tiny, indented circles.

Despite the thin body and the less than stellar build quality, Toshiba has at least included plenty of ports on the Tablet AT300. On the right you'll find a standard 3.5mm headphone jack, a micro-USB port for connecting to a computer, a micro-HDMI port for connecting to a television or projector and a full-sized SD card slot. The latter is an interesting but welcomed feature, as most other Android tablets tend to use the smaller microSD card slot for expandable memory.

On the left side of the Tablet AT300 is a power/lock screen button, a screen rotation lock slider and volume controls. These all provide good tactility and are comfortable to press, even though they aren't raised too much from the edge. On the bottom of the tablet are two speakers which flank Toshiba's enormous proprietary dock connector that charges the device. The connector looks ridiculously large when connected as it's thicker than the tablet itself. The Tablet AT300 can only be charged using this connector, not through the micro-USB port. The upside to this connector is that it charges the AT300 in around an hour and a half, so it's significantly faster than micro-USB charging.

Toshiba has at least included plenty of ports on the Tablet AT300, including a full size SD card slot and a HDMI-out port.

The Toshiba Tablet AT300 has a 10.1in LED-backlit touchscreen with a resolution of 1280x800. The display is bright, clear and responsive, but it lacks the vivid colours and striking brightness that we've come to expect from AMOLED screens. It also displays dimmer blacks than many rival devices.

The 1280x800 resolution is rather standard for a tablet of this size, leaving the AT300 with a pixel density rating of 149ppi (pixels per inch). This is significantly less than Apple's new iPad (264ppi) and the upcoming pair of the Acer Iconia Tab A700 (224ppi) and ASUS Transformer Pad Infinity (224ppi). Text is certainly readable in apps like Pocket and Flipboard, but if you look closely you'll notice plenty of visible aberrations on the edges of letters. 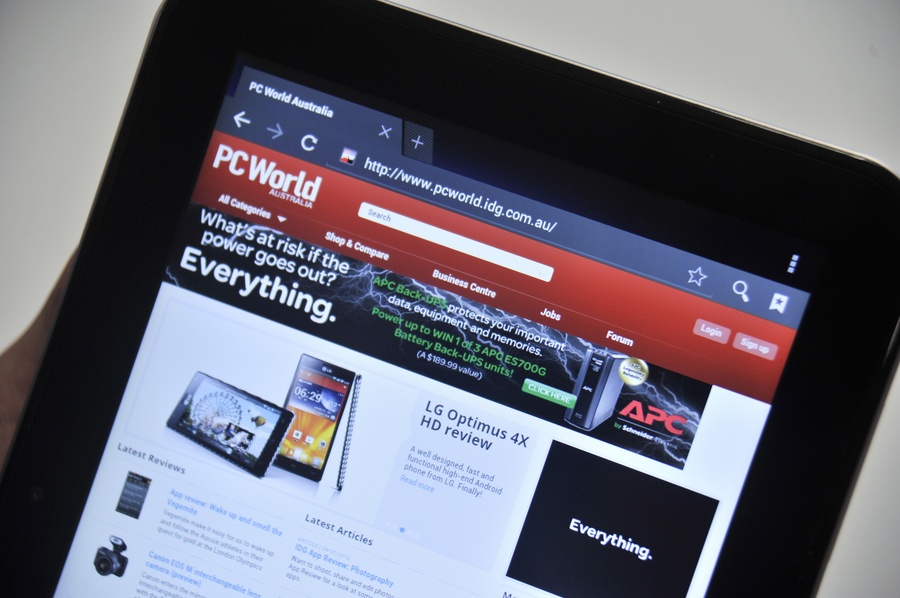 Text is certainly readable in apps like the default Web browser, but you'll notice plenty of visible aberrations on the edges of letters.

There are a wealth of included apps on the Toshiba Tablet AT300 that normally wouldn't come with Ice Cream Sandwich.

The Toshiba Tablet AT300 runs an almost completely stock version of Google's Ice Cream Sandwich Android OS. This user interface is almost entirely void of any software customisation by Toshiba, aside from some video and audio enhancements that although work well, don't add a significant deal to the overall package.

There are a wealth of included apps on the Toshiba Tablet AT300 that normally wouldn't come with Ice Cream Sandwich. These include Amazon Kindle, the ThinkFree Office Suite, a File Manager, the rather useless WildTangent Games app store, Norton Security, the PrinterShare app, Toshiba's Service Station app for software updates, the Skitch drawing app, a sound recorder, the Splashtop remote desktop app and the TuneWiki social media player. 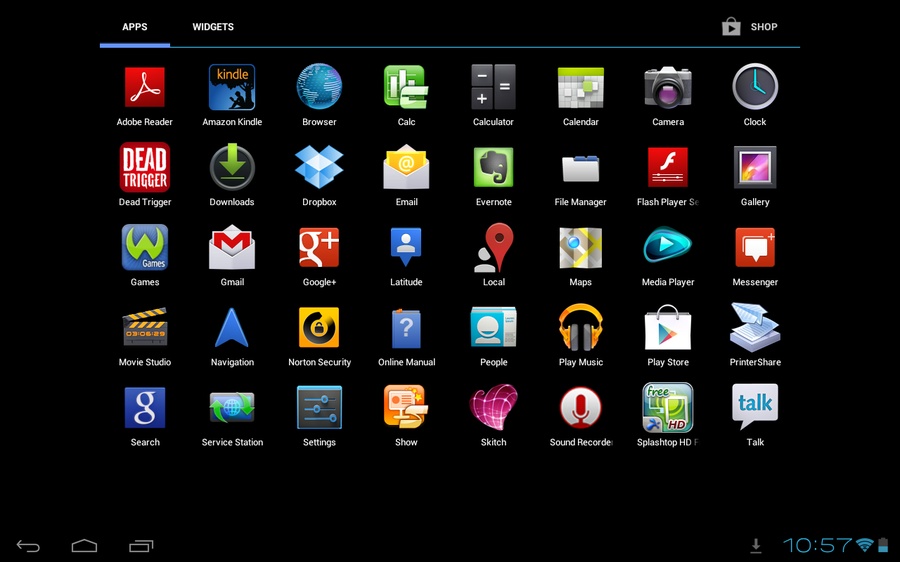 Toshiba pre-loads plenty of apps on the Tablet AT300, though most are underwhelming.

Most of these are underwhelming apps that you'll likely remove, though Toshiba's Media Player is definitely worth a second look. In addition to acting as a player for video and music files and a photo viewer, the app also allows you to stream multimedia content to compatible DLNA devices like televisions.

The default ICS software runs largely without issues on the Tablet AT300. Performance is relatively impressive, though we found the overall user experience wasn't as smooth as the smaller AT270 model. We experienced some occasional lag when attempting basic tasks, like changing settings, scrolling through widget-heavy home screens. None of this slowdown was a consistent problem, but the AT300 does feel less snappy than the excellent AT270.

Most of Android's common issues remain, though these are issues with the platform itself rather than the Tablet AT300 hardware. The browser often lags when scrolling or zooming in on pages, especially image-heavy sites. The screen takes too long to rotate when you change the orientation. Not to mention Android's biggest issue as a tablet platform, the fact that there aren't enough Android apps optimised for the larger screen size. A good example is the Spotify app, which ridiculously only works in portrait mode because it was designed to be used on a smartphone and not a tablet. Apps like Facebook, Twitter and Dropbox are other examples of smartphone apps simply blown up to fit the AT300's larger screen and the end result does have a negative impact on the overall user experience. 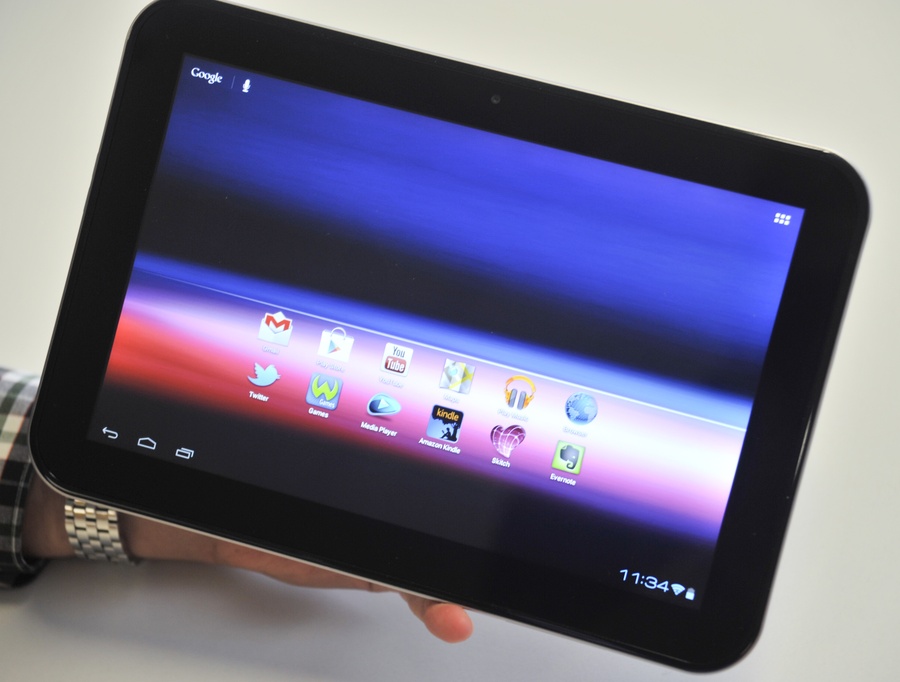 There's not enough Android apps optimised for the large screen size of the AT300.

Despite some performance quirks, the Toshiba Tablet AT300 excels at gaming. Graphic intensive titles like Dead Trigger, GTA III and Shadowgun play with ease. We didn't experience any lag while playing these titles and both the graphics and frame rates are impressive.

The Toshiba Tablet AT300 has one of the worst cameras we've ever seen on a tablet.

We generally have little time for rear cameras on tablets and it appears Toshiba thinks the same. That's because it has equipped the Tablet AT300 with one of the worst cameras we've seen yet. Almost all of the photos we captured with the AT300 suffered from a lack of focus, lots of image noise and a complete lack of detail. In fact, the 5-megapixel rear camera hardly takes better quality images than the front-facing 2-megapixel camera, though at least the latter is useful for video call apps like Skype and Tango. Any photos or video captured with the camera can be stored on the AT300's 16GB of internal memory, or the SD card (not included). 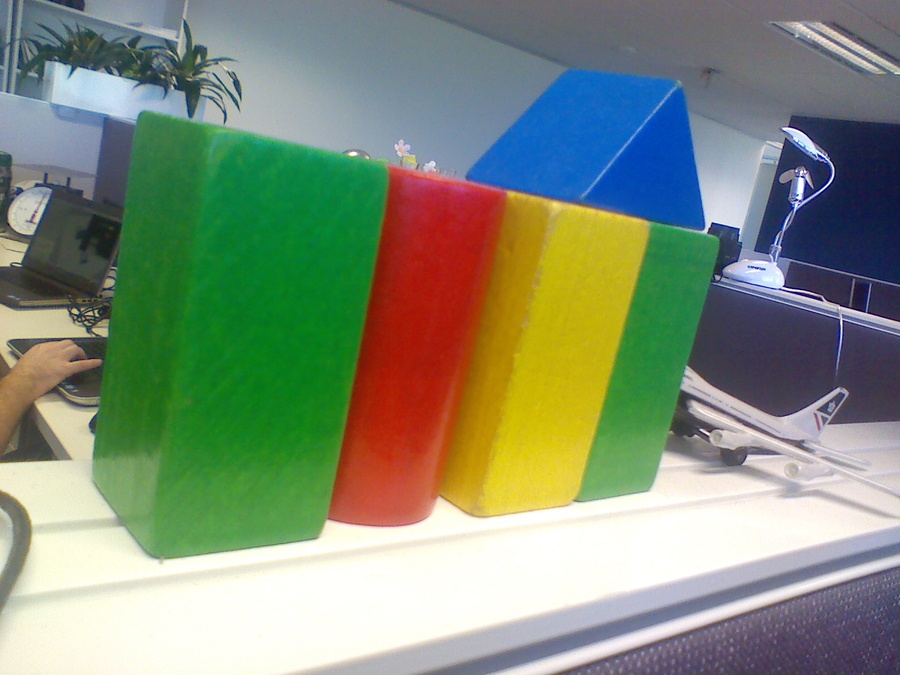 The rear camera on the Toshiba Tablet AT300 is best described as abysmal, as the above image demonstrates.

Toshiba includes a software based SRS sound enhancer on the Tablet AT300 but unlike the AT270, it significantly boosts the volume of the larger speakers at the bottom of the device. There's a wide range of audio settings available to tweak including wide surround, volume boost, voice clarity enhancement and an automatic volume adjustment. There's also a video enhancement setting, but we didn't notice too much of a difference when it was switched on.

The Toshiba Tablet AT300 has reasonable but not outstanding battery life. In our tests, it lasted for around seven hours before needing a recharge, less than the smaller AT270 and a couple of hours less than the new iPad. The lack of built-in 3G connectivity helps preserve some battery life, while if experimentation with the balanced power setting may see you squeeze out some extra juice out of the non-removable battery.

Toshiba's enormous proprietary dock connector at the bottom of the AT300 charges the device.

The Toshiba Tablet AT300 is available now through major Australian retailers for $539.