The TP-Link TL-PS310U print server is useful if you want to access a multifunction device or USB storage device over your network, but it's not overly useful for sharing these devices with many users.

TP-Link's tiny TL-PS310U print server lets you share a multifunction device or a USB drive over your network. It's useful if you don't want to share files and printer resources through a PC, and it's quite easy to set up and use.

It measures only 55x51mm (its power adapter is bigger) and has a USB port on one end and a 10/100 Ethernet port on the other. The TP-Link TL-PS310U will work with USB keys as well as USB hard drives, memory card readers and printers. Because the server is so small, it can just 'hang' behind your printer. However, it's too light to just sit solidly on a desk when you want to use it to plug in different storage devices.

We used the TL-PS310U with various USB keys and a USB hard drive, and it worked well. In order to see attached USB devices, you have to first install the supplied software: MFP and Storage Server. This comes on an 8cm mini CD and includes drivers for TP-Link's other print servers, so you have to select the right model from the list. Once it's installed, you can then use it to connect to an attached device. When you launch MFP and Storage Server the attached device will be shown; select it and then click on the 'connect' button. 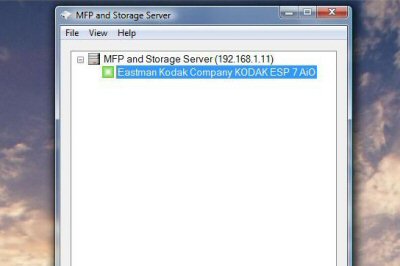 The supplied MFP and Storage Server utility will detect the USB device you have attached and allow you to connect to it.

If you've attached a USB key or hard drive, this will then show up in My Computer under the removable storage header and you will be easily able to transfer files to and from the device. If you've attached a multifunction device, then you will be prompted to install its device drivers. This is when you have to put in your vendor-supplied driver CD, or download the latest drivers for your device from the manufacturer's Web site. When installing the drivers, you have to specify that the multifunction device is connected via Wi-Fi so that it will be detected. Once the drivers have been installed, you will then be able to use the multifunction device as if it was attached directly to your computer.

You will be able to print, send scans from the multifunction device to your computer, and browse memory cards from your computer (if the MFD has any memory card slots). However, not all multifunction devices are guaranteed to work, so check the compatibility list on TP Link's Web site to see if your model is listed. Even though the Kodak ESP 7 we used is not listed, it worked perfectly in our tests. 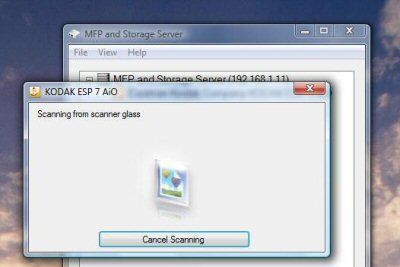 We tested the TL-PS310U with a Kodak ESP 7 multifunction device, and it worked perfectly. Here you can see that it sent a scan to our notebook.

We tried out a variety of USB keys and hard drives, and all of them were recognised. Transferring files off a USB key will be a slow process: we achieved and average rate of 323 kilobytes per second when using an 802.11n WiFi connection from our laptop to our router. Standard-definition movies streamed smoothly off a USB key, but some buffering was evident.

If you're thinking "so far so good, this little thing is quite useful", there are a few caveats you need to be aware of. The server itself doesn't have any built-in configuration options, which means that you can't make a drive read-only or assign users. It's very much a personal device to be used only by you and maybe a couple of other people in the same household. Each person who wants to use the server must have the software installed on their computer. However, only one person at a time can use the server. Attempting to connect to the server while someone else is using it will bring up a dialogue box asking you if you want to notify the user of your request. This means that the TP-Link TL-PS310U isn't ideal for true file or printer sharing.

That said, the TL-PS310U does have a place in a household environment, where it's unlikely that more than one user will need to use the server at the same time. It's easy to set up and use, and it didn't give us any problems. Some routers have storage or print server functions built in (such as Belkin's N+ Wireless Storage Router). These functions work in the same way as the TL-PS310U, in so far as they need client software to be installed. The TL-PS310U is a little better: it offers better performance and it supports either storage or multifunction devices. Whether it's worth the asking price is another story. The alternative is to just share your files and multifunction device through a PC on your network.