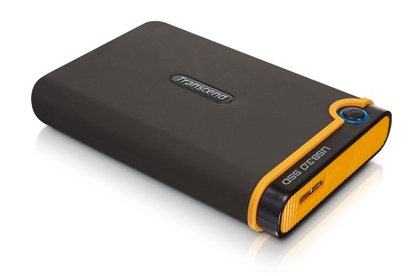 Transcend's SSD18C3 is a USB 3.0 solid state drive that's small and attractive. However, it doesn't provide much of a speed upgrade over a traditional USB 3.0 hard drive and with a cost per gigabyte over $5, it's also very expensive.

Transcend's SSD18C3 is a portable, 1.8in solid state drive that runs on USB 3.0. It's small and very mobile and it most likely won't make your data unreadable if you accidentally drop it. These are the best traits of this drive: it's more durable than a conventional hard drive and it's very small. However, it doesn't have as big a capacity as a conventional drive (64GB), its performance isn't anything special, and it's expensive.

The SSD18C3 has a retail price of $299 and a formatted Windows capacity of 59.6GB, which equates to a cost per gigabyte of $5.01. To put this in perspective, the going retail price for a 16GB USB flash drive on the Australian market is around $22, or close to $1.30 per gigabyte, and a typical 500GB USB 3.0 portable hard drive is around 18 cents per gigabyte. At this sort of value, you have to really make sure that you want the Transcend and that you'll put it to good use.

Physically, it's a nice drive. It has a silicone exterior that feels soft and it won't collect fingerprints. If you put enough pressure on the case, it will bend, but it's not flimsy. There is a backup button on the drive, which works with the supplied backup software, and there is a dual-colour status LED. The LED flashes blue when you plug it in to a USB 3.0 port, and orange if you plug it in to a USB 2.0 port, so you will easily know if you've plugged the drive into the right port or not. Transcend ships the drive with a dual-headed USB 3.0 cable -- both heads of the cable can be plugged into a PC in the event that the single USB 3.0 port isn't able to supply the full 5V of power that the drive requires.

Because it's not a large capacity drive, it's not ideal for backing up a large collection of video files but it might suffice for music and photo files (it will hold over 3000 RAW files). That's one of the knocks on this drive though: a 59GB formatted capacity just doesn't go that far these days.

The drive doesn't ship with any encryption software, so you'll have to find your own way to secure data depending on the version of Windows you are running so it's not a good straight-out-of-the-box solution for transporting sensitive documents to and from the office; it only comes with very basic backup software, which works in conjunction with the button on the drive itself. Once you have told the software which folders you want to backup, a simple press of the button will start the process. It's quite easy to keep updating your backup by pressing this button, but the software's dialogue box will remain in the foreground until the backup is complete, which is very annoying.

In our own real-world benchmarks, the drive wasn't as fast as we expected it to be. We tested the drive by connecting it to a USB 3.0-capable laptop running an 80GB Intel SSDMAEMC080G2 SSD drive. It read 3GB worth of small files (1MB) at a rate of 85.71MBps and wrote them at 40MBps; it read 19.4GB of large files (between 600MB and 1.4GB) at 83.98MBps and wrote them at 81.17MBps. We tested after intalling the optional driver that's supplied with the Transcend drive.

What all these numbers show us is that in a real-world scenario, the 64GB Transcend SSD isn't super fast and it won't blow your mind. What it has going for it are two things: a small size and better data reliability due to it having no moving parts that can break if it's dropped. Unless you specifically want a drive that's smaller and more durable than a standard, portable USB 3.0 hard drive, and you don't mind paying the price premium for flash storage, then you are better off going for a standard hard drive.