This secuirty suite 2009 fails at the most basic task of detecting and blocking malicious software. 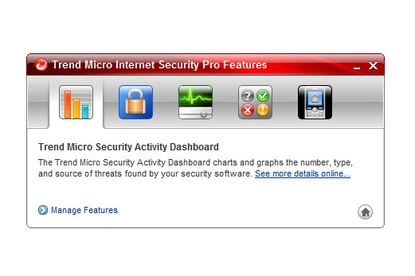 Trend Micro Internet Security Pro 2009 fails at the most basic task of detecting and blocking malicious software. Not recommended.

Trend Micro Internet Security Pro 2009 fails badly at any security suite's most important task: identifying malware before it can attack your PC.Its dismal 69.3 percent detection rate was a full 20 percentage points behind the next worst competitor of the 2009 security suites.

In AV-Test.org's tests, which put each suite up against a huge array of bots, password stealers, and other malware, top performers tagged about 99 percent of the 654,914 samples - but Trend Micro Internet Security Pro 2009 let three out of every 10 pieces of malicious software go by untouched. That just doesn't cut it for security software.

The company says that it emphasises proactive protection that attempts to block threats before they can try installing malware (and before the suite would have to recognise it). Trend Micro Internet Security Pro 2009 uses its own web crawlers, download tests, and user reports to maintain a database of malicious websites, and will block those sites from loading on your PC. It's a valid approach - one that could well supplement scanning for malware on your PC - but it can't yet replace that core detection task.

Trend Micro Internet Security Pro 2009 did shine when tasked with cleaning up an existing infection. It removed all the files from nine out of 10 malware infections, a performance that only BitDefender matched. It was almost as good in dealing with Registry changes, placing second in that test.

Trend Micro Internet Security Pro 2009 offers a few interesting features, such as a scan for missing Windows patches that assigns a risk level for each one. You'll also get a useful Wi-Fi advisor button in a browser toolbar that can warn you if your wireless network lacks encryption - a smart tool placed in a good location.

Trend Micro Internet Security Pro 2009 also did well with its user interface, and clearly took time to provide good descriptions for features and options. Right away we noticed the use of plain English throughout the program.

But the company went too far with its desire to simplify, as we saw no pop-ups or warnings when it blocked our attempted Zango-adware download. We had to dig into the program logs to find out what was going on. It's good to help people make informed decisions to protect their computer, but it's also important to at least give users an idea that something we just tried to do was potentially harmful.

Without an alert, a user might think that their browser simply had a problem, and they might then try installing the dangerous software through another browser - or even worse, on another PC. You can change the default setting to display warnings when your PC encounters viruses or spyware, but you shouldn't have to.