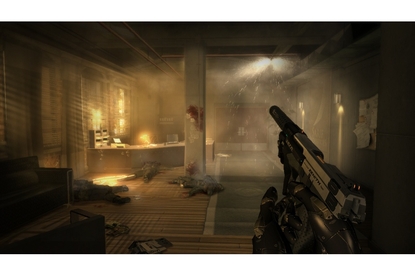 Deus Ex: Human Revolution is a successful prequel to the brilliant original game. The story can be a little uninspiring at times and the game world occasionally tends towards lifelessness, but the intrigue of the plot is compelling.

There are some minor spoilers in this review, but nothing game-changing. Please read on!

The original Deus Ex, quite simply, set a lofty benchmark for FPS/RPG hybrids. It is incredible that after 11 years, its immersive storytelling still ranks top of the class. Meeting the grade was a failure its sequel, Deus Ex: Invisible War, in 2003, managed in spectacular fashion. The emphasis of returning the series to its Game Of The Year heyday, then, was a pressure the creators of Deus Ex: Human Revolution felt only too well.

Previews, trailers and general hype for Deus Ex: Human Revolution excited hardcore fans and casual gamers alike; with all the teaser cutscenes showing off the neo-Renaissance cyber-punk feel of the game, I relished the possibility that Human Revolution was returning home to the atmospheric lived-in levels of the 2001 Deus Ex. Could its unique visual style complement a crisp tale of betrayal and intrigue? 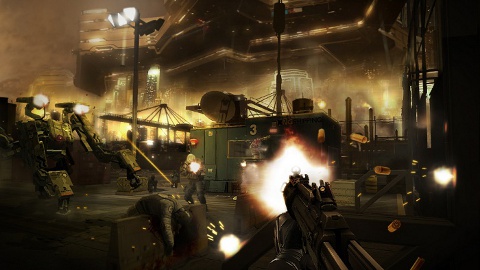 In starting up the game, the first thing you notice is the smoothness of the controls (Although they can be criticised for being too 'consoley', with an interface clearly set out for a four-button controller - Ed.). The core gameplay is more fun than awkward, and any complaints about Ubisoft's decision to adopt a regenerative healing system in the game don’t stand up. In fact, much of the console-phobic hard core fans were fretting about (icons for using ladders, a simplified inventory, and so on) don’t get in the way of the gameplay at all.

Deus Ex: Human Revolution's free-form gameplay is certainly its major strength. It is fun, intuitive and maintains (if not surpasses) the ‘open linearity’ of the original. The visuals and audio of the game are decent, if not astounding. The smoke and sparks of the cities and factories manage to contribute to an atmosphere that has clearly been painstakingly constructed.