Action RPG fans will enjoy this game but it's not worth paying full price. Hack and Slash fans don’t really have another choice right now. It’s not a broken game, and plays quite well for what it is, but Dungeon Hunter Alliance is by far the laziest port I’ve ever seen.

The PlayStation Vita launched with a really good lineup of games; everything from the blockbuster, Uncharted: Golden Abyss, down to the quality bite-sized niche game, Escape Plan. But the RPG category seems grossly under-represented. The only game that really fits the genre is Ubisoft’s port of the Gameloft game, Dungeon Hunter Alliance.

Let’s get the real problem with this game out of the way first: on the PS Vita it’s a full priced game. This exact same game was released on the PSN for PS3 download for half the price last year, and the iPad/ iPhone game can be bought for peanuts.

It’s a bit unfortunate that the price of the game has become the main talking point (and a subject of massive criticism) because while Dungeon Hunter is about as far from a brilliant game as imaginable, it succeeds at being a bit of very derivative fun.

If you’ve played Diablo or any of its clones then you know exactly what you’re getting into – dungeon after dungeon and neverending swarms of enemies. There’s little plot worth caring about, but there’s a lot of loot to grab. There’s a shortcut button for potions, and the Vita’s face buttons allow for a few hotkeyed skills.

There are three generic heroes to choose between – a warrior, a mage and a rogue, and they all behave exactly as you’d expect. Levelling happens quickly, and that’s just as well, as the levels themselves are generic and quite bland, but work on a technical level for running through them. The action is responsive and there’s a real thrill to building up your hero to become a superhero. 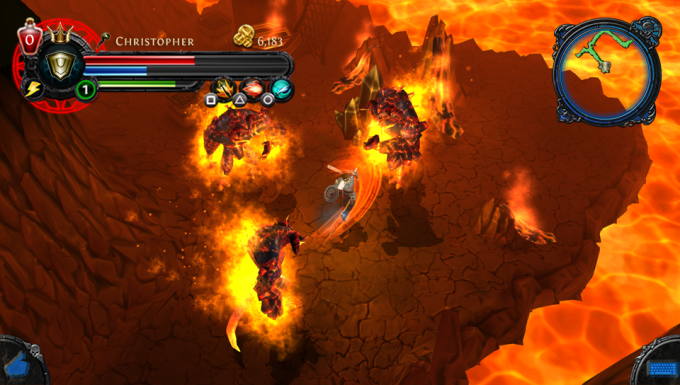 There’s also a multiplayer mode, and with this kind of game, it’s mandatory that it works well. Thankfully Gameloft might not be especially creative, but it is usually technically proficient. The four player multiplayer game works well, assuming you can find someone else to play with.

Dungeon Hunter doesn’t really take advantage of the PS Vita’s features, but that’s not surprising since this isn’t a PS Vita game. It’s also one of the weakest games in terms of visual impact; there’s better action RPGs on the PSP.

But, all up, if you see this game going cheap, and you’re into RPGs enough to get a kick out of competent examples of the genre, you’re going to enjoy this one. Just don’t pay full price for it.