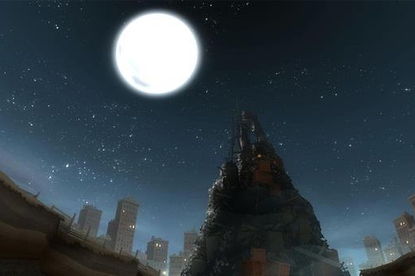 Rabbids Go Home is a very special game, and when I say special, I mean special like that kid in your second grade class who frequently took his pants off and was always eating paste. It's a game that, much like the creatures who star in it, is very difficult to characterise, but it is that uniqueness that allows for this mascot-based platformer to feel totally distinctive.

The game begins with the assertion that these creatures are natives of the moon, and it is their goal, and your job, to return them to that massive, round lunar rock. It seems more plausible that their origin is a result of a night of passion between Jerry Lewis and a slow-witted rabbit; however, had Ubisoft built the game's plot around animal-man love, they may have found it tough to acquire that E for Everyone game rating (but god, do I wish they'd tried). So to put it simply, this game is absurd, its humor is silly, and its slapstick foibles will certainly leave you laughing and entertained, but possibly for only a limited time.

Your part in this quest to return that troupe of insane creatures to the moon is simple: pilot a shopping cart filled with two daft Rabbids. As you steer these Rabbids through various locales, you will be tasked with the job of collecting junk (a la Katamari Damacy), with the objective being to then stack the collected junk into a massive tower that reaches the moon. It's a simple premise, and it's accompanied by simple gameplay. Fortunately, the game is packed with such unconventional personality that it makes the extreme simplicity not feel like a detriment at all. In fact, the gameplay's minimalism comes off as a conscious choice to better force players to push through and absorb the wacky settings and scenarios. This means that as a player, you should get accustomed to saying "WTF?" as a smile stretches across your face.

With that said, the game can only coast for so long on the merits of its unconventional tone and personality. The simplicity of the gameplay does start to wear thin, especially in the middle of the game when players begin to tire of the drawn-out ease and unchallenging difficulty. However, once the adversity begins to increase, the game again becomes much more engaging. And if players are able to overcome the slightly tedious early levels (which probably could have been combined into one tutorial level), they will be later treated to more dynamic stages and some fun gameplay variation, all of which correspond with and complement the game's absurd and satirical tone.

And that's really the only complaint one can levy against Rabbids Go Home. The game looks great, and while the graphics aren't as detailed as say, a PS3 or 360 title, it definitely feels like a stylistic choice; if or when the game does appear on those systems, I doubt the aesthetics would change. The controls are tight and responsive, it keeps an incredibly frantic pace (especially towards the end), and the music is totally over the top, but totally in character

Even with the game's strength is its unusual and original tone, players can rest assured that this game is just as accessible as it is odd. Featuring an overdose of quirky charm and a wide range of fun-filled gameplay, gamers who aren't used to playing titles outside of the norm will be remiss if they don't give Rabbids Go Home a chance.