Shaun White Skateboarding for Xbox 360, PC, Nintendo Wii and PS3 had potential to be a great game. Unfortunately, it isn't. 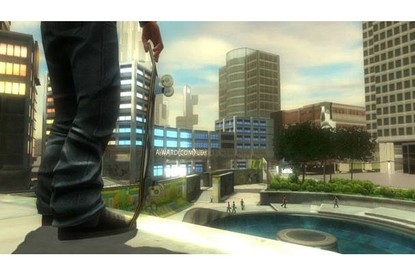 Despite its potential, Shaun White's first foray into skateboarding is hampered by archaic objectives and forgettable multiplayer.

About halfway through Shaun White Skateboarding, you end up caught in a trap set by the game's oppressive anti-skating government, The Ministry. A chopper stalks you as you grind down the city's skyline to escape. It's fast, tense, and crazy-exciting, but what's unfortunately about this thrilling segment is that it's the only moment of joy I experienced during the twelve hours I spent playing the game.

From a purely conceptual perspective, Shaun White Skateboarding is one of the most exciting skating games in ages, with a bevy of interesting and original ideas underpinning its design. But in terms of actual execution, it misses in nearly every possible way. The game's core gimmick involves transforming and manipulating the environment. The game's villain, The Ministry, keeps the emotionally devoid citizens of the game world oppressed and as plain as the colourless city they occupy. This embarrassing attempt at an Orwellian society doesn't have the best internal logic nor does it go anywhere even remotely as engaging as it thinks it does, but it at least serves as an excuse to bring colour and shape into an otherwise lifeless setting.

Executing tricks near washed-out areas pulls quarter pipes and rails from the ground or walls, and that's basically where the "bring the world to life" aspect of Shaun White ends. The execution is haphazard and lazy, and it limits the personalisation aspect that's advertised on the back of the box. Everything's predetermined, and it isn't until well into the game's second half that you can really explore the city to its fullest.

For the most part, SWS is an extended tutorial for a great game that's way late to the party. You're learning things right up until the end but there's no reason valid reason why everything isn't your disposal from the very beginning. Manipulating the scenery by grinding against gravity was the idea I was looking forward to experiencing the most, but by the time I unlocked the ability to to warp rails into the sky, I was already bored.

Worse, the trick system is as tedious as the career progression, and it also arbitrarily restricts your progress. Rather than exploring your abilities, which is what inspired a genuine sense of accomplishment in EA's Skate, you buy basic flip tricks and grabs with earned experience points. There's no fulfilling discovery here: just an inane progress tree that you unlock after completing objectives. The odd design decisions don't end there. In the latter half of the game, hacking mini-games interrupt your extreme sporting. To open certain areas, you'll hop into a computer to play a barely-modified version of Marble Blast; why anyone thought this made sense in the context of a skateboarding game is beyond me.

The greatest tragedy, though, is the shallow, rudimentary multiplayer. Shaun White Snowboarding featured an open-world multiplayer component that actively encouraged socialising and communal fun; the fact that I could start an air tricks competition on the mountain, and anyone interested could join in was terrific, and this flexibility was the franchise's greatest asset. For Shaun White Skateboarding, Ubisoft dragged the mode behind the shed and blew its brains out, replacing it instead with a shallow shell of its former self. The highlight of the online multiplayer is the timed territory battle. Scoring points to claim an area was a cool addition to Tony Hawk's Pro Skater, but come on...that was 1999.

It's really unfortunate that Shaun White Snowboarding is as disappointing as it is. It's flawed in a way that trumps even its frustrating predecessor, and it lacks the multiplayer to make up for it. It suffers heavily from poor and archaic design decisions, most of which crippled my ambition to complete it at all. Having finished the entirety of Shaun White anyway, I don't feel as if I've completed anything more than a checklist of uninspired objectives. Like Shaun White Snowboarding before it, Ubisoft's flubbed execution of excellent on-paper ideas is a heartbreaking disappointment that barely warrants a weekend rental.