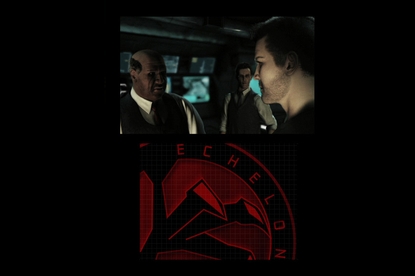 Tom Clancy's Splinter Cell is a reasonable Nintendo 3DS game to buy at launch. The core gameplay is fun; its only real problem is that it's as typical as launch titles get -- a little hurried and rough around the edges, and it fails to take full advantage of the new technology.

Stealthy spy games should be all kinds of awesome on the 3DS. From creeping around in the dark to sniping unaware guards from a mile off, the 3D effect should heighten the immersion greatly. Unfortunately, Tom Clancy's Splinter Cell 3D doesn't quite pull it off. It's a very playable game, but it's also easy to tell that it was rushed to hit the Nintendo 3DS launch date.

The problem is the 3D. Rather than build the game from scratch, Ubisoft appears to have reused existing assets and then '3Ded' them. The result is not unlike comparing Clash of the Titans to Avatar — a cheap attempt to cash-in on the success of a film custom-made for 3D. Where the latter makes great use of camera angles and depth to create a spectacular experience, the former looks like a pop-up book, and this is where Splinter Cell sits. Although it is indeed 3D, it's a layered effect — so it feels like you're looking at flat characters nonetheless.

Immediately this kills the immersion factor, and the video sequences are so grainy as to be truly painful. Unfortunately because of this Splinter Cell is nowhere near as cinematic as it should be, which means that the upcoming Metal Gear Solid suddenly looks that much better.

The gameplay itself is fine. It's heavy on the stealth — it's possible to run out of ammo and need to restart the game from the very first mission if you're not careful to take peons out from behind with your knife.

And, more importantly, the 3DS's buttons are used well. This is a reasonably complex game, with a lot of button inputs, but between the touchscreen and the face buttons Ubisoft has done a truly great job with the controls.

Though missions tend to be more linear than is comfortable for a stealth game (we would prefer a few more routes to tackle objectives), they are well structured, with plenty of opportunities for hiding in shadows, taking out lights, and hacking computers. The enemies are not the brightest sparks around, and if you do inadvertently make them aware of your presence, hiding in the shadows for a few moments will make them forget you are around.

The gadgets you get to play with, while not as cool as James Bond's toys, are still fun, and you'll feel like a secret agent. While its utility is debatable, the optical cam you can use to get a sneak look into a room before you enter the door deserves a special mention, because the camera is controlled by the 3DS' motion sensors.

Other than that and the 3D effect, there's no use of any of the 3DS' other features — no StreetPass, no online play. It's a lonely experience, and while we can't see how those features would work at any rate it's still a little disappointing.

Though Tom Clancy's Splinter Cell works, it's almost certainly going to be forgotten once Metal Gear Solid arrives. It's feels like it was rushed out the door to be ready for the 3DS' launch. Still fun, but flawed.