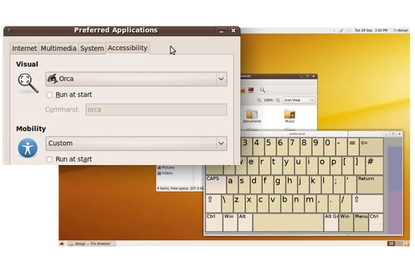 Ubuntu Netbook Remix has a tightly integrated and speedy feel to it, and an easy on the eyes design. We found UNR's quick launch UI not only attractive but so convenient and quick to navigate that we preferred it to the usual desktop interface. Even if your netbook runs Windows XP or 7, you should give Ubuntu Netbook Remix a try.

Although it's based on the popular Linux distro, Ubuntu Netbook Remix (UNR) is not a pruned down version of Ubuntu. Instead, its developers discarded old, legacy code not relevant to netbook systems.

As a result, Ubuntu Netbook Remix is a lightweight OS supposed to run with reduced memory and processor requirements.

Visually, the significant difference from regular Ubuntu is the desktop interface. Access to applications, the web, documents and media are all under a simplified, quick-launch interface - but still sporting the familiar orange-and-brown colour scheme.

The Ubuntu Netbook Remix download is 680MB in size. Installing on to an Asus Eee PC 1005HA took about 15 minutes. We found it very intuitive to navigate UNR's quick-launch user interface - the left side of the main menu organises applications into categories (eg, Accessories, Games and Graphics). Text was large and clear enough to read on a 10.1in screen.

Clicking a category lists icons, large and easy to identify, for the applications in the centre of the launcher menu screen. The right side lists the folders of your personal files (Documents, Music, Pictures, Videos); when you connect a USB flash or hard drive to your netbook, its icon appears under this list.

Even though there were initial compatibility issues with media files, clicking an MP3 file automatically downloaded and installed - after permission was sought - the appropriate proprietary codec. It was a convenient click-and-fix process.

Be aware that there may be some compatibility issues with your particular netbook's hardware. We'd recommend first checking before deciding whether to install.