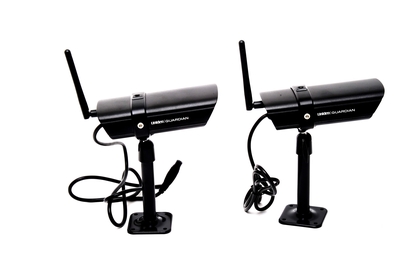 Uniden's Guardian G2770 is a two-camera surveillance kit that doesn't require a lot of know-how to set up and use and it does its intended job well. Everything just works seamlessly straight out of the box, but you will need to some skill with a drill to fix the weatherproof, night-capable cameras to their desired positions. We did have some problems with interference to our Wi-Fi though, and range wasn't always great.

Uniden's Guardian G2720 security kit is an attempt by the company to make home or office surveillance systems as simple as possible to install and use. The kit comprises two wireless cameras, one 7in tablet-style monitor and a base for the tablet. Video can be monitored live on the tablet, over a home network, or over the Internet. You don't even have to know much about networking to get all that working either — it's very much plug-and-play. The quality of the video from the cameras is adequate, though video size is small in order to facilitate recording, and frame rates can vary depending on how good the camera signals are.

Setting up the Uniden Guardian is just a matter of finding appropriate locations and power points for the two cameras and then switching everything on so that they can be found by the base unit. You probably won't want to put the cameras too far from the base unit — when we placed the cameras further than 10m from the base unit, the frame rate ended up falling dramatically. The cameras can be fixed with screws up high on a wall or ceiling if they are to be used for security purposes, but because the cameras have external antennas that screw into the back, you'll need to make sure there is enough space for the antenna above the camera's mounting spot.

The metal stands on the cameras are adjustable; they have ball joints that allow for vertical and horizontal movement. This joint felt a little too soft and loose, and we had to really tighten the butterfly screw hard in order to make the camera not move at all from its desired angle. Each camera will need to be plugged into a wall outlet and the power adapters have about 4m worth of cable to work with. You can place the cameras outdoors as they are weatherproof, and they also have infrared LEDs, which means they can work at night.

As we mentioned earlier, you won't want to position the cameras too far from the main base unit. The specs say they can do 150m, but we found the range to be much less in our test environment at the office. The cameras run in the 2.4GHz frequency spectrum (using frequency-hopping spread spectrum and encryption), and they can, in some instances, cause interference to your wireless network (unless you are running a 5GHz Wi-Fi network). We noticed this after experiencing very slow file transfers (under 500KBps) to one of our laptops while the Uniden Guardian was on, and faster transfers (up to 10MBps) while the unit was off.

Using the Guardian kit isn't hard. The cameras are paired to the base station by default — we didn't have to do anything ourselves to connect them — and you can see video on the screen practically straight away. Up to four cameras are supported and viewable on the 7in screen at once. We were able to view our two cameras with ease and the beauty of the system is that it also allows you to record streams from these cameras directly to the base's SD card (a 4GB card is supplied with the unit).

The 7in tablet unit is very easy to use as the screen supports touch. It's resistive though, which means that sometimes you have to press firmly in order to get something to work, and we found that we did have to press quite hard most of the time (a new firmware was released to remedy this somewhat). You can simply press on each quadrant of video to make it full screen, and you can press on the menu button on the left to enter the system settings — not there are many — and also to enable Internet mode (as long as the base is connected to your local area network via an Ethernet cable).

The quality of the video from the Guardian's cameras was generally good during our tests, but quite small at 320x240 pixels — we couldn't find a way to change this. Because the cameras are designed to have a wide field of view, there is some distortion on straight vertical lines, which manifests as a slight curve. Microphones are also installed, and you can hear audio through the tablet if you tap on the camera to full-screen the view that you want to listen to. Frame rates were smooth as long as we kept the cameras within a good distance of the base unit, but at the outer reaches of the range the frame rate dropped to less than one per second.

Night vision worked well to illuminate an area, but for the purposes of security, unless someone is quite still and close to the camera, it can be hard to make out facial details. Motion detection is supported, and the unit can start recording immediately when it detects movement in a scene. We found it to be a little too sensitive, even when the sensitivity wasn't on high. It would sometimes start recording when there was a change in the shadows or lighting of an area. You can also perform scheduled recordings.

Remote viewing of the security cameras is provided via an app called Uniden Guardian, which is available for both iOS and Android devices from their respective stores. To use this app, you'll need to make sure that the base unit is connected to your home network via Ethernet. You'll then need to venture into the settings to grab the device ID of your unit (which you'll need to enter into the app) and also set a security code. The process was fairly easy and we were able to view the security system on our phone, both over Wi-Fi and 3G.

There is a Web site through which you can also view the Guardian system on a PC (Uniden Video), which requires you to create an account and register your product on that site. However, it also requires an OCX plug-in and only works with Internet Explorer. We could not get it to display video at all during our tests. We used Uniden's email support to try and get a resolution, and while the responses were relatively fast (24-48 hours for each query) and generally helpful, we still couldn't make the plug-in work for us.

All up, if you want some basic surveillance of your home or business through a system that is very easy to install, and which will offer the possibility of remote viewing through a smartphone, then Uniden's Guardian G2720 is worth checking out. You don't really have to know much about technology in order to install and use this kit, and if you're a do-it-yourself type of person, you can have these installed in no time. They are good for outdoor areas, garages, and even inside the home or office, as long as you don't mind the way they will look perched up high in the corners of your rooms. We did experience some interference with our 2.4GHz Wi-Fi networks though, and we found the range of the cameras to be dramatically less than the quoted figure of 150m.