The fastest ultraportable laptop we've tested. Great for anyone wanting portable power without all the bells and whistles.

Venom is a Melbourne based laptop company that’s making waves around the world. Unlike other local systems integrators, venom sells the same-specified laptops internationally so you can buy them anywhere knowing you’re getting the same device. The Blackbook 13 Zero is a straight laptop - there’s no fancy touch-screen or tablet mode (or myriad other things that can go wrong). It’s just a laptop. But there’s more to it than that.

Currently, even the major brands change specs according to what regional product managers think the local markets would prefer and even then, what’s inside can vary according to what deal got struck by the manufacturers. RAM, for instance, could be one cheap brand in one batch and another brand in another. Venom, on the other hand, makes an effort to stick with quality components and detailing exactly what’s inside each laptop when you buy it, so you’re far more likely to get high quality. Venom says they do this because using quality components dramatically cuts down on high support costs. They’ve got a point.

There are some thoughtful component choices. The Blackbook, has two hard disks - a blistering fast Samsung 256GB NVMe SSD for speed and a 2.5-inch mechanical 500GB unit for storage, this keeps the cost down while keeping the speed and capacity up. Other components are high-end too. The Skylake processor is a 2.3GHz i5-6200U and this is flanked by single stick of 8GB DDR3L (low voltage) RAM. However, there’s no discrete Graphics chip - this isn’t a gaming laptop, it’s designed to be a very fast, ultraportable, traditional laptop. The benchmarks bear this out.

The components combined to reach a PC Mark 8 score of 3,074. This makes it one of the fastest laptops we’ve tested (certainly among ultraportables) – better than an i7 Skylake refresh of Dell’s XPS 13 (2,720), Microsoft SurfaceBook (2,744) and HP Spectre x2 (2,385). Much of this is down to the high-quality Samsung MZVPV256 NVMe hard disk. We ran CrystalBench on the system and got these blistering results: 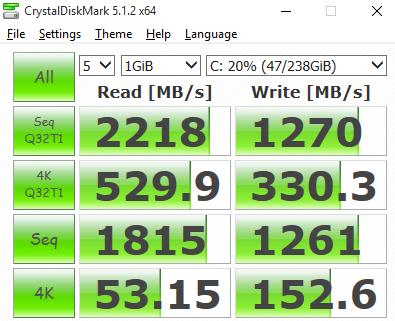 Basically, if you’re wanting a very-portable, high-performance laptop for non-3D applications, this fits the bill.

We ran 3D Mark anyway but the rather tragic score of 628 in Fire Strike, courtesy of the Intel HD Graphics 520 chip, demonstrates that you won’t be doing much beyond casual gaming on this notebook.

The 13.3-inch IPS, (non-reflective) matte, screen has the Full HD resolution of 1920x1080. It gets bright and yet colours remain vibrant (the screen is quoted as supporting a higher-than-usual-for-laptops 72% of the NTSC colour gamut). Viewing angles are all very good, especially vertically where there was very little image degradation.

The stereo speakers are a bit weak though. Sound comes out of two slots on the base - right where many people would rest it on their thighs. This means that the not-very-loud speakers can easily get even more muffled. There’s very little bass to speak of.

The touchpad is responsive and compatible with two-finger gestures (not the full gamut of Windows 10, multi-touch gestures).

Connectivity and other features

On the left-hand side, at the rear, is a USB 2 port and an audio jack. On the right is a standard USB 3, a full-sized HDMI port, a USB 3 Type-C port plus a full-sized SD card slot.

Venom also includes a USB stick which can provide a factory default reset in just 10 minutes.

Read more: Razer Blade Stealth review: This is a feisty ultrabook at an incredibly low price

The metal chassis is very solid – the bulk of it is a unibody. There are screws in the bottom so you can access the innards but there’s no obvious flex or weakness. There’s very little flex in the screen too. At 1.3KG it feels light considering how solid it is. The lid is a bit of a fingerprint magnet, though.

It’s stated as having a full day (eight-hour) battery life but our tests didn’t quite bear this out. Just leaving it on with a low-brightness display saw the battery drain in seven hours flat. It played a Full HD video constantly for five hours and 50 minutes. It ran the intensive PC Mark Battery test for two hours and 50 minutes, so you’ll likely need to keep the power supply with you - but that’s the cost of having power on the move and we’ve certainly seen much worse performers out there.

You can play around with the specifications when ordering a Blackbook but only to a limited degree. Our spec (code: A32903) costs $1799 but if you adjust the CPU, RAM and hard disk configurations you can vary the cost from $1499 all the way to $3999 (Core i7, 2TB, 16GB). It's refreshing to see that the international prices match the Australian prices. Lately we've some some horrific mark-ups including this 241% example from Dell and with this Thinkcentre AIO from Lenovo.

An alternative choice is Dell’s similarly-specified refreshed XPS 13. It costs $200 more at $1,999 and comes with Dell’s excellent on-site warranty – although these days you have to pay more for that to last more than just one year. Venom offers a face-to-face (you travel) warranty with (120-days phone support).

We really like the Venom. While some of the top-end major manufacturers have been impressing the heck out of us with their ultraportables lately (think HP’s Elite series) these are much more expensive and nowhere near as powerful. Venom is more than just a minor manufacturer in a sea of mass-market competitors, it’s offering something that bit different, and as a result we’d happily recommend this laptop to anyone wanting portable power without all the bells and whistles.