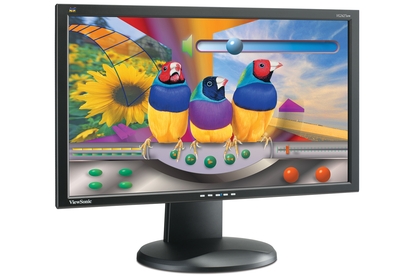 ViewSonic's VG2427wm LCD monitor is a capable, if not outstanding performer. The lack of HDMI is a real shame, as otherwise, the monitor would have been ideal for use with the latest high definition gaming consoles.

A full HD LCD monitor boasting solid, all-round performance, ViewSonic's VG2427wm may not look the part, but it provides good image quality. Unfortunately, the decision to not include an HDMI connection may be a deal breaker for potential customers.

Aesthetically, the ViewSonic VG2427wm isn't anything special, with a bland black design. The 23.6in LCD monitor has a matte black bezel and matching stand, and the screen itself also has a matte finish — this means that reflective light isn't an issue, unlike many glossy screens. The stand allows the VG2427wm LCD monitor to swivel 180 degrees and tilt 25 degrees, but it doesn't pivot and we think it should sit a little lower than it does. The stand itself is bulky and its large circular style base takes up quite a bit of desk space. The good news is the VG2427wm LCD monitor is wall mountable using a standard VESA mount.

The ViewSonic VG2427wm's controls sit in the middle of the bottom bezel and are straightforward to use. A small blue LED denotes the power and the buttons are easy to press despite their small size. ViewSonic doesn't include any preset image settings (such as text, Internet or gaming), but you can manually adjust the colour, in addition to the standard brightness and contrast settings.

The ViewSonic VG2427wm LCD monitor has DVI and VGA inputs, but HDMI is a big omission, especially considering this is a full HD monitor with a resolution of 1920x1080. The lack of HDMI means users needing a monitor to use with the latest high-definition gaming consoles, such as Microsoft's Xbox 360 and Sony's Playstation 3 , would be best advised to look elsewhere.

The lack of HDMI is a further shame when considering the ViewSonic VG2427wm's image quality and motion performance. Although it's not outstanding, it comfortably handles colour, text and motion, providing a solid performance overall. Text in particular is clear and sharp with no visible aberrations and fast motion is similarly impressive. We didn't experience any ghosting or lag, despite the fact that the VG2427wm's 5ms response time is a little slower than many competing monitors — such as AOC's Angelo 2434pw that boasts a 2ms response time.

The ViewSonic VG2427wm isn't without its flaws. We did note some minor backlight bleeding at the edge of the screen and it does tend to struggle with blacks and dark greys, often failing to distinguish between the two. It's viewing angles aren't great, especially horizontally. Text becomes unreadable and colours wash out when viewing from non-optimum angles, although this is somewhat expected from a TN panel.