ViewSonic's VNB101 is a 1.1kg netbook that ultimately fails to satisfy If you're looking for a thin and light netbook, ViewSonic's 1.1kg VNB101 does have some merit, but it also has a few drawbacks. You only get two USB 2.0 ports, its SD card slot is located in an awkward position, and its battery life was short of two hours in our tests. It does look decent, though, and it comes with a version of the Linpus Lite operating system pre-installed, in addition to Windows XP.

ViewSonic's VNB101 netbook won't turn many heads, but it's a decent, albeit quirky, little laptop for users who want something small and reasonably easy to use. It runs Windows XP, but it also has a version of Linux installed that you can boot into quickly if you don't need to use anything more than Web-based applications.

It's a 10.1in notebook with a native screen resolution of 1024x600, and its specifications are nothing out of the ordinary. You get an Intel Atom N280 CPU (which runs at 1.66GHz and has a 667MHz front-side bus), 1GB of DDR2 SDRAM (it has only one slot for memory and therefore a maximum capacity of 2GB), integrated Intel GMA 950 graphics, and a 160GB SATA hard drive.

It performed slightly slowly in our tests considering it has the faster of the two popular Intel Atom CPUs (N280 as opposed to N270). It took 8min 01sec to encode 53min worth of WAV files to 192Kbps MP3s in iTunes, which is slower than we were expecting. Netbooks with a 1.66GHz CPU generally perform this task 10-25sec quicker. Nevertheless, the ViewSonic VNB101 felt responsive during our test period and it will be fine for browsing the Web, creating documents, watching downloaded videos, listening to music and viewing photos.

Perhaps the most interesting feature of the VNB101 is its built-in Linpus Lite-based operating system. This is a Linux-based operating system that resides on the hard drive. It allows you to quickly boot into a basic environment from which you can browse the Web, use Skype or log in to instant messaging accounts (via Pidgin). 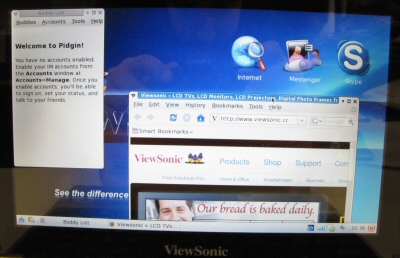 You can load Linpus by selecting the 'Internet, Messenger, Skype' icon from the boot-up splash screen when you first switch on the VNB101, and it takes approximately 21sec for the netbook to boot it.

There are few things about the netbook's design that aren't standard fare. It has edge-to-edge plastic on its LED backlight–based screen, which is similar to the look of the HP Mini 2140. With this design there are no edges around the screen for dust to accumulate. It's also a glossy screen, and if you watch movies on it anywhere near lights or outdoors, you will notice plenty of reflections. Another thing you'll notice is the alloy palm rest, which doesn't look too bad and feels nice and smooth.

The VNB101 netbook only has two USB 2.0 ports, with one located on the left (next to the audio ports) and the other on the right. This can be inconvenient if you ever have to plug in an external hard drive that requires two USB ports (one for power and one for data). There aren't any other ports or slots along the sides. This makes the VNB101 look very plain, rather than sleek. The rear of the netbook has a D-Sub port, a 10/100 Ethernet port, and an SD card slot. 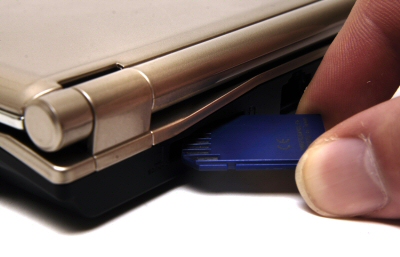 The SD card slot is awkward to access and requires you to plug in your SD card upside down. We'd prefer if it was located on one of the sides.

The keyboard has keys that are 16.5mm wide, and none of them are in awkward positions. The keyboard bounces slightly when you hit the keys, which is annoying, but overall it's a reasonably comfortable keyboard to type on. The touchpad is big (7.5x4.2cm), and it supports gestures. You can zoom in or out by pinching your fingers and you can also rotate photos and flick backwards and forwards through a series of photos in Windows.

At 28mm, the VNB101 is approximately the same thickness as most other 10in netbooks on the market, but it has tapered edges that make it look a little thinner at the front. It weighs just 1.1kg. There are vents on the bottom of the chassis near the hard drive and RAM, and there is also a vent on the spine that works in conjunction with a fan to keep the CPU cool. It does make noticeable noise (it's probably the loudest netbook fan we've encountered), but the overall result is that the netbook's base (even the battery) stays relatively cool even after it's been working for almost a couple of hours.

The battery is located under the base of the VNB101, rather than on the spine, and it's a slim and light 3400mAh (milliamp hour) battery that's based on lithium-ion polymer technology. ViewSonic says it can last 20 per cent longer than competing 3-cell batteries, but this claim doesn't stack up against many of the 3-cell netbooks we've tested.

The VNB101 lasted 1hr 57min in our video rundown test, in which we disable power management, enable the wireless radio and maximise the screen brightness. This is short of the 2hr 10min we saw from the Acer Aspire One AOD150 and the 2hr 24min we saw from the ASUS Eee PC S101H, for example. However, it lasted 15 per cent longer than the MSI Wind U123T, which recorded a time of 1hr 43min in the same test. Nevertheless, the VNB101's battery life did fall slightly short of our expectations.

With an RRP of $699, the ViewSonic VNB101 is priced at the same level as many of the other notebooks in its class. It's not a bad netbook overall, but it's not as refined as its competitors. It has a slightly shorter battery life; it only has two USB 2.0 ports (most netbooks have three); it has a relatively loud fan; and its SD card memory slot is located in an awkward position. It does have some redeeming features: the (limited) Linpus Lite operating system, a weight of 1.1kg, a touchpad with gesture support, and a reasonably vibrant physical design.