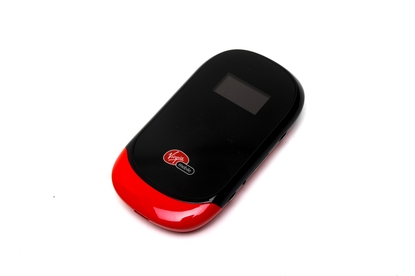 The Virgin Mobile Mini WiFi Modem is compact, easy to set-up and can support up to eight devices. However, the Optus network used by Virgin isn't as fast or reliable as we'd like and the modem does get significantly warm when in use.

Virgin Mobile's new battery-powered Mini WiFi Modem allows up to eight devices to connect to it wirelessly for shared mobile broadband access. The Optus network used by Virgin isn't as fast or reliable as we'd like, but the Wi-Fi modem itself is convenient and relatively easy to use.

The Virgin Mini WiFi Modem is a very compact device. The ZTE manufactured modem is smaller than a deck of cards and finished in Virgin's black and red branding colours. A small button on the right powers the modem on and off, but you annoyingly need to hold it down for a few seconds if you're switching it on. A WPS button enables Wi-Fi Protected Setup, while a microSD slot is wedged in between. When connected over Wi-Fi, multiple devices can access the content of the microSD card.

There's also an external antenna jack on the left side of the Mini WiFi Modem. It's concealed by an annoying plastic flap but it's handy for boosting reception if you're in an area with minimal or weak coverage.

The key feature of the Virgin Mobile Mini WiFi Modem is a small OLED screen on the front. It displays signal strength, network service (GSM, 2G, 3G), the amount of devices connected to the modem, a battery indicator, your connection status and a scrolling SSID. The screen makes using the Mini WiFi modem a fairly straightforward affair.

A small button on the right powers the modem on and off, and there's also a microSD card slot and a WPS key

Virgin says the Mini WiFi Modem has a wireless range of up to 25 metres, but we found the signal strength started to deteriorate after about 20 metres. It worked without any issues up to this distance through the internal walls of an office and a brick veneer home.

Using the Virgin Mobile Mini WiFi Modem via Wi-Fi requires no installation, though you'll first need to register and activate your SIM card through Virgin's Web site. A wired connection requires the installation of software but this available on the modem itself and it works on both Windows and Mac OS X machines. When connected via USB, the modem's built-in battery will be charged while still allowing Wi-Fi access.

If you're in an area serviced by decent Optus coverage you should find that data speeds are reasonable. In our North Sydney office, with full five bars of 3G reception, we managed to achieve downloads speeds of up to 7.3 megabits per second (Mbps) but regularly hovering around 5Mbps. Upload speeds were also relatively stable at around 1Mbps. We didn't notice too much difference in speed between a wired and a wireless connection, provided the modem was situated less than 15 metres from our test notebook. Network speed does suffer slightly when four or more connected devices are downloading files at once, but this is likely to be a rare situation in real world use unless you're sharing the modem in a household, for example.

The Virgin Mobile Mini WiFi Modem is simple to set up. Its default SSID and WEP key are printed on the label under the battery. You can change these settings through the built-in Web interface if you wish. This is available by typing the unit's IP address into the browser of a connected computer. WEP, WPA and WPA2 encryption are all supported and you can also choose whether or not you wish to broadcast the SSID.

Virgin claims the modem has a battery life of up to four hours. This seems to be a continuous use figure though, as we managed almost a full day's use (primarily conducting basic Web browsing periodically) before the battery needed to be recharged. Like many other Wi-Fi modems, the Mini WiFi modem does get significantly warm during use.

The Virgin Mobile Mini WiFi Modem is available for $99 which includes 4GB of data with a 30 day expiry. Recharge pricing ranges from $15 to $199 with varying data allowances and expiry length, though the company also offers a range of post-paid plans, outlined below. Virgin charges data per KB rather than per MB, which means you won't be charged for any data you won't use. 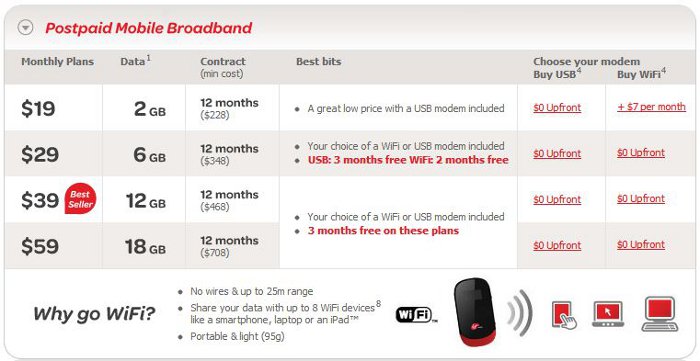 The Virgin Mobile Mini WiFi Modem is locked to Virgin's broadband service, but can be unlocked for use with another network after spending a total of $80 on recharge data.