The VisTablet Web site touts its tablet offerings as being a budget solution for non-professionals; affordable but fully featured. 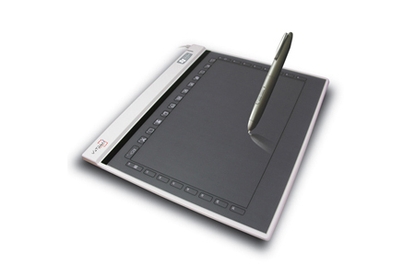 The package overall is highly usable once installed, but this is the kind of tablet you might buy for your parents or kids to use occasionally when doing basic photo manipulation, drawing or list-keeping. For professional designers, it’s far too limited in functionality, and lacks support for advanced features found in competitors’ offerings.

The VisTablet Web site touts its tablet offerings as being a budget solution for non-professionals; affordable but fully featured. The two models currently available are the Original 12W, which features a 12.1-inch widescreen-shaped area of sensitivity, and the diminutive Mini Mouse, which has a 3x5-inch drawing surface. Prices are competitive at US$130 for the 12W Original and $80 for the Mini Mouse.

Both feature an impressive 1,024 levels of sensitivity, customisable ‘keys’ (12 for the mini, 29 for the 12W) and a low-profile design that sits comfortably on the desk. Each ships with a Boss pen that, unfortunately, requires an AA battery to operate. The battery adds a nice weight to the pen in use, but dependency on battery life is a drawback when you consider that similar products, such as Wacom’s, are battery-free.

The pen itself has a good, robust design with a rocking button to represent left and right mouse-clicks.

It comes supplied with two spare nibs and a nib-removal device. In use, the pen feels pleasant. The nib has give, transmitting the pressure you exert as you make marks. There is a driver setting to adjust pen sensitivity, but this doesn’t appear to have any effect on the characteristics of use whatsoever. The pen lacks an eraser, though, and there’s no support for pen tilt.

On the tablet itself, the hotkeys are entirely pen-activated, making them useful for macros, but meaning you can’t use them as modifier keys while drawing with the pen. There’s no scroll wheel or hardware buttons, so you’ll want to keep hold of your mouse.

The supplied software allows you to set up actions for the hotkeys, but again this is limited in scope; actions can be assigned on a per-application basis, but only where you could perform the same action using a keyboard shortcut – the driver sends a simulated keystroke when you press on the hot area.

In use, the tablet is smooth and lag-free; it feels robust in tracking and translating hand movements.

For Mac users, the only software supplied is the driver for Mac OS X 10.3 and 10.4; users of 10.5 will need to download the latest VisTablet software from the website to avoid an irritating glitch that takes you into a never-ending loop during installation.

For PC users, there is a variety of supplied software that helps you take advantage of the built-in tablet support found inside Vista. This cements the impression that the product is orientated towards non-design professionals.

The package overall is highly usable once installed, but this is the kind of tablet you might buy for your parents or kids to use occasionally when doing basic photo manipulation, drawing or list-keeping. For professional designers, it’s far too limited in functionality, and lacks support for advanced features found in competitors’ offerings.

The range of sensitivity is at the upper end of the graphics tablet scale, but for a similar price you can get extra functionality by choosing something like a Wacom Bamboo.