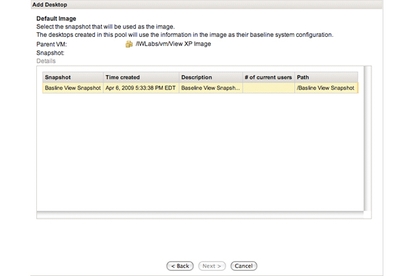 All in all, VMware View is a functional VDI implementation with more than a few quirks and foibles.

VDI (Virtual Desktop Infrastructure) is seen by many to be an answer to the age-old problem of delivering a solid desktop experience to users without the administrative burden or costs associated with maintaining a physical desktop. Using a mixture of existing technologies, VDI enables users to log into a server-based Windows desktop session via a Web browser or Java client running on thin or fat client hardware. The virtual desktop promises users the same familiar Windows experience, while giving administrators central management and greater control.

I recently tested VMware's VDI solution, VMware View 3, both in the lab and in a pilot deployment on production hardware with real users. (I evaluated VMware View's chief rival, Citrix XenDesktop 2.0, in September.) The reality of VMware View is that it does work, but the management leaves much to be desired, and the user experience can be spotty.

Installation of View on an existing VMware infrastructure is accomplished by running the VMware Composer installer on an existing VMware vCenter Server, and then building a Windows server as a VM to run the actual VMware View services. This server becomes the View broker and is responsible for accepting user log-ins and directing them to their desktop once they've successfully authenticated to the system. The VMware View server does not have to be a VM, but it makes the most sense to do so.

Once the View server has been built, all administration of the VMware View infrastructure is accomplished not through the VMware Infrastructure Client, but through a Web interface hosted on the View server itself. This is a significant departure from the rest of VMware's offerings, which have included Web management but are generally managed by a central client. Given that vCenter Server supports plug-ins, it's curious that such a significant infrastructure component is not centrally managed.

Nevertheless, some functions were just messy. For instance, hitting enter instead of clicking OK after filling out a text field in a JavaScript config dialog might drop you back to the main admin page, losing all the configuration parameters you may have entered or changed. All in all, not a reassuring situation when you're dealing with what might be a few hundred user desktops.