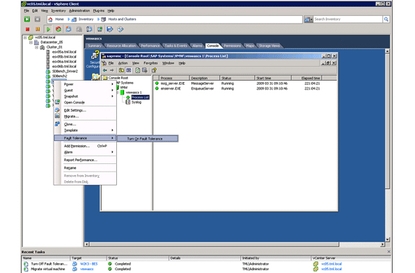 VMware vSphere 4, out today, is a big release, with plenty of new features and changes, but it's not your run-of-the-mill major update. The new features, which range from VM clustering to agentless VM backup, are especially significant in that they may mark the moment when virtualisation shifted from the effort to provide a stable replica of a traditional infrastructure to significantly enhancing the capabilities of a virtual environment.

In short, if you're running a VMware infrastructure, life should get easier. For anyone who's ever tried to provide rock-solid OS-based clustering services, the new VM clustering feature, called Fault Tolerance, should be a vast improvement. Hot Add of CPUs and RAM has never really been an option for most shops, but it suddenly is (with the right OS, of course). These moves show that VMware is still pushing the virtualisation envelope.

Considering the scope of the upgrade, perhaps "VMware Infrastructure" did warrant a new name, but let's hope that VMware stops there. The company has a bad habit of changing the names of its products every few months, and it's getting tiresome trying to explain why VirtualCenter, vCenter, VI3, V3i, ESX, ESXi, and now vSphere are all basically the same product or parts of the same product suite.

Along with new features and improvements, vSphere brings more hardware resources to VMs. You can now add up to eight vCPUs to a single VM; previously, VMs were limited to four. The new RAM limit is 255GB, up from 64GB. The ESX hosts themselves can now support up to 64 cores and 512GB of RAM. Also — though I haven't had a chance to test this — it appears that you can map raw PCI devices to a specific VM.

VMware's also making some noise about performance enhancement for key technologies, such as claims of 20 percent performance improvement in Microsoft SQL Server throughput, and a claim of a 10x performance bump for iSCSI. That last claim may be just a bit exaggerated, as it appears to be based on the support of 10Gig iSCSI interfaces, rather than an improvement in VMware's internal iSCSI software initiator, which has always been a bit sluggish.

Speaking of performance, the performance graphs and data available in vSphere is much improved over the current release, with a more intuitive layout and better overall access to specific information regarding the performance of a VM or a host.