A social-networking aggregation application for the iPhone, Vodafone Update combines Twitter, Facebook, MySpace, LinkedIn and Twitpic accounts into one interface. 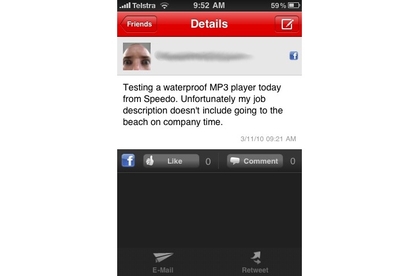 Vodafone Update for iPhone lacks some features which heavy social-network users might find critical, but it's an easy and effective way to keep updated with multiple social-networking services. And it's free.

Social networking is serious business these days and, with many people using multiple Web sites and services, it's hard to keep up. A social-networking aggregation application for the iPhone, Vodafone Update combines Twitter, Facebook, MySpace, LinkedIn and Twitpic accounts into one interface.

The first time you fire up the Vodafone for update iPhone app, you'll be asked to enter your account details for the services you want to access. Once you've added your accounts and given permission for the app to access them, you'll be see what looks like a regular list of tweets, but with Facebook, MySpace and LinkedIn updates also displayed. A small icon on the right side of each post denotes which service an update is from.

Despite the aggregation of up to four social-networking services, Vodafone Update's interface is clean and easy to read. It has a similar look and feel to Tweetie 2, albeit without the scrolling down to refresh the list. Even if you add all available services, you can choose to view updates from just one or two, simply by tapping the relevant icon at the top of the friends list. Tapping on an update takes you to a "details" screen where you can "like" the status update or add a comment if its from Facebook, or reply, send a DM, add as a favourite, or view a user's profile if its from Twitter. You can also e-mail and retweet both Facebook status updates and tweets from the details screen.

The Vodafone Update iPhone app also allows you to update your Facebook status and send a tweet simultaneously. Tapping the "write update" button in the top right corner opens a text box where you can enter your update using the standard iPhone keyboard layout. Using the options menu, you can shrink a URL, upload or take a photo using Twitpic and geotag your update. You can also choose to send a just tweet or a just a Facebook status update by un-checking either the Facebook or Twitter icons above the keyboard.

Below the main screen you can switch between your list of friends, Twitter mentions, direct Twitter messages and Twitter search. The Twitter messages screen doesn't show Facebook private messages. In the 'more' tab you can see current Twitter trends, add or delete your accounts, go directly to a friend's profile, read your tweets, and see a list of nearby tweets (provided your iPhone's location services setting is turned on).

A critical feature missing from Vodafone Update is the ability to add multiple Twitter accounts, so this effectively rules out the app for those who may have a work and a private account, for example. It's also limited as you can't save searches in Twitter, can't access or edit lists and there is no way to save a potential update as a draft. There is also no option for push notifications.

Vodafone Update is also available for Android, BlackBerry, and Symbian S60 smartphones and can also be downloaded as a desktop client for your PC or Mac.