KeepSolid's VPN is simple, the speeds are fine, and the price is right, including a crazy lifetime offer. VPN Unlimited offers flexible pricing, it works with Netflix, and has usable speeds. Privacy-conscious users may not like some of the minimal data the company collects, but overall it's a good service.

KeepSolid's VPN Unlimited hasn't changed much since we last looked at it (though it does have WireGuard now), but what's changed is everything around it. KeepSolid still wants to sell VPN Unlimited as one part of a larger service, but those accompanying bits are much more focused on security now, with add-on options such as a password manager, DNS firewall, and a Smart DNS service for bypassing geographic restrictions on set-top boxes and other devices. 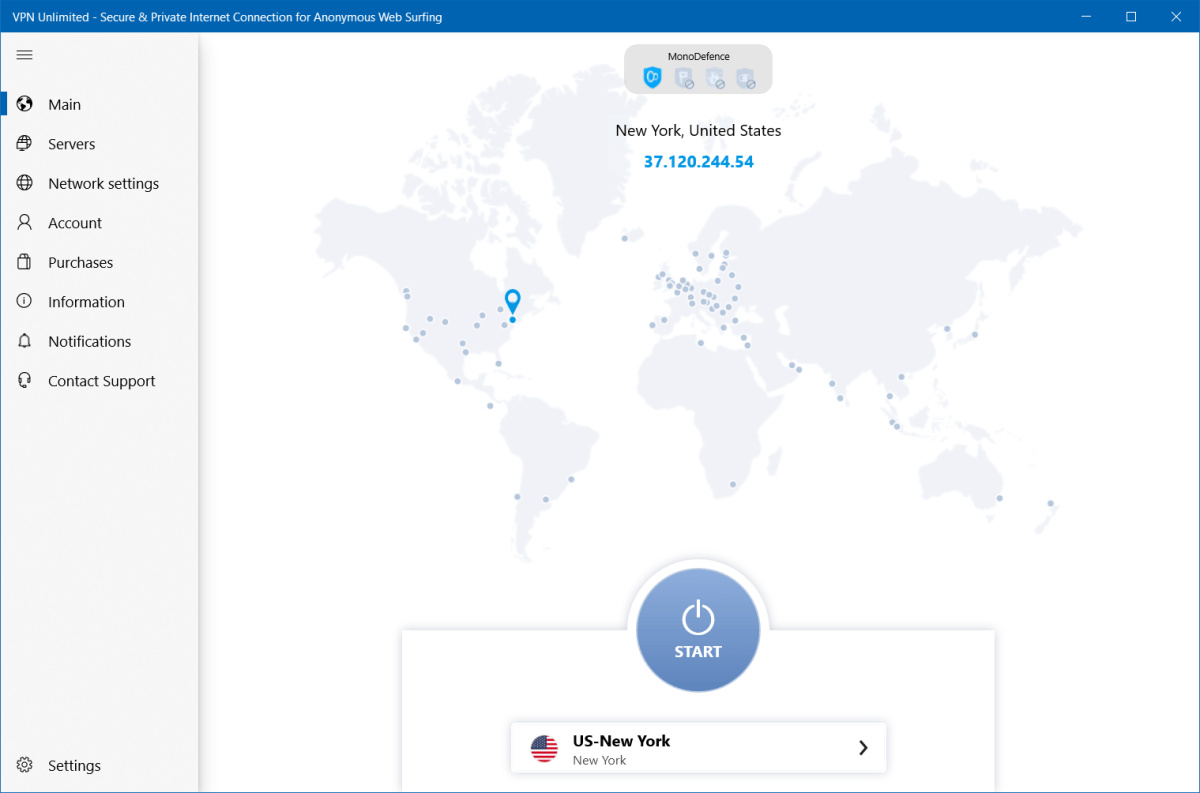 VPN Unlimited offers two types of apps: a traditional desktop app and a Windows Store app. Between the two, I'm partial to the Windows Store app. It's easier to navigate, and it looks better. When you first open the Windows 10 app you're greeted with a world map showing your location as well as the potential connection points for the VPN. The map isn't interactive, but purely informational, showing your home IP address and the IP address you're connecting to, with an arc drawn between the two points.

To select a server, you can either hit the Servers menu option in the left rail, or click on the current-location tile at the bottom of the main screen. VPN Unlimited offers 58 country options, as well as several streaming-specific servers for BBC iPlayer, Disney+, Netflix U.S., HBO Now, Hulu, and Sony Crackle.

One thing I miss that the app no longer displays is the workload of the current server. Instead, it now displays a set of reception bars similar to what's on your cell phone to give you an idea of how usable each server is from your location. The traditional desktop app also does this now. It's fine, but I did prefer the old method.

VPN Unlimited allows torrents on specific servers that are marked as such in the list. The server section also has tabs for favorites, and all the streaming options.

VPN Unlimited also now lets you choose your own protocol. By default it'll choose whatever works, but if you'd like to specify, the VPN supports WireGuard, IKEv2, OpenVPN, and the company's own KeepSolid Wise.

That's about it for features. The rest of the app's menu options are for renewing your subscription, getting add-on purchases such as a DNS firewall, a password manager, and Smart DNS, and managing your account. The settings section is also pretty light in the Windows 10 app, with the option to use the light or dark mode, and an option to run the app on startup. There's no internet kill switch in the Windows 10 version, but if you need that, it's in the traditional desktop app.

VPN Unlimited is priced at US$60 / AU$80 a year for five devices, US$140/ AU$199 for a lifetime subscription (at this writing), or US$10 / AU$12 per month on a month-to-month plan. KeepSolid also offers the aforementioned extras (Passwarden, DNS Firewall, and SmartDNS) for an extra US$1.66 per month.

VPN Unlimited's speeds dropped quite a bit since the last time we tested it. In our tests, we got just 19.81 percent of the base speed across five locations over multiple testing days. That's quite a drop from the 35 percent we saw last time. Scores were brought down by lower performance in Australia and Japan, as well as some inconsistent speeds in the U.S. and Germany.

Overall, the speeds were usable for streaming and other uses.

Still, the company does collect some information from VPN users, the company said, including your device ID, operating system and its version, number of connected devices (to keep your account within its limits), and your email address.

KeepSolid accepts payments via Bitpay, credit card, Google Pay, PayPal, and Paymentwall. The company CEO is Vasiliy Ivanov, and the company's official business address is in New York City, though most of its team and leadership are based in the Ukraine.

VPN Unlimited offers usable speeds, and the app is easy to use. I'd still like to see that map become interactive, but that's not a deal killer.

Its privacy policy is good, with minimal data collection. For anonymity it would probably be better if the company didn't collect your device type or require you to log in with an email address. But account sign-in is pretty much the standard for VPNs.